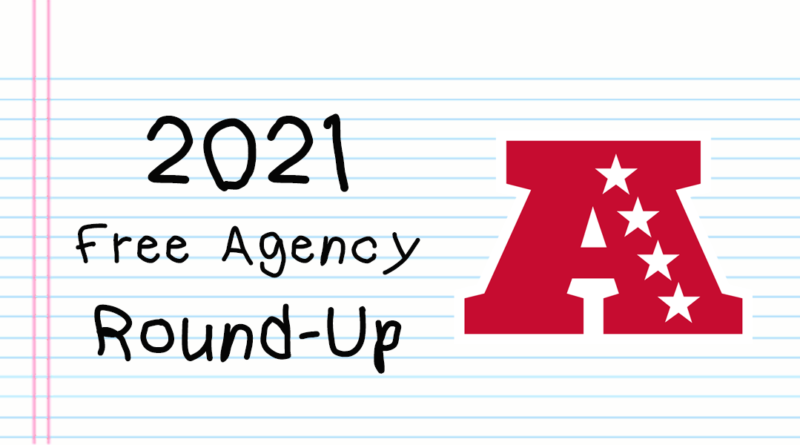 Pros: Cam Newton struggled throughout the 2020 season due to injuries and Covid. The positive to him being back with the Patriots this year is that he will have another year under his belt in the Patriots system. The Patriots have also been very active in this year’s free agency, their acquisitions include Jonnu Smith, Hunter Henry, Nelson Agholor, and Kendrick Bourne. At the moment, Cam is set up to have a better chance at success this season.

Cons: Cam is old, and his days of using his legs as he did in the past are over. The real issue at hand is whether or not the Patriots are going to draft a quarterback in the first round of this year’s draft or not. If they do, Cams’ days as the QB1 in New England may be numbered.

2021 Outlook: Unfortunately Cam is no longer the same quarterback that we knew and loved in the past. To rely on Cam any certain week would be too risky. He is a mid-tier QB2 with limited upside heading into 2021.

Pros: The Houston Texans are a mess and that is being nice. The situation with Deshaun Watson is murky at best. The fact that Tyrod might be a starting quarterback in 2021 is pretty much the only positive about the situation.

Cons: It’s Tyrod in Houston with 3 running backs, Brandon Cooks, and a bunch of WR4’s. Even if he does have the starting job come September, you’re not going to want to start him on any given week. Even in 2 quarterback leagues, the upside isn’t there. Tyrod would be a weekly desperation play at best.

2021 Outlook: Tyrod is no longer the mid-tier QB2 that he was in Buffalo. He is a low-end QB2 and more likely on the QB3 spectrum if he does get the starting job in 2021.

Pros: Drake got a 2 year deal for $14.5 million. That is as positive as I can be about the situation.

Cons: The running back landscape is always extremely thin, so whenever a decent running back ends up in a backfield with another solid running back we are always left annoyed. Not only is Drake’s fantasy upside depleted but his addition to the Raiders has a negative impact on Josh Jacobs ability to succeed as well. The Raiders have also let go or traded most of their offensive line this offseason. The combination of those two factors leaves me wanting to stay away from the Raiders backfield.

2021 Outlook: It will be a bleak season in Las Vegas for both Drake and Jacobs from a fantasy perspective. They should cap each other’s upside and will leave fantasy managers disappointed on a weekly basis. Drake is an RB3/low-end Flex heading into 2021.

Pros: We all knew a running back was going to be signed by Jacksonville, we just didn’t know which one. The good thing about them signing Hyde is that it gets Hyde onto an up-and-coming team with the potential of having a decent workload every week. We also have the comfort of knowing that James Robinson should continue to be the RB1 in Jacksonville, as Hyde is no longer a real threat for a starting workload.

Cons: Hyde’s ceiling is ultimately capped as the Jaguars should rely upon James Robinson for most of the work this upcoming season. The addition of Trevor Lawrence should also mean that the team will be more pass-heavy than they were in previous seasons as well. Hyde is merely a backup running back unless an injury occurs.

2021 Outlook: Hyde will be an RB3/ flex with upside on any given week. I could see him being a touchdown vulture but knowing when that will happen will be too random to start. He is a high-end backup in 2021.

Pros: Philip Lindsay is gone, which means the RB2 role behind Melvin Gordon is up for grabs. If I had to choose between Boone and Royce Freeman for that position, I would lean Boone. Freeman has had the chance to succeed in this offense and was never able to keep the job. Unless they draft a running back reasonably high in the draft, Boone should slide in as the RB2 in Denver.

Cons: How much is the RB2 job in Denver actually worth. If we go off of last year, it ultimately didn’t provide a ton of upside. The main upside that comes along with being an RB2 in an offense is if the RB1 is out due to injury or other reasons. Chances are that Melvin will be perfectly fine and will be the lead back for the Broncos at least for the 2021 season. This means that Boone will be left as purely a high-end backup this upcoming season.

2021 Outlook: If Boone does receive the RB2 role behind Gordon, he could very well have weekly RB3/low-end flex value. He will also serve as a high-end backup. If there was an injury to Gordon, Boone should be able to fill the leading role.

Pros: JuJu signed a one-year deal with the Steelers over signing with the Chiefs and Ravens. He obviously believes in himself and that he will be able to get a better deal in 2022. This means that hopefully, he is planning on balling out in 2021. JuJu has plenty of competition but he also is in a situation to succeed. Big Ben and the Steelers still have some gas in the tank, they should be able to compete in 2021. JuJu will have plenty of opportunities to succeed this season.

Cons: JuJu has not been the stud that we had hoped he would have been. Now instead of having a fresh start somewhere else, he is back in the same situation as last year. The concern is did anything really change, and most may say the answer is no. Chase Claypool and Diontae Johnson’s presence are enough to not trust JuJu in 2021. The only benefit to the whole situation is that Juju’s price in 2021 might be worth the risk, versus where he was drafted in previous years.

2021 Outlook: JuJu is in a crowded receiver group with two other wide receivers who I believe have more upside than he currently does. He has WR2 talent but may very well be the WR3 on his team. He is a high-end WR3/ flex going into 2021.

Pros: Fuller successfully got out of the Houston Texans organization! That is worth celebrating by itself. He is now in a great position to succeed and should be a quality piece of the Miami Dolphins offense. The Dolphins should be a contender in 2021, which means that Fuller should have a chance at being everything we want him to be.

Cons: Fuller will be out for at least 1 game in 2021 that we know about due to his PED’s issue. We already know that he also has quite the injury past, so he could certainly be out for more than just 1. We also don’t know how much of an effect being off of the PED’s will have on Fuller (just ask Mark Ingram).

2021 Outlook: Fuller has the upside of being the WR1 for the Dolphins. Tua should develop in his 2nd year which means Fuller should be able to rely on a decent target share in 2021. Fuller is a low-end WR2 with upside this upcoming season.

Pros: We have seen success with big, tall wide receivers in New York. Currently, there are no other wide receivers that really scare me away from Davis currently. He should come in and be the top target for whoever is throwing him the ball. He showed decent progress last year with the Titans and I like his current value. He should be a great late-round pick in 2021.

Cons: It is Corey Davis. We certainly know his floor. We also know that the Jets QB situation isn’t set in stone as of yet. Davis’ 2020 production could have certainly been a fluke. He is a

2021 Outlook: Davis can very well be the WR1 for the New York Jets. It really depends on what the Jets do in this year’s draft. Drafting a top 3 round wide receiver is definitely a possibility. We also don’t know just yet who will be passing the ball to Davis in 2021. Davis is a low-end WR3 with upside.

Pros: Both Jonnu and Hunter were the top two tight-end free agents heading into 2021’s free agency. Who would have ever thought that they would end up on the same team( I guess Bill did)? The fact is that they should both act as the top two targets for the Patriots in 2021. They are definitely two of the best pass-catchers currently rostered. It will be interesting to see if one of them separates themselves from the other. If I were a betting man, I would roll the dice on Jonnu over Henry.

Cons: The Pros and Cons go hand in hand in this situation especially. The fact is that if it were just one or the other, it would be much easier to trust them in fantasy. That is not the case, both Henry and Smith are the starting tight end in New England. There is a real possibility that they will cancel out their upsides because there will not be enough to go around. It is also fair to state that Cam Newton is on the downturn of his career and does not usually support a top-tier tight end, let alone two.

2021 Outlook: Both Jonnu and Hunter are top-tier tight ends. They certainly both offer upside and could be the top two targets for their new team in 2021. They are both low-end TE1’s heading int0 2021.

Pros: New offense with an up-and-coming QB and no real competition at the tight end position. Cook fell into yet again another great situation. He should be a safety blanket across the middle and in the RedZone for Justin Herbert. Even at his age, Cook should be able to muster up one more fantasy-relevant season.

Cons: Cooks is 33 and is nearing the end of his career. Maybe he won’t find a connection between Herbert and himself. There is always the chance that he does not have anything left in the tank. There is also the chance that if there was some way that Kyle Pitts fell to 13, the Chargers would draft him. Ultimately I find all the possibilities that I listed to be unlikely.

2021 Outlook: Cook should slide in as the TE1 in LA with no problem. He very well could be the 3rd highest targeted pass catcher for Justin Herbert after Keenan Allen and Austin Ekeler. He is a high-end TE2 with an upside in 2021.

Please make sure you are following me on Twitter at @JGalt93 as well as the podcast handle at @TheHateful8FF!