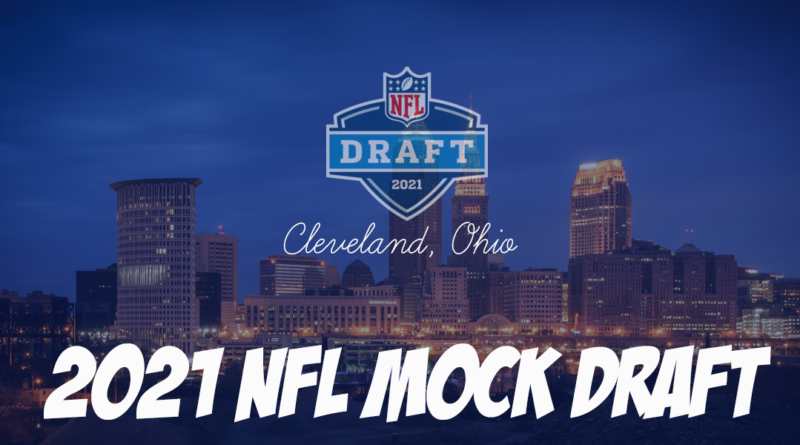 We made it everybody, the NFL draft is in our sights. With the draft comes the hottest new 1)craze: Mock Drafts. I’m not the type of person who likes to post a different mock every week based on all the rumors & coach-speak because without being in the know it is almost impossible to determine which comments are true and which are smokescreens purposely leaked. The NFL draft is truly a 4D game of chess for NFL teams, trying to get other teams to think they know what your plan is while really going in another direction completely.

Due to Covid and a limited college season, the 2021 draft will be harder to predict than any draft before it. No annual scouting combine and proper medical checks will leave most in the dark of not knowing if any prospects have medical flags or character flags after teams being able to sit and talk with them. No excuses though, I will give it my best shot based on what I think will happen. Here we go…

Write this one in pen. We’ve known Lawrence was going to be the first pick overall regardless of who was making this pick.

This pick can also be written in pen. The Jets new coaching staff & front office have apparently been enamored with the BYU QB. They make him the second QB taken.

Vegas has Mac Jones as a –350 favorite to be taken 3rd overall. The house always wins. As much as the front office may want Trey Lance I don’t think you can force a prospect onto a coach. Shanahan gets the guy he was confident enough to move 3 1sts for.

**MARVEL SPOILER ALERT** Kyle Pitts landing in Atlanta would be a dream for Marvel as they find their next superhero to play “The Falcon”. Ok kidding aside, with the rumors swirling about Atlanta potentially listening to trade offers on Julio Jones and the tight end position being more vital in offensive schemes there is no better fit than Kyle Pitts.

With such a deep offensive line class the Bengals wait until later to find some added protection for Joe Burrow. There aren’t any other wideouts in this class on Chase’s level and reuniting Burrow with his #1 target from college is too tempting for the Bengals to pass up.

Trading Ereck Flowers back to Washington and moving Robert Hunt back to his natural guard position locks this pick into place. I am a big Rashawn Slater fan as well but I believe Sewell is the best pure offensive tackle prospect in this class. Protecting Tua has to be a priority for the Fins, they chose to grab some offensive weapons for him later.

Detroit is the obvious trade back spot inside the top 10 for teams looking to make a jump up for a quarterback. Washington pulls the trigger here and Ron Rivera gets his QB whose game is very similar to another QB to play under Rivera: Cam Newton. Lance can sit for a few games to learn behind Fitzpatrick before taking the reins.

Carolina traded for Sam Darnold who is still only 23 years old. I don’t believe the smoke that they will take a QB this early with so many other holes on the roster. In this mock, Carolina does their best to protect Darnold and also beef up a weak spot on their roster. Slater’s ability to play inside or out gives them a ton of flexibility. This move doesn’t only help Darnold but McCaffery as well.

New England makes their move and nabs a falling Justin Fields. A perfect scenario for Fields who can sit behind Cam to learn the nuances of Mcdaniel’s offense and for New England who hopes they have their long-term answer at the QB position.

I really wanted to take Patrick Surtain II here but with the retirement of Sean Lee and Leighton Vander Esch’s health issues, the cowboys take the top linebacker in the class who they can plug and play. Having an LB group of Jaylon Smith, LVE, and Parsons would be one of, if not the best, group in the league

I had Devonta Smith locked into this pick the whole pre-draft process until the Giants signed Kenny Golladay in free agency. All this offense is missing is a speed element, Waddle adds just that. There will be no excuses for Danny Dimes with the weapons surrounding him.

The Eagles were a tough pick. They can go in so many different directions with holes all over the roster. It doesn’t sound like the Eagles are fully sold on Jalen Hurts as a long-term solution at QB so I don’t believe they’ll add another weapon for him. Getting the top corner in the class will help solidify an area that has been an Achilles heel for a long time.

When you find a young franchise quarterback you have to do everything you can to protect him. The Chargers get a stud tackle to protect Justin Herbert to help him further his game. Chargers fans rejoice as the team finally addresses a position the team has failed to beef up in previous years.

As a Viking fan, I can tell you Rick Speilman aka Trader Rick loves to accumulate draft capital. He acquires more picks here by trading back with the Ravens who move up to stop the fall of the Heisman-winning wide receiver while getting Lamar Jackson an alpha wideout.

I know the Broncos fans are craving one of the top 5 QBs in this class. I think George Paton will give Drew Lock another chance to prove himself but will add a veteran quarterback in case if Lock falters. This scenario sees the Broncos further adding to their defense and helping Vic Fangio build an elite unit as he had in Chicago.

The Cardinals have addressed every level of their defense this offseason except for the cornerback position. Adding Newsome gives them a corner to come in to replace the departed Patrick Peterson and give the Cards the beginnings of a scary-looking defense.

I don’t think it’s easy to predict what the Raiders will do any given year in the draft. They constantly surprise and reach for players. They went offense-heavy in the 2020 draft and didn’t live up to expectations thanks to a horrible defensive unit. Honestly, I could see them going with any defensive player here, but Collins helps to be a do-it-all linebacker.

You can never have enough pass rushers. Phillips is solid against the run as well, exactly the type of player Brian Flores looks for in a defensive end from his New England days. Miami should be ecstatic that Phillips lands with them here.

Being in a full-on rebuild the Lions can’t really go wrong here with whoever they select. They stay in a state with this pick and land one of the top edge rushers in this class. Paye is a nice building block piece for the Lions to build their defense around.

Allen Robinson has yet to commit long term with the Bears, rumors have also been rumbling all offseason about them shopping WR Anthony Miller as well. The Bears select Rashod Bateman here to help solidify their wide receiver room moving forward.

The Colts don’t feel like they have many holes on their roster. Adding Gregory Rousseau gives them a formidable front seven on defense, while also taking some pressure off Deforest Buckner. Watch AFC South for this Colts D next year!

After basically clearing out their whole defensive back room, the Titans and Mike Vrabel take the son of Vrabel’s former teammate. I’m not sure why Samuel isn’t getting more love but I believe this pick is a match made in heaven.

Jamin Davis has been receiving more hype as the draft nears. I’ve even heard he might be the second linebacker taken. The Jets take the best player available and give Robert Saleh a quarterback for his defense.

As much as people want to see the Steelers take a running back here their offensive line desperately needs to be addressed. The Steelers take a big grinder in Teven Jenkins who will help them solidify the run more and rely on Big Ben’s aging armless. A win-win for both team and prospect.

Many will expect the Jags to take a leap next year after adding a super talent like Trevor Lawrence with the 1st pick, but people tend to forget this is a team that won only 2 games last season. Shoring up the trenches is never a bad move, and the Jags decide to do that with this pick. The snag Barmore in what is described as a very poor defensive tackle class they get the only guy with a 1st round grade.

I think this will be a popular trade back spot at the end of the 1st for a team wanting to get a guy with a 5th-year option. In this mock, Cleveland stands pat and selects their wide receiver of the future. It’s more than likely the Browns move on from Odell Beckham Jr and/or Jarvis Landry after this season, Elijah Moore gives them a young stud for Baker Mayfield to rely on in the future.

The Vikings did plenty in free agency to shore up their defense, now they need to do everything in their power to help Kirk and the offense out by helping out the offensive line. Christensen is a prospect the Vikings have been linked to, so moving back to land their guy while accumulating more picks is a no-brainer.

There are some injury flags surrounding Caleb Farley but the Saints without Drew Brees will need their defense to be better than ever and take a chance on the kid. He comes into a situation where he doesn’t have to be THE guy. This pick gives New Orleans a solid set of corners for years to come.

After last year, Packers fans want to see the team add some more weapons around Aaron Rodgers. The Packers sort of does that hereby adding some more meat up front to help protect Rodgers while also establishing the run game, just how Matt Lafleur likes it.

Josh Allen has developed into a formidable talent at the quarterback position for the Bills, but it is folly to expect him to be able to continue his pace of throwing the ball 40+ times a game. The Bills choose to add a dynamic running back here to help take some pressure off Allen while also opening up the playbook for offensive coordinator Brian Daboll.

After trading Orlando Brown Jr away, the Ravens use this pick to shore up the interior of their offensive line to help complement their run-heavy offense. Lamar Jackson, JK Dobbins, and Gus Edwards will be cheers-ing on each other if this is the selection.

Fully expect this pick to be traded but it is almost impossible to predict. Here I have the Bucs getting their future at the tight end position. After winning the Superbowl you really have the luxury to go whichever direction you desire. The Bucs get Gronk’s replacement here.

Please make sure to follow me on Twitter at @therealtrevt as well as the podcast at @TheHateful8FF!