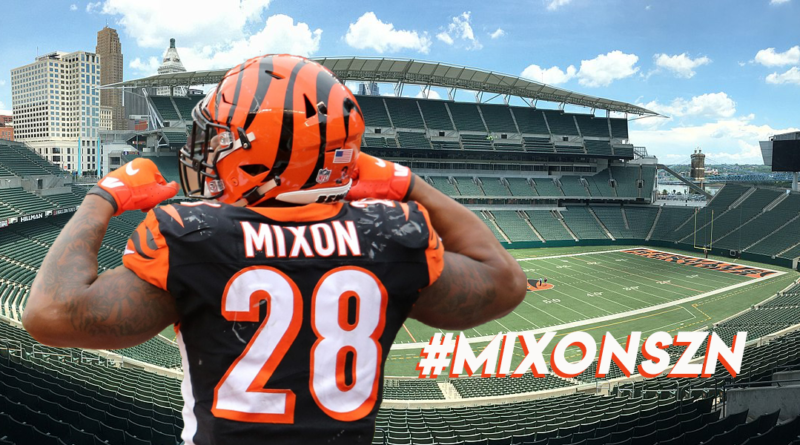 It’s Memorial Day Weekend and stores are painting their beginning of summer sales all over every paper, website, etc. Like any other season, it’s really the last chance to gear up on all of the items, accessories, or tools you may need and typically at a nice discount. I, personally, am in the market for a sturdy beach chair. In the fantasy world, I’m looking to acquire as many Joe Mixon shares as I can.

The 24-year-old, 4-year veteran, currently has an ADP of around 25 overall and RB14. That puts him at an early to mid 3rd round pick in most formats and would grade him as a high to mid RB2. It might help to first establish that ADP, or Average Draft Position, essentially sets the “market value” of a player. All it’s really good for is helping to frame what others will pay for a particular player. ADP is almost always wrong when it comes to the actual value, but that’s a separate conversation. In my opinion, Mixon is much more valuable than his current price tag and I suggest buying shares before the market catches up.

Before the start of the 2020 season, the Bengals gave Mixon a 4 year 48 million dollar contract extension. Head Coach and play-caller, Zac Taylor proceeded to give Mixon a whopping 81.5% opportunity share. That percentage was good for 2nd in the league behind Jacksonville’s James Robinson (85.2%) and just ahead of Tennessee’s Derrick Henry (78.5%). Before his Week 6 injury, Mixon was averaging 20 carries a game and in two of his final games received 6 and 8 targets, catching them all. Both the financial and on-field commitments to Mixon are enough to propel him into the “high floor” category of fantasy RBs alone.

One point that can be made about Mixon’s recent performances is that the efficiency was lacking. It left Mixon managers a bit frustrated at times and wanting more from the back that cost a 1st round pick in most formats. This can however be largely attributed to the implementation of a rookie QB into the offense and playing behind what is largely considered to be one of the worst offensive lines in the league. So what’s different? During the offseason, Cincinnati spent 3 draft picks on Offensive Line help, as well as adding a veteran RT to the team. Also, in a recent article, I took a look at the sophomore seasons of the top NFL QB’s and the numbers are more than encouraging. Second-year quarterbacks are better statistically in almost every single meaningful offensive category.

Another move that, on the surface, seemed like it would negatively impact Mixon’s potential production was the drafting of Ja’Marr Chase and the Bengals spending 1st round draft capital on a WR over Oregon OT Penei Sewell. The research however would suggest that the move may help Mixon. On average, adding a 1st round WR to a team will increase the RB1 output by about 10 points and will do so at about a 60% rate. This is vastly different than when Burrow made his Bengals debut. Before the season kicked off we could have expected the impact of a 1st round rookie QB having a -11 point impact on the team’s RB1.

We’re currently in the thick of the dynasty offseason, and that means that the rookie hype is at an all-time high. This is driving up the cost of Rookie Draft picks as well as the rookies themselves. Being injured for a significant portion of the year last season, Mixon is often forgotten when even mentioning players with RB1 potential. If this season is anything like, well, just about every NFL season in recent memory then veterans will start to rise to the top of ADP lists and be mentioned more often in training camps. Most teams will also deploy their veteran backs to start the season and fantasy managers will be scrambling to get themselves a reliable RB that they feel comfortable starting every week. So even if you aren’t the Mixon believer that I am, even after reading the indisputable reasoning above, you’ll almost definitely be able to move Mixon for more than you spent to acquire him.

Please follow me on Twitter at @FantasyAverage, and also make sure you are following the podcast handle @TheHateful8FF!