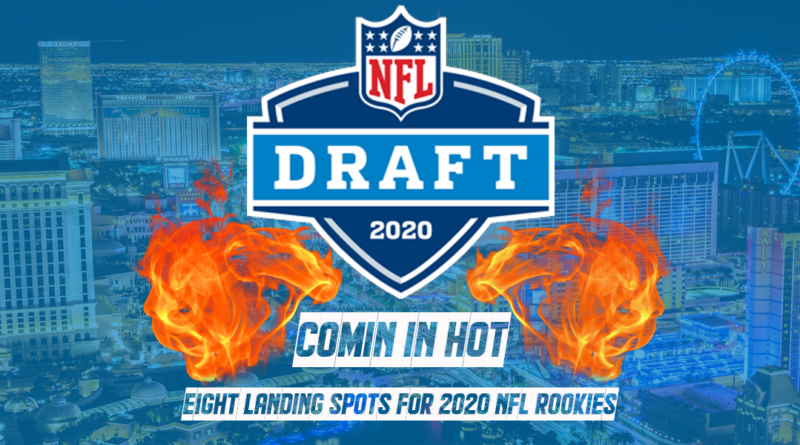 Now that the big wave of NFL free agency has passed, our focus is shifted to the draft. With the salary cap in place, the NFL draft is a great way for teams to round out their rosters with young talent at a low cost. It’s like plugging holes on a sinking ship, even the best teams in the league lose players via trades or free agency, the draft allows them to bring in players that they can mold for the next several years to fill any holes created from the departures. With that being said let’s look at eight incoming 2020 rookies and a team that may be a fit for them.

I’m sure this pick would come as a huge surprise to most people if the Cardinals called this one in. Let’s take a second and break this pick down. Kliff Kingsbury is known for his 4 wide receiver sets, in his first game against the Detroit Lions he ran 45 of them. In context, the rest of the NFL ran 36. Adding a piece like Ruggs would add that burner to this offense that would make them incredibly hard to stop. We also know the NFL is a copycat league and Ruggs definitely reminds us of a WR from the Superbowl champion Kansas City Chiefs.

You know things are bad for your team when your top wideout leaves you for the Carolina Panthers who are in the clear tank for Trevor (Lawrence) mode. I was, and still am, a big fan of Sam Darnold but the New York Jets have to start surrounding him with some reliable weapons. General Manager Joe Douglas has done a fantastic job in free agency addressing their abysmal offensive line, the draft would be a perfect time to add a piece like Lamb. We saw what DeAndre Hopkins did for the development of Deshaun Watson, Lamb could do the same with Darnold while building a young and lethal combo for years to come.

Still so weird saying Las Vegas Raiders, and it’s really too bad we won’t be able to see the draft spectacle that they would have put on for all of us this year to probably mock and marvel at. What isn’t weird is this pick, Jeudy is probably the most NFL ready wide receiver in this draft class. Jeudy and Lamb are 1a and 1b this year and if it wasn’t for all the other NFL wideouts on Alabama’s roster we would probably be looking at Jeudy like an Amari Cooper or Julio Jones. When Tyrell Williams is your number one you know your team has issues. Jeudy is the exact type of splash Vegas needs to come away from the draft with.

Being a Viking fan myself I can tell you in the Rick Speilman era he hasn’t had much success taking wide receivers in the first round. (See Patterson, Cordarrelle and Treadwell, Laquon) However, being an LSU Tiger fan I don’t think you can even compare Justin Jefferson to those other two. Jefferson would immediately come in and replace Stefon Diggs while easing the pain of that trade at the same time. I know you aren’t supposed to fall in love with a guy after a strong combine performance but Jefferson showed out on tape as well. In his final season at LSU, he amassed 111 receptions, 1,540 receiving yards, and a whopping 18 touchdowns. Adding Jefferson would give the Vikes a formidable 1-2 punch at WR and an eventual replacement for Adam Thielen down the road.

I just want to clarify that this is a prospect to team article and not a mock draft so don’t chew me out if you think I’m suggesting Tampa takes Clydro 14th overall. With that being said what we do know is Tom Brady loves, and I mean LOVES, throwing the ball to his running backs. Edwards- Helaire would fill that role of a James White, Dion Lewis, or Kevin Faulk as Brady’s security blankie out of the backfield.

Sometimes it’s fun to play pretend, and sometimes the rich get richer while we all grovel over how unfair it is that Andy Reid gets to add a new toy like D’Andre Swift to his offense. Swift is exactly the type of back that Andy Reid loves, he can play all 3 downs, running, catching, or blocking. All RB prospects are usually fairly raw coming out of college in the blocking department but Reid always finds a way to maximize their skill set to get the best return out of them. Adding Swift to a championship team that already features Travis Kelce, Tyreek Hill, and Patrick Mahomes would really be unfair, we might as well hand them the Lombardi trophy again this year.

Letting Melvin Gordon walk was a blessing in disguise for the Chargers. He needed way too much volume to produce borderline top-10 RB numbers. Having a guy like Austin Ekeler in the fold too would ease Jonathan Taylor in as well, while also giving the Chargers a dynamic duo in the backfield. Even if they only deploy Taylor as a two-down back he has way more of a home run factor than Gordon provided, and if Taylor isn’t able to break one the Chargers can then throw Ekeler at you who can easily take one to the house himself, either receiving or rushing. This is a match made in heaven in my eyes and would give the Los Angeles Chargers one of the best RB tandems in the NFL.

Now the other Los Angeles team and almost an identical situation. Cutting Todd Gurley not only freed up a top RB landing spot, but it also opened up about 225 touches. J.K. Dobbins is a fantastic back who isn’t getting as much attention as he should because of the strong 2020 NFL draft class. Dobbins like Jeudy is the most pro-ready back in this class and can be a three-down back from day one. While the Darrell Henderson hype training is barrelling through the offseason right now, adding a back like Dobbins would put a fairly firm halt to it. Not only would adding Dobbins be a great pick that would have fantasy footballers salivating but it would also help ease the burden on Jared Goff and get this Rams offense back on the right track.

Looking for some draft help? Make sure to check out AverageJoeNation.com and Pre-Order our 2020 Draft Loadout!