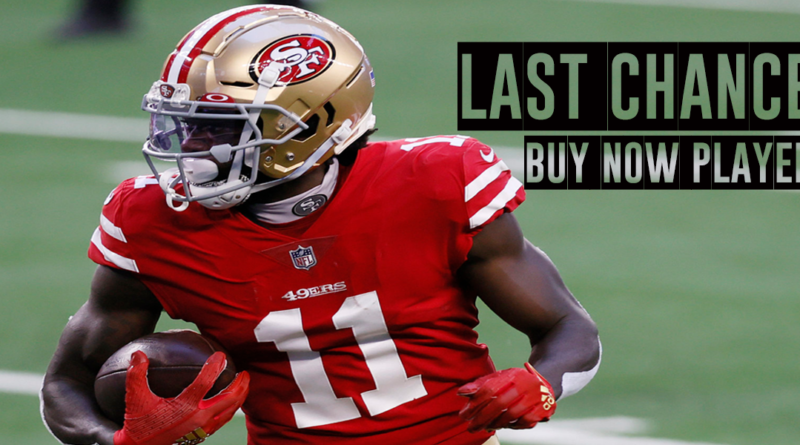 Have you ever found a new song, by a lesser-known artist, and sent it to a friend? Only to have that friend absolutely LOVE it? Then a few months later, said artist gains popularity, and the song becomes a “hit”? Finally, after quite some time, with a room full of your friends the song comes on and your friend says “Hey, I think you sent me this song”. Truthfully, it’s one of the best feelings in the world. It’s awesome to know that you were ahead of the game with anything. Think about it: music, stocks, bargains, even “life hacks”. You find it and you pass it along to all your friends like some sort of wizard of knowledge. Conversely, there aren’t many things worse than missing out on things and various trends. Especially after it’s been sent to you by a friend. Here is a list of players that I think are poised for a breakout, and you don’t want to miss out on what may be the last chance to acquire them.

The Former 1st round draft pick played 12 games for the 49ers last season, and despite battling injuries, playing with multiple QBs, transitioning to the NFL as a rookie, posted a very nice stat line. The 6’1 Arizona State product was San Francisco’s 2nd pick in the 1st round in 2020, which they acquired by trading DeForest Buckner. This was just one year removed from the team spending the 36th overall pick on WR Deebo Samuel in 2019.

Last year Aiyuk posted 1.9 fantasy points per target in PPR scoring. For comparison, both Dynasty WR2 (per ADP) AJ Brown and WR7 CeeDee Lamb posted a 1.92 fp/tar. Aiyuk is currently being drafted in startups as WR19.

The prospect of playing a full season with Jimmy G at QB, or worst case, #3 overall pick Trey Lance only increases the prospects of a true breakout from the 2nd year WR.

Lastly, according to the @BRotoFantasy (on Twitter) app, Brandon Aiyuk’s player comps are awesome. Aiyuk comps out to players like the aforementioned AJ Brown, Amri Cooper, Jeremy Maclin, and Justin Blackmon (who despite his off-the-field issues was a very good football player). The app is currently 100% free and provides incredible tools such as the Player Comps that I’ve just mentioned and more that I’ll be mentioning later.

The Bengals began the NFL Draft with a rather desperate need for Offensive Lineman, and then shocked a significant portion of the football world by drafting Ja’Marr Chase over Oregon OL Penei Sewell. Many suspected that this would crowd the WR room too significantly to draft either Tee Higgins or Tyler Boyd. I, however, suspect that Higgins is in a perfect situation.

Before tearing his ACL in the 10th game of the season, Joe Burrow was averaging 40 passing attempts per game. Factor in that statistically, the better rookie QB stats increase their 2nd season and pair it with the projected volume, there should be more than enough to go around for Higgins.

Higgins hauled in 67 passes and just under 1,000 yards with very subpar QB play for the last 6 games of the season (after Burrow went down) and made some highlight-reel plays along the way. Also, the return of Joe Mixon should pump up the rushing attack and ideally, increase the efficiency of the passing attack.

The Colts spent the 34th overall pick of the 2020 NFL Draft on USC WR Michael Pittman Jr. just 7 picks ahead of drafting the incredibly talented Jonathan Taylor in what was an overhaul of the Indy offensive attack under Frank Reich. Posting just 40 catches on the season and missing a few games on IR, Pittman underwhelmed fantasy owners that were expecting big numbers. However, not every rookie bursts onto the scene like Justin Jefferson, and sometimes our expectations are a little out of whack.

The Colts have since replaced QB Philip Rivers with former 2nd overall pick, Carson Wentz, reuniting him with Reich (his OC in Philadelphia). Many thought that this would be the best move for Wentz as many think that Reich’s system and coaching style is the main reason for his MVP caliber season. That same season, the Eagles won the SB with their leading WR being Alshon Jeffery, who stands 6’3 and weighs in at around 220 lbs. A strikingly similar build to Pittman’s 6’4, 220-pound frame. Pair the system to the new QB with a much stronger arm than the much older Rivers and Pittman is in line for a big 2nd year and beyond.

Another somewhat surprising statistic to back the projection of Pittman is, despite his big build, he’s able to make things happen after the catch. In fact, according to the @BRotoFantasy app’s YACOE (Yards After Catch Over Expected), Pittman ranks 3rd in YACOE/rec at 3.0 and 1st in YACOE%. For those that haven’t heard of these metrics, YACOE is how many yards a player gets vs how many he’s expected to get on any given play. So not only does Pittman exceed expectations at a higher rate than anybody else, he ranks 3rd in the number of yards he gets on those plays.

Harris is heading into his 3rd season in the NFL, all with the Patriots, who spent a 3rd round pick on him a few years back. Harris then missed the majority of his rookie campaign due to injury, only to follow that up with just 10 games in his 2nd year. However, in those 10 games, Harris was very productive. Harris averaged 5 yards per carry, and 0.71 RYOE/Att (Rushing Yards Over Expected per Attempt). For comparison, this was better than Derrick Henry, Jonathan Taylor, Cam Akers, and D’Andre Swift.

Having played only 10 games, Harris ran for 691 yards. That would be good for 1,105 rushing yards if he played a full 16. Obviously, that’s not exactly how statistics work. But it’s not exactly wrong either. This offseason the Patriots spent big on several TE’s and WR’s to bolster the passing attack. This should help ease the number of players that opposing defenses stacked against Harris.

In fact, according to NFL Next Gen stats Harris faced 8+ Defenders in the box at the 3rd highest rate in the NFL (39.42%). The combination of Harris’ elusiveness and the NE OL was able to put him near the top of the NFL’s YBC (Yards Before Contact) list.

The only issue I see for Harris is volume. If he gets it, he’ll be a top fantasy asset without a doubt.

The NY Jets spent a 4th round pick on North Carolina RB Michael Carter this past offseason. The Carter selection was overshadowed by his college teammate Javonte Williams going to Denver much earlier. Carter has a pretty clear path to take over the starting job in NY, alongside fellow rookies Zach Wilson and Elijah Moore, with really only veteran RB Tevin Coleman standing in his way.

Coleman, however, has only played in 22 out of the last 32 possible games and I don’t think it’s any secret that the 28-year-old is likely past his prime. Carter has the build of a versatile back, made to last. In fact, the @BRotoFantasy Comp tool has both Maurice Jones-Drew and James White (the ZeroRB darling).

This is likely one of the more controversial on this list, but considering Carter is the 4th or 5th back going in rookie drafts, the price is too cheap to miss out on the opportunity. Two straight 1,000 yard seasons to finish his collegiate career and 20+ catches to go along with it increases the prospect of Carter developing into a starting-caliber RB.

I want to give an extra shout-out to the Broto app (Download link: onelink. to/66yp96). The new tools and player comps are absolutely awesome and it’s completely free!.