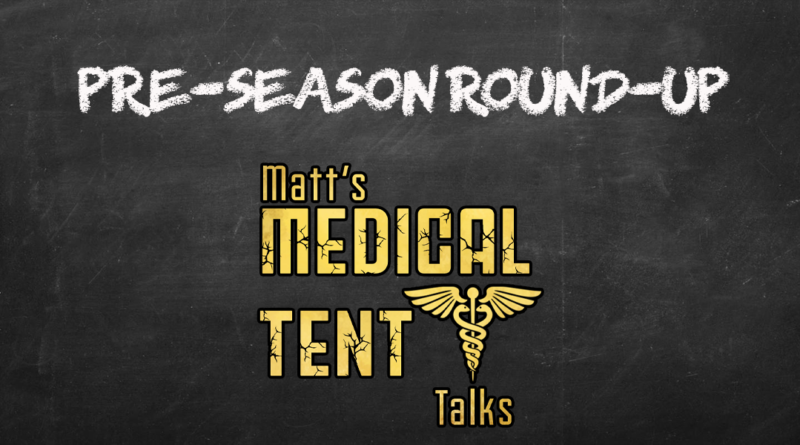 It’s…here…? Really? YES. Football, REAL FOOTBALL, is upon us! This year, to put it plainly has sucked, and I think I speak for most people with that sentiment. Hopefully you and your friends and family have been able to stay healthy through the trials and tribulations of 2020. Thankfully, we have reached a point where normalcy can return…kind of. Football is back and so is fantasy. Your drafts are over and it’s time for Week 1. But, are you ready for Week 1? Have you kept up on all the news out of training camps? If so, good for you! If not, I got you (from an injury perspective). I’ll break down all the major fantasy-relevant injuries from each team, to get you up to speed on who’s in and who’s out, going into this weekend of football. LET’S DO IT!

Last season’s MVP was listed with an undisclosed injury in late August. Thankfully Jackson has been back at practice and there are no worries heading into the season.

After slipping in practice and straining his groin on August 26th, Montgomery’s week one status is in doubt. The initial prognosis from the team was 2-4 weeks. Two weeks puts Monty on track for week one, though even if that is the case, I wouldn’t feel so great about slotting him into my lineup. Groin injuries, limit a player’s explosiveness and agility. Considering Montgomery didn’t do much last year when healthy, what would make us believe he can be effective when not 100%? Regardless, if not managed correctly, this can end up being a season-long headache, so, for me personally, I would feel much better if Montgomery were to miss the full four weeks prior to returning to the field as this would limit the future risk of injury.

Prognosis: Doubtful for week one, if he were to play, leave him on your bench

After 2019, A.J. was the last person anyone wanted to see get injured this preseason. Thankfully, the reported hamstring strain was seemingly minor with the Bengals being very cautious causing Green to miss some practice time. I view Green’s absence as more of a testament to good load management versus a serious injury requiring rest, I mean, we’re talking about PRACTICE. Jokes aside, I expect A.J. Green to be 100% heading into the season, which is what is also expected from his coach Zac Taylor in a presser on Monday. I see a big year for Green in 2020 as the all-pro receiver looks to become the number one target for the Bengals young star, Joe Burrow.

Prognosis: At or near 100% heading into week 1, though he’ll have a tough assignment week one against Casey Hayward and Chris Harris.

After core muscle surgery for an injury that hampered Beckham all of 2019, OBJ is 100% heading into 2020 and looking to make a mark in his second year in Cleveland. Despite multiple injuries over the last few years, none are really related and can be viewed as one-offs in a string of bad luck. Assuming Odell’s luck turns around this season, he should easily outperform his draft price.

Prognosis: No injury concerns heading into a tough week one matchup against Baltimore.

The true WR1 for the Browns (kind of kidding…kind of not?) also had surgery this offseason. Jarvis Landry had surgery in a similar area as OBJ, though Landry’s surgery addressed hip impingement and/or a labral tear at the hip joint which causes moderate to severe nagging pain. The timeline for this injury in elite athletes is typically around 10 weeks. Considering a February surgery, there was never any doubt in my mind that Jarvis would be good to go for week 1, though many had their concerns. Just a few days before the start of the season, reports from Cleveland say Landry is looking as healthy as ever and is not a concern for week one. Expect another 1000 yard season from Landry who has played all 16 games in each of his first six seasons in the NFL.

While his concussion history was the main source of discussion over the offseason, we learned recently that a quadriceps injury has been hampering Cooks throughout the preseason. It seems as though the Texans have been playing it safe with their recently minted speedster, which is a smart decision considering, again, we’re talking about PRACTICE (ok, I’m done with the A.I. quotes). Similarly to Montgomery’s groin injury, if not managed properly, a quad strain can become a nagging problem over the course of a season, making for a prudent decision to allow Cooks to fully heal before the start of the season. Reports say Cooks will be slowly ramped up to his full allotment of snaps which tells me he is still not fully healed. Practice reports should be monitored closely as Thursday night approaches.

Prognosis: Ramp up period should allow Cooks to be 100% by week 2-3 assuming no setback with a current quad strain. If you have another option, I’d consider it for week one, though Cooks should play.

See A.J. Green discussion above. I believe Hilton’s missed time was out of an abundance of caution for the Colts’ number one wideout, versus a serious hamstring strain. Hilton is at or near 100% heading into the season, but will it last as he has developed numerous soft tissue issues over the past two seasons.

Prognosis: Should be a full go for week one in what on paper seems to be a JUICY matchup against Jacksonville

After suffering what was reportedly a mild hamstring injury on August 23rd, news out of LA has been mostly hoping for a week one return, but, the news of the signing of former Bucs rookie Raymond Calais on Sunday may be the writing on the wall for Henderson’s week one prospects. With rookie Cam Akers listed as the starter for week one, a big game in primetime against the Cowboys on Sunday night could spell doom for Henderson’s hopes of having a significant role in this backfield.

Prognosis: Doubtful for week one

After landing hard on his shoulder for the world to see on Hard Knocks, Williams was diagnosed with an AC joint sprain. The good news is that the collarbone seems to be intact as Williams did not require surgery. What it comes down to at this point is Williams’ pain tolerance and range of motion in the shoulder. HC Anthony Lynn declared Williams as a game-time decision, but considering the shoulder will not be 100%, and one hit or fall could knock him out of the game, I would be very reluctant to play him in week one.

Prognosis: GTD, I would steer clear of Williams this week

The Giants’ veteran receiver suffered a hamstring strain late in the preseason and is not looking good for week one. Even a minor hamstring injury can cause a one to two-week absence, and just like the other soft tissue issues mentioned in this article, poor management can turn that 1-2 week injury into a season-long problem. I don’t expect the Giants to throw Tate out there in week one. It’s a long season.

Prognosis: Doubtful for week one, monitor practice reports in the weeks ahead to gain clarity on injury severity

The Eagles listed Miles Sanders with a “Lower Body Injury” in the middle of August, which was later reported to be a hamstring injury by Adam Caplan. News has been slowly dripping out of Philly regarding Sanders as the injuries pile up elsewhere on the team. Promising news for Sanders though, is that the Eagles kept only two other running backs on the active roster, those being Boston Scott, and Corey Clement, neither of which is suited for a three-down role, which tells us Miles Sanders should be a full go for week one. Let’s just hope the injury madness in Philly comes to an end sooner rather than later.

Prognosis: Evidenced by team transactions, Sanders should be a full go to start the season with no injury limitations

Rookie Jalen Reagor is suffering from a torn labrum after trying to make a tackle on an interception during a scrimmage…COME ON. Reports say it is only a “slight tear”, but a tear is a tear. This will likely impact Reagor throughout the season, and probably necessitate surgery at some point. Assuming Reagor can deal with the pain and demonstrate the ability to move his shoulder to make all types of catches. Reagor should be back sooner rather than later, evidenced by the Eagles not placing their first-round pick on the IR.

Prognosis: Expect Reagor to miss at least the first two games with the potential for a week three return on a pitch count

The oft-injured Eagles’ receiver is continuing to work his way back from Lisfranc surgery on his foot. The timeline for this sort of injury is typically around 11 months. Jeffery’s surgery was in December, so he likely has a ways to go before we see him on the field, though he did manage to avoid the PUP which tells us that we should see him no later than week 6. Despite the positive news of avoiding the PUP list, players after this type of injury demonstrate a significant decline in performance after surgery. Considering Jeffery’s already deteriorating skills, I don’t see much upside here, though I’m sure Wentz will look for him around the endzone.

Prognosis: Likely a multi-week absence to start the season, and not sure what the Eagles will get upon his return. If you don’t have an IR slot, he’s not worthy of a bench spot at this point.

Deebo suffered a Jones fracture and mid-June required surgery. This injury has significant risks for malunion (improper healing) which would necessitate a second surgery. The reported timeline is 12-16 weeks suggested Deebo would have a shot at week one, with recent practice reports glowing with praise regarding how well Deebo looks. This is great news, as I was personally skeptical of the timeline as poor management can lead to a second surgery. Deebo currently seems to be a game-time decision for the Niners week one matchup against the Cardinals. IF he plays, I expect the Niners to follow a similar blueprint as the Ravens did with Hollywood Brown in 2019 to begin the season. So, don’t expect a full allotment of snaps in week one and for a few weeks into the season.

Prognosis: GTD for week one, will likely be on a snap count for the first few weeks of the season for load management on the foot 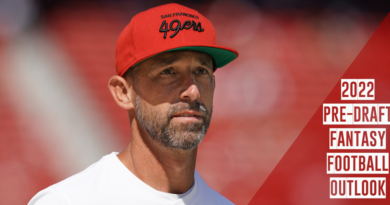