Ahhh, a light week for injuries! …Unless you have one of three studs I’ll be naming later. But, generally, it’s nice to see things calming down a bit on an injury front. What is not calming down, unfortunately, is COVID infections nationwide as well as the NFL (If you’ve had it with COVID talk, please feel free to skip this next bit). Due to recent extremes in positivity rates in Wisconsin, the Green Bay Packers have had to nix plans to allow fans into Lambeau. Additionally, as of this writing, Stephon Gilmore, and another two Titans players have tested positive, putting all of week 5 in jeopardy as the NFL begins to run out of room to reschedule. I’m not trying to be political, because this issue isn’t political. Wear a damn mask. If not for your sake, then for your family’s sake, or your friends’ sake, or even for football’s sake. Just do it. It’s REALLY not that hard. And now, back to your regularly scheduled programming!

Don’t forget to watch my companion podcast LIVE each week after Thursday Night Football on Twitter at @DocMiragz!

The classic quarterback mechanism of injury. A player gets wrapped up and slammed into the turf on his shoulder. This was the mechanism for Sam Darnold, and, unfortunately, it was his throwing shoulder. Darnold underwent x-rays during the game last Thursday which was evidently negative as he returned to the game, though he was quickly ruled out for the Jets’ week five matchup against Arizona which brings into question if he should have been allowed to return to the game at all, but…it’s the Jets. Based on reports from Adam Gase reporting Darnold is having trouble lifting his arm, this points to a likely AC joint sprain. Depending on the severity, Darnold can miss anywhere from a week to over a month. With him quickly being ruled out for week five, this is likely a more serious sprain, so I’d put him closer to the one-month timeline.

Prognosis: 2-6 weeks depending on severity

Here’s where I begin to talk about the studs I mentioned in the intro. After getting rolled up on early in week four, we learned that Nick Chubb had suffered an MCL injury in his knee. Reports suggest this being a multi-week injury, suggesting, in addition to the pain, obviously, there is also some laxity in the ligament demonstrating a moderate to severe sprain (which is actually a slight tear to the ligament). Thankfully the MCL has a good blood supply which allows for quicker healing than some other ligaments in the knee which is why in some cases, players can return in less than a week (a la Chris Carson). If this is no more than a grade II sprain, Chubb can potentially push that timeline to three weeks. Thankfully for the Browns, they have another stud in Kareem Hunt to shoulder the load until Chubb returns.

The second of the stud running backs to be injured in week four, Austin Ekeler is dealing with what is reportedly a relatively severe hamstring strain, which is obviously not good as he was barely able to get off the field and onto a cart. One small piece of good news is, after rewatching the injury video, Ekeler grabs for the middle of his leg after the play, so right in the middle of the hamstring muscles. An injury towards the middle of the hamstring muscle belly has a two to three week faster recovery time compared to a proximal injury (towards where the muscle attaches up near the butt) with less of a chance of re-injury. So while this is still a bad injury, it’s seemingly not as bad as it could have been…though still bad! That being said, Ekeler also said on his personal Twitch stream that some of his tendon “ripped off the bone”, so not entirely sure what to make out of this situation. We will need clarity regarding the true nature of the injury, but for now, based on the video, the initial timetable seems accurate.

Julio becomes the second player to be featured on this article twice this year, joining Will Fuller V….not great company. After apparently coming into the season with a slight tweak in his hammy, Jones tweaked it further in week two and again tweaked it in week four. Julio is obviously not allowing for appropriate rest, leading to being limited each and every week thus far, which is seen in his pedestrian (for Julio) statistical output to this point in the season. Julio needs extended time off to allow this injury to fully heal. I fully expect him out for week 5, and likely week 6. Will that be enough time to heal up to 100%, maybe, assuming he hasn’t done further damage.

Another TNF injury, Fant suffered what is being reported as a mild high ankle sprain. I’ve gone over this multiple times this season, high ankle sprains are no joke. Even a “mild” sprain can cause a player to miss four to six weeks. Will Fant be another case of returning too early and being ineffective until he reaches his full healing timeline? Probably. I wouldn’t expect Fant to be back to himself until around week 10. The Broncos have a bye in week eight, but I doubt he misses that much time, even though he likely will not be 100%.

Not much to discuss here. Chicago has no one of fantasy note on the injury report, and as for Tampa Bay, we already know most of who will and will not be playing. Godwin, McCoy, Watson are all OUT, and Fournette is doubtful. The main questions are Mike Evans and Scotty Miller. Evans played throughout most of week four with an ankle sprain and somehow played pretty well. He has been unable to practice at all leading up to TNF. I think there is a decent chance he is active, but acts more as a decoy, and probably ends up catching another one-yard touchdown. If he’s active, you probably have to play him considering there’s not much else, oh yea, OJ Howard is also out with a torn Achilles. As for Miller, he was at least able to log a limited practice on Wednesday which has him trending upward for the game. Assuming no setbacks in pre-game warmups, I expect Scotty to play, as he played last week while dealing with the same injury. 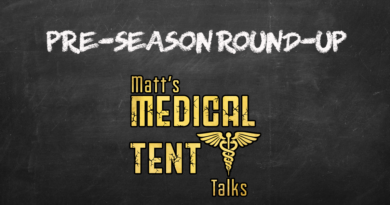 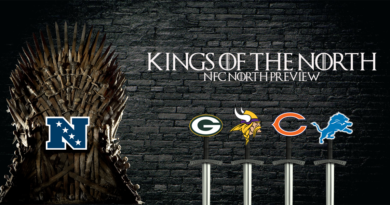 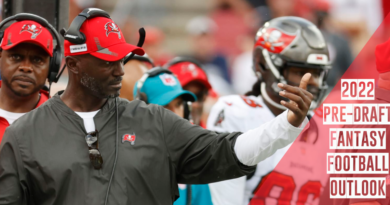