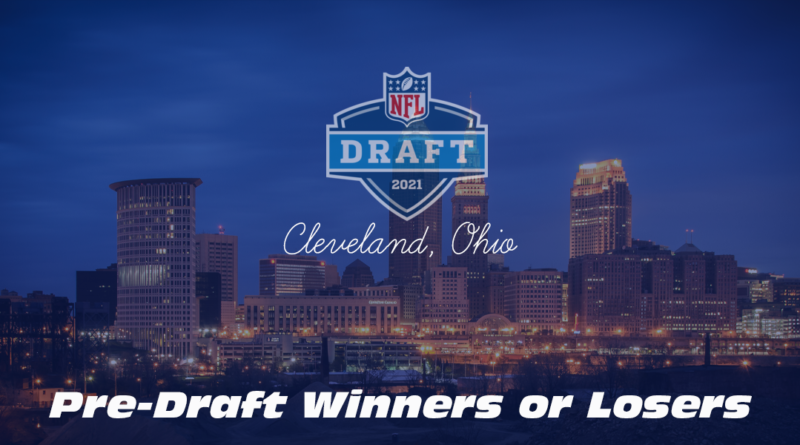 The NFL draft is almost upon us, so all we can do right now is dream about what may or may not happen. The following are the positives and negatives to what could happen in the first two rounds of the NFL draft and what that will do to the same position players on that team.

We all know that the Niners are drafting a QB, the real question is who is it going to be? The best scenario possible for Jimmy G is that they draft Trey Lance, as it is believed he is the one quarterback that will need time to develop as a rookie. If they draft Wilson, Fields, or Jones it is more likely that Jimmy will be competing for his job on day 1. Jimmy is a mid-tier QB2 at best as long as he keeps the starting job.

Lock has shown flashes of ability but he has not been consistent enough to think that his starting job is secure. The Broncos are one of two teams in the top 15 that I believe will move up if they can for a quarterback. If they don’t draft a QB then Lock should be considered nothing more than a low-end QB2. If they do draft a Quarterback then there is a chance that Lock is not the starting quarterback come this season.

The New England Patriots are the other team in the top 15 that I believe could move up to draft their future QB. Cam Newton is no longer the elite quarterback of the past. His upside is limited and his floor is decently low. He is a mid-tier QB2 if they do not draft a QB/ or draft a QB that needs a year to win the job. If they draft Justin Fields/ Mac Jones, I believe his days will be numbered as the starter of the Patriots.

Gordon is in a prime situation to succeed in 2021. It is not likely that the Broncos are drafting a running back in the 1st round, but there is a chance that they could draft one in the second round if the right running back is there. I would not be worried about any of the running backs outside of the top 3, as I believe that Gordon could compete with anyone not named Harris, Etienne, and Williams. If the Broncos do not draft a running back in the first two rounds, then Gordon’s fantasy value should be safe for 2021. Gordon should be a mid-tier RB2 if he is the lead back this season for the Broncos.

If you have been looking at the mock drafts thus far, it looks like the Bills will not be drafting a running back in the first round of this year’s draft. That does not mean that it won’t happen though, as we have seen wild things happen in the NFL draft before. If they do draft a running back in the first round, it will almost certainly be one of the top three prospects at the position. If the Bills do not draft one of the top three prospects it does not necessarily mean that either of the Bills running backs is primed for a great season. Moss will deal with mainly rushing, which leaves Singletary as a 3rd down option. They both cap each other’s upside. They remain low-end flex options unless one of them takes a leap forward in 2021.

Whether you are a Jets fan or not you are definitely hoping they draft a running back early this year. The Jets are rebuilding but that does not mean they don’t offer upside for their fantasy starters. If one of the top three running backs makes it to their second-round pick, I could see the Jets taking a running back there. If they don’t then it doesn’t really matter as we are not going to be relying on Coleman or Perine as weekly starters in 2021. They would most likely be a desperation flex or bye week fill-in unless one gets injured or takes control of the backfield.

The Falcons shouldn’t be using their first-round pick on a running back, but I wouldn’t count them out of using their second-round pick. They don’t have much depth behind Davis. If a top candidate is there at the beginning of the second round I believe they will consider taking a running back. If they do not draft a running back early, then Davis should be a low-end RB2 in 2021.

The Cincinnati Bengals need a third wide receiver after losing AJ Green in free agency. The main threat to Higgins and Boyd is if the Bengals draft Ja’marr Chase. This would require them to use their 5th overall pick, which most people believe they will be picking an offensive lineman. If they do end up drafting Chase, then Higgins and Boyd’s value takes a decent hit. They would be WR3’s with capped upside. If the Bengals decide to go with an offensive lineman instead, Higgins and Boyd are both low-end WR2’s with upside.

The Colts receiving group is pretty thin behind their veteran T.Y. Hilton, Pittman, and Campbell. The Colts have a definite need at wide receiver, especially after this year. If they were to use a 1st round pick on a receiver it would almost certainly hurt the upside of Pittman and Campbell going forward. If they didn’t then both Pittman and Campbell are flex values with upside depending on if one or both improve this upcoming season.

The Jaguars are another team who have been associated with the wide receiver position in the early rounds of this year’s draft. It is known that there are a bunch of slot receivers in this year’s draft. If the Jaguars were to use an early pick on a slot receiver then that would hurt Shenaults value in 2021. It would give them a crowded receiving group which would leave every wide receiver upside ultimately capped. If they decide to bypass the wide receiver, then Shenault and Chark would be weekly flex options with upside in the Jaguar’s up-and-coming offense in 2021.

These three tight ends can all be grouped together and called “ Kyle Pitts took my job crew”. Kyle Pitts is one of the most athletic and talented tight ends to have come out in a long time. His upside is immense and he can be said to be one of the safest picks in this year’s draft. He should definitely be drafted within the top 12 picks of this year’s draft. Whatever team drafts him will have him starting day one, which means their starting tight ends value will almost be nonexistent. For those lucky tight ends who still have their starting job, they should remain high-end TE2’s with upside in 2021.

Please make sure to follow me on Twitter at @JGalt93 as well as the podcast handle at @TheHateful8FF!