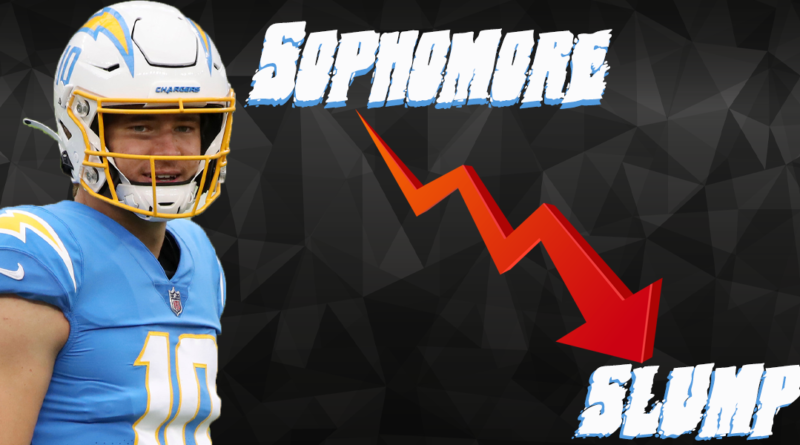 POV: the first day of Freshman year of High School. Your favorite fantasy football analyst stands at a towering 4 feet 10 inches tall, Jansport school bag (with the straps choking my armpits, of course), “powder blue” rubber bands around my braces to match my school colors, and eager to embark on the adventure that is High School. My entire life in front of me, a ball of limitless potential.

One year later: Your favorite fantasy football analyst stands at a meager 4 feet 11 inches (I was a late bloomer), bleach stains on my uniform shirt collar, armed with a single pencil, a single pen, and encased in a seemingly never-ending purgatory. This is called a “Sophomore Slump”.

What happens to language over time is, we forget the origin and sometimes even the meaning of the very phrase, or saying, that we’re speaking. We commonly apply the term “Sophomore Slump” to the sports world. We compare the high expectations of a promising rookie to average 2nd-year performance and attribute a “Sophomore Slump” label to the season. We do this so much that it’s almost factored into our projections and expectations. I recently responded to a Justin Herbert tweet stating that I would feel more comfortable with a viable backup to Herbert, even though I have him ranked in my Top 5-6 QBs, due to the potential “Sophomore Slump”.

I dug into some of the top rookie seasons (based on per game) and then took a look at their follow-up years to see if there were any trends. What I can say pretty confidently is, “There is no such thing as a ‘Sophomore Slump’ for QBs in the NFL”, not statistically anyway. I’ll break it down in a table below, but based on the averages of the qualifying QBs, just about every meaningful stat is better in the 2nd year averages as opposed to the Rookie QBs:

Now you may be asking, “Well can’t 1 or 2 good/bad seasons throw off the entire average?” Yes, these numbers are compiled using 15 different QBs, so 1 or 2 really won’t move the meter too much. For the most part, the QB’s that had stellar seasons followed it up with something similar. Jameis Winstons for example had 2 consecutive 4,000+ yard passing seasons. Kyler Murray had 2 consecutive seasons with exactly 12 interceptions.

Given what I know now, the Justin Herbert’s and Joe Burrow’s of the world should be every bit of what they were last season, with the addition of a few sacks. Okay, maybe worry about Burrow, but Herbert is a Top 5 dynasty QB in my eyes.

For more analysis or just wanting to keep up with me on social media, you can follow me on Twitter at @FantasyAverage. Also, make sure you are following the podcast handle at @TheHateful8FF!