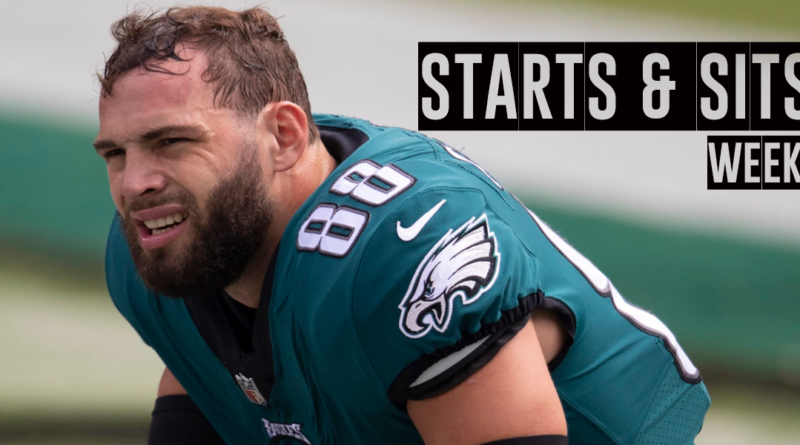 Football is back! Week 1 is upon us, so of course, we need to know who to start and who to sit. Our start/sit article is not going to discuss the obvious players who should always be played. We examine matchups and usage from week to week, which should give you the best chance at winning your weekly matchup. Good luck this week and don’t forget to not overthink it. Here are the Starts/ Sits for Week 1:

I know you might be hesitant to start a rookie in their first game in the NFL, Lawrence shouldn’t be in that category of rookies though. He was the first pick for a reason, and he has enough talent around him to be able to succeed. He also will be facing one of the worst teams in the NFL this year which should only help his chances of putting up good numbers this week. Lawrence is a high-end QB2 with QB1 upside.

Baker is not always consistent but that doesn’t mean he can’t be a stable streaming option depending on the matchups. If you look at last year’s games Baker did pretty well against the Kansas City Chiefs from a fantasy perspective. The Browns should be down for most of this game, so I like the chances of Baker utilizing his arm to try and succeed. Baker is a low-end QB2 with decent upside if things play out how they should.

Revenge game anyone? The NFL is great at putting together matchups that create storylines. The fact that they set up Darnold to play his old team in the first game of the NFL season is pure gold. Darnold has the best talent he has ever had while playing in the NFL and he also has a great HC and OC. If you are streaming the position and just want some pure fire upside, I would use Darnold this week against the Jets. He is a low end QB2 with good upside against a familiar foe.

Carr is underrated. He always finishes ahead of where he is drafted and is a viable streamer depending on the matchup. This is not one of those matchups. The Baltimore Ravens defense should once again be one of the top defenses, which makes me hesitant to start Carr against them. Carr is a QB3 in week 1 with limited upside.

Tua is an enticing late-round QB in 2021 but this week’s matchup isn’t the one I would like to roll him out in. The Patriots defense is as solid as they come and should present a challenge for the 2nd year QB. Tua is a QB3 with minimal upside in week 1.

Jones has the best offense that he has ever had in 2021, that does not mean he is a streamable option every week. Like most QB’s outside the top 12, it is the matchup that makes them a potential starting option. This week’s matchup against the Broncos is not one of those matchups. The Broncos should be much better this year and should be able to get by the offensive line and reach Jones pretty regularly. Jones should be on your bench/ waiver wire in week 1.

Everyone was done with Robinson once the Jags took Etienne in this year’s draft, and for good reason. Unfortunately, Etienne is out for the season, which leaves Robinson as the lead back for the Jags. With only Carlos Hyde behind him, I am high on Robinson this season. The Houston Texans defense is full of holes, which means Robinson should be able to feast on Sunday. Robinson is a high-end RB2 with RB1 upside.

I have an inclination that as long as Mostert stays healthy this year he is going to be a great mid-round value for those that rostered them. This week he faces one of the worst defenses in the league. Mostert is an auto-start for me this week in which this should be a game where we see the 49ers in the lead for most of the game. He will get the start and has a great presence in the passing game as well as the rushing game. Mostert is a low-end RB2 with a game-winning upside in week 1.

Everyone is fading Gordon for the newer addition of Javonte Williams. Williams is certainly the future, but the Broncos are going to lean on Gordon at least for the beginning of the season. This is his last year on the contract so it wouldn’t make sense not to get the most out of him before he is gone next year. Gordon is a Flex option with upside in what should be a good matchup against the Giants.

Jacobs’s value tanked after the Raiders added Kenyan Drake this past offseason. Not only will his passing work be limited he also has one of the toughest schedules to start the season. If you have any other option with a higher ceiling I would play them over Jacobs in week 1. He is a flex option with a low ceiling against the Ravens.

Everyone was excited for Michael Carter this offseason but he is currently listed as the RB3 for the Jets. Tevin Coleman has the lead with Ty Johnson which means this is a running back mess that I am avoiding. Until one of them separates themselves from the pack this backfield is totally unclear. If you need to flip a coin on one of them I am landing on Ty Johnson. Start any of them at your own risk.

Very similar to the Jets this backfield doesn’t necessarily offer a lot of upsides currently. There is value to be had but it is anyone’s guess as to which back you should play on any given week. It also makes it very difficult to project because Josh Allen is technically the lead running back for the Bills. I would avoid starting either this week anyways as the Steelers defense will give the whole team a difficult time on Sunday.

Brown showed that he still had some gas left in the tank last season and he should perform similarly this season as well. Tom Brady and the Bucs haven’t lost a step and now they face a Dallas Cowboys defense that is sub-par. Put Brown in your lineup and enjoy the pure upside that he can deliver on any given play. Brown is a high-end flex with WR2 upside.

Robby is going to have some revenge fun too. It is the New York Jets Vs. the former New York Jets. Robby has proven that he is a great receiver no matter where he is. He produced with Darnold in New York and he will produce with him on the Panthers as well. Robby is a low-end WR2 with good upside in week 1.

Pittman was one of my offseason sleepers due to his low ADP and the acquisition of Carson Wentz. With T.Y. Hilton being out for three weeks at least, Pittman is guaranteed to be the WR1 for the Colts. The matchup against the Seahawks is not one that you should fear either. Pittman is a solid flex with upside in week 1.

Not only is Kenny on a new team with a lesser quarterback, but he is also coming off of yet another injury. We all know that Kenny has the ability to succeed, but that does not mean he is necessarily going to be in the Giants organization. Kenny is a high-end flex with limited upside.

Chase hasn’t looked as good as most would have expected. I am not worried about his long-term ability, but for the moment I am benching him wherever I have him. Although the matchup against the Vikings is decent,  I expect Chase to have some rust to shake off this season. Chase is a boom/bust type of play in week one.

We all thought Goedert would be the main TE in Philly but that is not the case right now. Ertz is still hanging around and it doesn’t look like he will be going anywhere. That doesn’t mean Goedert can’t have upside on any given week. I like the chances of this game being a high-scoring game. Somebody has to catch the passes so why not the 6’6 tight end. You drafted Goedert to be your starter, put him in your lineup with confidence against the Falcons this week.

Higbee is two years removed from when he had that great end to his season which made him a value in this year’s drafts. The Rams no longer have Gerald Everett which means Higbee no longer has to look over his shoulder. Higbee should be the 3rd-4th passing option in which should be one of the best offenses in the league. Higbee is a high-end TE2 with TE1 upside.

It is amazing that after all these years Gronk is still relevant, but he is. He relies upon touchdowns these days and that is perfectly fine because most tight ends do. The Bucs play the Cowboys this week in what should be a shootout. If I had to bet on a week that Gronk gets in the endzone, it is this week. Gronk is a high-end TE2 with an upside in week 1.

Gesicki has been decent as a starting tight end but his production has been unreliable at times especially from a fantasy perspective. The Patriots usually defend the tight end position pretty well, which caps his potential in the matchup. Gesicki is a high-end TE2 with limited upside.

Hunter Henry landing in New England broke a lot of hearts I am sure. A year where two top TE prospects land on the same team is something fantasy managers never want to happen and it is exactly what did. This does not mean that Henry can’t succeed in New England but it definitely makes it more difficult than if he was the TE1 on his team. Henry is also coming back from an injury, so I would wait and see how they plan on using him before putting him in my starting lineup.

Trautman has all the upside in the world but injuries and a lack of targets kept him from being able to see in the preseason. I personally still believe in Trautman and he has all the upside in the world at the tight end position. Until we are able to see what he is able to do in a regular-season game, I am keeping him on my bench. I would recommend having a wait-and-see approach for Trautman.