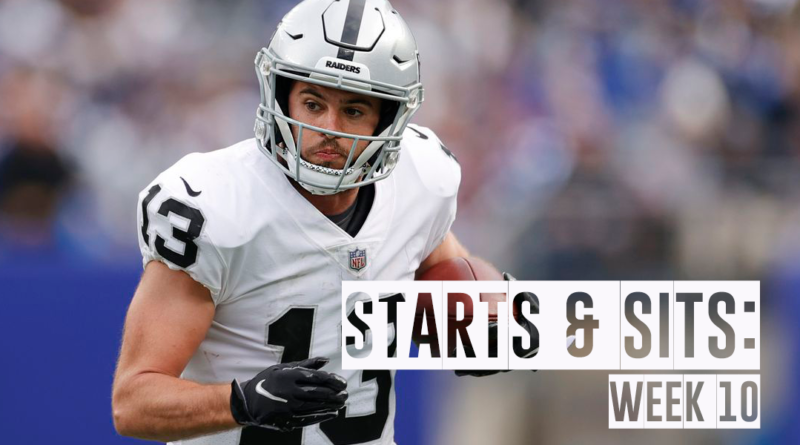 Week 10 is here, so we need to know who to start and who to sit. Our start/sit article is not going to discuss the obvious players who should always be played. We examine matchups and usage from week to week, which should give you the best chance at winning your weekly matchup. Good luck this week and don’t forget to not overthink it. Here are the Starts/ Sits for Week 10:

Wentz has been great over the last couple of weeks. I was hesitant at first as we have seen Wentz have hot and cold moments at times but I am confident in his ability, especially this week against the Jaguars. Wentz is surrounded by talent and should have a great day against a weak Jags defense. Wentz is a high-end QB2 with an upside in week 10. He offers a safe floor and great ceiling in week 10.

Carr hasn’t been as consistent as most would have hoped so far this season, but he does continue to have streaming-worthy upside depending on the matchup. Carr has played well against the Kansas City Chiefs in recent matchups and that shouldn’t change this week as the Chiefs have one of the lowest-ranked defenses in the league. If you are in need of a streaming option in week 10 you could do a lot worse than Carr. Carr is a high-end QB2 in week 10.

Siemian just isn’t the solution for the Saints. He offers very little upside even though he is in a good offense where he could very well succeed with the talent around him. The Saints will be without their leading running back Alvin Kamara this week which also takes away from whatever upside the offense had. If you are in need of a streaming option in week 10 I would look elsewhere. Siemian is a low-end QB2 in week 10.

There have been times that I was excited about starting Mayfield last year, but it has been hard to be excited about starting him in 2021. This week he faces a tough Patriots defense and will most likely be without his lead running back, Nick Chubb. If I were looking for a streaming option, I would aim for someone with a higher floor/ ceiling and a better matchup than Mayfield has this week. Mayfield is a low-end QB2 with little upside in week 10.

Walker is in a tough spot because he was never really wanted as the lead quarterback for the Panthers. This is most likely his last week as the starting quarterback anyways as the Panthers just signed Cam Newton. If I were to guess, I would think that the Panthers would lean on the run game for as long as they can this week against the Cardinals. The matchup is also not sublime as the Cardinals have been a solid defense for most of this season. I would look for a quarterback that offers a higher floor and ceiling than Walker this week. Walker is a low-end QB2 in week 10.

This is most likely the last week that Williams will be the lead back for the Chiefs as Clyde Edwards- Helaire should be returning from injury next week. That being said, Williams is a great play this week against the Las Vegas Raiders. He offers a solid floor and plenty of upsides as he should be utilized in the run and pass game. This matchup has the ability to be the highest-scoring matchup of the week. I would start Williams with confidence in week 10. He is a mid-tier RB2 with upside.

Even with Zach Moss clearing concussion protocol, I am still optimistic about Devin’s production this week against the Jets. If Moss plays I feel that his workload could be limited which should give more opportunities to Singletary this week. Singletary is a low-end RB2 with an upside in week 10.

Howard is the lead back for the Philadelphia Eagles for at least one more week. His carries have been consistent since Miles Sanders went down with an injury and he has been able to rack up solid yards. If you are in need of a flex play with a safe floor, Howard would be my selection this week. Howard is a high-end flex with upside in week 10.

The situation with Gibson has been disappointing for those who roster him in fantasy. He has shown glimpses of what he is capable of but has been hindered by injuries throughout the year. This should be the healthiest that we see him since he was on bye this past week, but it doesn’t mean that he is remotely healthy. Gibson is still dealing with a shin injury that has been nagging him for weeks now. That coupled with the fact that the Bucs are one of the top defenses against the run makes me hesitant to play Gibson this week. Gibson is a low-end RB2 with an extremely low floor and very little upside in week 10.

Peterson got into the endzone last week which ultimately saved his fantasy day. He might not be as fortunate this week against a tough New Orleans defense. There is also the issue that the Titans are looking like they are going to be a three-headed monster at the running back position going forward. I understand if you need to start Peterson, if you are able to play someone with a higher ceiling I would.

It is hard to trust Hines. He had an amazing game last week but if you look at most of his other games, he has been a complete bust. I would be fine with having Hines on your bench this week as he has not shown any type of consistency in 2021. Hines is a flex play with an extremely low floor in week 10.

There are two players that you can trust on the Raiders. One is Darren Waller and the other is Hunter Renfrow. Renfrow has been a breath of fresh air for the Raiders, his success should continue throughout the ceiling as he is one of Derek Carr’s most trusted targets. Renfrow is a safe play this week against Kansas City, he offers even more value in full PPR leagues as well. Renfrow is a high-end flex with WR2 upside in week 10.

Talk about the last man standing. The Cardinals are dealing with a ton of injuries on the offensive side of the ball. There is a chance that Kyler Murray and DeAndre Hopkins are going to be out this week. If Kyler plays it will increase Kirk’s value this week. Regardless Kirk offers a solid floor as one of the two main passing options left. Kirk should offer a safe floor and decent enough upside this week against the Panthers. Kirk is a high-end flex/ WR3 with upside in week 10.

Aiyuk looks to have been let out of the dog house and should continue to see success. This week’s matchup against the Rams is not ideal but I expect that it will be a high-scoring affair. Aiyuk should once again be a viable starter in week 10. Aiyuk is high-end flex with upside in week 10.

Moore has been a disappointment the last couple of weeks and it could be due to the QB play but it’s not like that has gotten any better lately. This week the Panthers will be led by P.J.Walker, so there is no real clarity as to how well Moore is going to do this week. He offers a somewhat safe floor and very little upside, especially against a tough Cardinals defense. Moore is a low-end WR2 with limited upside in week 10.

Landry should be the lead wide receiver in Cleveland now that OBJ is gone but that doesn’t mean that he will be putting up WR1 numbers going forward. Landry has always been known as a PPR guy but even while receiving a decent target share, he has not been able to have solid production so far this year. The Patriots are known to shut down an offense’s top option, so there is a chance that they choose Landry this week. Landry is a flex option with a low ceiling in week 10.

Moore had a great game last week but there is some hesitancy to play him on a weekly basis. The Jets also have a tough matchup against the Buffalo Bills this week which should limit most of the Jets offensive units this week. Moore is most likely a boom/bust play going forward until we see him produce on a regular basis.

Pat has been awesome since taking over as the lead tight end for the Steelers. He has been receiving at least 6 targets and has great red zone prowess. The Steelers are going to be without Chase Claypool this week which only helps Pat’s chances at succeeding once again. Start Pat with confidence this week against the Detroit Lions. He is a low-end TE1 with an upside.

Arnold has been great over the last three weeks and that shouldn’t change this week against the Colts. Arnold has become one of Trevor Lawrence’s most trusted targets and has been receiving a great target share. If you are looking for a safe play with touchdown upside, Arnold is a great choice at the tight end position in week 10. Arnold is a high-end TE2 with upside this week.

Cook is one of three tight ends that were targeted by Justin Herbert last week but he was the only one not to score a touchdown. Now while Cook still had a decent stat line this past week he does not offer consistency in fantasy football. The fact is that Cook’s floor is low and his ceiling is not exceptionally high. I would look for someone that offers a higher upside at both this week. Cook is a mid-tier TE2 with a limited ceiling.

Henry has been very hit or misses lately for the Patriots. That combined with the fact that the Browns defense has been solid, I would avoid playing Henry this week unless you don’t have a player with a safer floor and ceiling. This matchup has the possibility of being a very low-scoring affair, which leaves me hesitant to play most players involved. Henry is a mid-tier TE2 with limited upside.

Mo has shown that he isn’t being utilized enough to be trusted on a weekly basis. Especially if he doesn’t receive a touchdown. The matchup is good this week against the Jaguars, but that doesn’t mean he is automatically an auto-start. The Colts run game should be getting plenty of work this week against a weak Jags defense. If Mo doesn’t receive a touchdown early I would be concerned that he will leave those who started him very disappointed. Mo is a low-end TE2 in week 10.