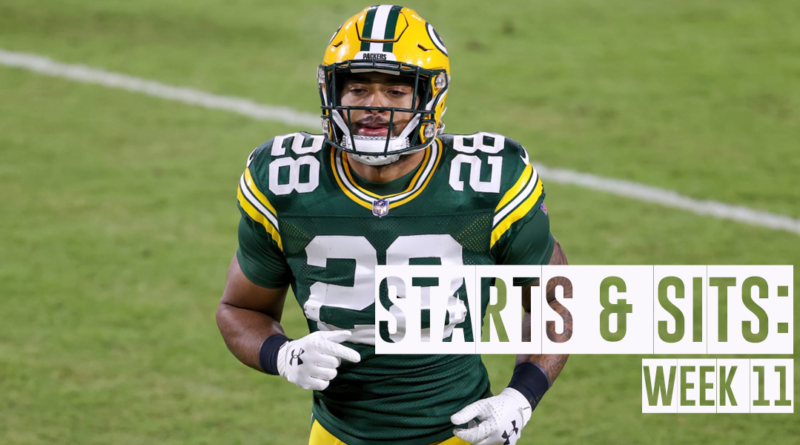 Week 11 is here, so we need to know who to start and who to sit. Our start/sit article is not going to discuss the obvious players who should always be played. We examine matchups and usage from week to week, which should give you the best chance at winning your weekly matchup. Good luck this week and don’t forget to not overthink it. Here are the Starts/ Sits for Week 11:

Tannehill hasn’t been as good as he had been the past two seasons but he is still a viable streaming option depending on the matchup. The Titans are no longer the run-heavy team that they once were due to Henry being out. Because of this, the Titans will have to rely upon Tannehill and the passing game to succeed going forward. Tannehill is a high-end QB2 with upside this week against the Houston Texans.

I didn’t think I would be talking about Cam again this year but here we are. The Panthers offense had been a mess with Darnold behind center, but I have optimism about the Panthers offense with Cam leading the way. We know that Cam is no longer the elite option he has been but he still has enough left in the tank to be a solid streaming option going forward. Newton is a high-end QB2 with upside against a weak Washington defense in week 11.

Jimmy has been a lot better than most expected him to be in 2021. The 49ers offense as a whole has been performing pretty well lately. Jimmy does not offer much running upside but he does offer a solid floor with plenty of upside most weeks. This week’s matchup against the Jaguars is great and he should be a viable starting option this week. Jimmy G is a mid-tier QB2 with upside in week 11.

Wilson had a disappointing game last week against the Packers. This week’s matchup should prove to be just as difficult if not more. I would look elsewhere for a starting QB this week. I worry that Wilson’s floor and the ceiling are extremely low. Wilson is a low-end QB1 that is a very risky start in week 11.

Wentz looked straight bad last week and this week doesn’t have much more upside. The Buffalo Bills have been one of the top defenses in the league and have been able to shut down opposing offenses quite successfully. I would look for a QB starting option with a higher floor and ceiling than Wentz in week 11. He is a low-end QB2 this week.

Taylor has been a solid starting option in most weeks as he consistently offers a mid-tier floor for those who have started him. The problem is that Taylor does not offer much of a ceiling and that limits the optimism that one can have about starting him this week. That combined with the fact that the Panthers have been one of the top defenses in the league makes me confident in sitting him in week 11. I would look to start a QB with a higher ceiling than Taylor offers in week 11. Taylor is a low-end QB2 with little upside this week.

Dillon is now the main man in Green Bay and jeez did it come at a perfect time. This week’s matchup against the Vikings is perfect for Dillon and he should have no problem running all over their defense. If you needed a push to play Dillon, here it is. You should have total confidence rolling him out in week 11. Dillon is a low-end RB1 with an upside this week.

Gaskin has been hit or misses this season but I have a feeling that this week’s matchup against the Jets is going to be one of the hits. Gaskin has been receiving a decent workload as of late and should be able to produce a solid stat line in week 11. Gaskin is a low-end RB2 with upside this week.

Foreman looks to be the Titans best running back. Adrian Peterson should be the only other healthy running back present this weekend, which means that they should share the load. Peterson has looked old as of late, so I would expect Foreman to be the more productive of the two. With a great matchup and plenty of carries coming his way, I like Foreman’s chances at succeeding. Foreman is a solid flex play in week 11.

Moss just hasn’t been all that great as of late. He is not receiving a large enough workload to succeed and isn’t doing much with what he is receiving either. The unfortunate fact is that Moss is a risky running back start going forward. Even in decent matchups, he offers a low floor and somewhat low ceiling due to the way the Bills are handling the ball. Moss is nothing more than a low-end flex in week 11.

Howard has been great since Miles Sanders went down with an injury. He has been receiving a large carry workload and has had great success in the red zone. The issue is that we don’t know if Miles will be back this week or not. Even if he isn’t, the matchup against the Saints is one I usually avoid when it comes to running backs. Howard’s ceiling is ultimately capped this week due to the difficult matchup. He is a low-end flex in week 11.

Collins hasn’t really looked good over the last couple of weeks. The Seattle offense as a whole looked off last week. Chris Carson was expected back but it doesn’t look like that is happening anytime soon. Collins is also dealing with his own injuries coming into week 11. Even if he does play, the matchup against the Cardinals is on the opposite end of good. Collins is a low-end flex with a safe floor but barely any upside this week.

Renfrow has been as solid as they come at the wide receiver position. He is receiving a great target share and always has touchdown scoring upside. If you are looking for a safe floor with a decent ceiling, Renfrow fits that bill perfectly. He is a low-end WR2 with an upside in week 11.

“Enter all offensive players playing against the Chiefs here”. The fact is that the Chiefs defense is horrible and the Cowboys offense is great. This matchup should be a total shootout and has one of the highest point totals for the week. Gallup is a solid flex option in week 11 especially with Amari Cooper being out.

Williams just hasn’t been the same guy that we had seen just a couple of weeks ago. He has been underperforming greatly and I would not expect a resurgence this week against the Steelers. Although it may be tough to bench Williams, I would look for an option with a better floor this week. Williams is a low-end WR2 with limited upside in week 11.

After looking like the guy in the first few weeks, Marvin has completely fallen out of the spotlight for the Jaguars. We had hoped that he would have been the number 1 target for Trevor Lawrence, but he ultimately looks to be the 3rd or 4th man down on the totem pole. I would look elsewhere for a WR2/ flex play in week 11. Marvin offers both a low floor and ceiling. He is a low-end flex with little upside.

Kenny G has been a disappointment for most of the year mainly due to injury. I understand why some would have some optimism about him since he is back, but he doesn’t really deserve it. Kenny has done nothing to make us think that he is still a WR1 level receiver for fantasy football. It may be the fact that there are many passing options for the Giants or that he doesn’t have a good connection with Daniel Jones. Regardless, I am avoiding starting him this week. Kenny is nothing more than a desperation flex play in week 11.

Pat didn’t produce like we had hoped last week as Big Ben was out due to Covid. Hopefully, Ben is back this week and is able to bring Pat back to his former fantasy glory. Pat has a great matchup against the Chargers this week and should be a great starting option for those who choose to put him in their lineups. Pat is a low-end TE1 with an upside in week 11.

Arnold had been a great starting option since joining the Jaguars. He is constantly being bombarded with targets and there is no reason as to why that should stop. Arnold has performed against tough defenses in the past, so I have no hesitancy in starting in this week against the 49ers. Arnold is a solid low-end TE1 in week 11.

Kmet has been solid over his last two matchups. He has been receiving a solid target share from Justin Fields and looks like he is becoming one of his most trusted targets. If you are in need of a streaming option this week, I would certainly start Kmet against the Ravens. He is a high-end TE2 with an upside in week 11.

Hockenson delivered a goose egg to his fantasy managers last week and I honestly can’t say that he is going to have a much better week in week 11. The Lions are possibly going to be without their starting quarterback, which means that the upside of all of the Lions pass catchers is completely capped. I know you most likely have to start Hockenson but if there was the ability to start a tight end with a safer floor, I would this week. Hockenson is a low-end TE1 with an extremely low floor in week 11.

Cook has been disappointing lately and there aren’t any signs that it is going to get any better going forward. This week’s matchup against the Steelers isn’t great for opposing offenses, as the Steelers should be able to control the upside of Herbert and his offensive weapons. Cook offers a safe floor but not much upside this week. He is a mid-tier TE2 with a limited ceiling in week 11.

Hooper has been boom or bust this year and hasn’t had much consistency whatsoever. This week’s matchup may look good on paper but has the chance to upset many fantasy managers. The Browns may be facing a backup quarterback in week 11, which limits any and all upside of both offensive units. The chances are that this will be a game where the Browns utilize the running game over the passing game. Hooper is a risky start in week 11. He is nothing more than a low-end TE2 this week.