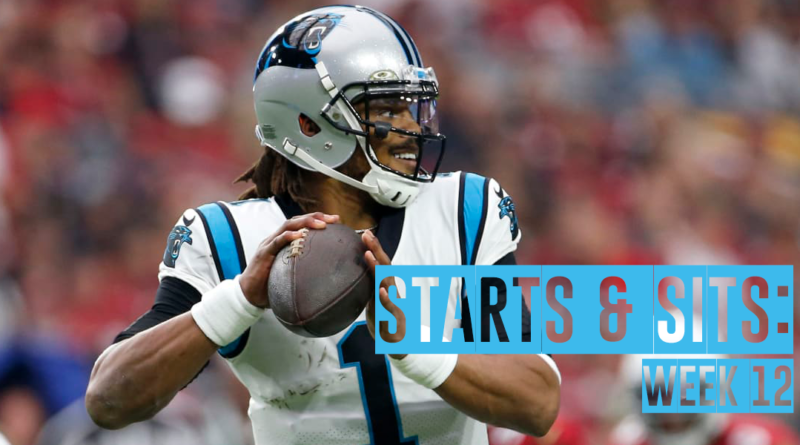 Week 12 is here, so we need to know who to start and who to sit. Our start/sit article is not going to discuss the obvious players who should always be played. We examine matchups and usage from week to week, which should give you the best chance at winning your weekly matchup. Good luck this week and don’t forget to not overthink it. Here are the Starts/ Sits for Week 12:

Cam is back, at least from a fantasy football perspective. He showed that he still has some juice left and should be able to utilize his legs against the Miami Dolphins this week. Cam has plenty of weapons to utilize and should have no problem producing another solid stat line in week 12. Cam is a low-end QB1 with upside in week 12.

Cousins has been better than expected lately and should continue that success this week against the 49ers. The 49ers defense has been alright but it is not the elite defense that we have known in the past. This has the makeup to be a great high scoring game. I would be more than happy to start Cousins this week. He is a high-end QB2 with upside in week 12.

Tyrod has been great in almost every game that he has played this year, the problem is that he has only played in a handful of games. This week he faces a horrible New York Jets defense and should be able to give those that start him a serviceable streaming-worthy stat line. If you are in need of a low-cost streaming option with a solid floor and decent upside, Taylor is your guy this week. Taylor is a mid-tier QB2 with upside in week 12.

Carr and the Raiders offense has been a mess lately and it doesn’t look like it’s going to get better this week against the Dallas Cowboys. Although they didn’t look like it last week, the Dallas defense is still in the top tier in the NFL. They should present issues for Carr early and often on Thanksgiving. I would look for an option with a higher floor and ceiling than Carr this week. Carr is a risky high-end QB2 in week 12.

Tannehill has been dealt a tough hand this year. The Titans will now be without Henry, Brown, Jones, and Johnson for at least this week, which leaves Tannehill with pretty much no real offensive talent against the Patriots in week 12. I am afraid of what his floor is this week, especially with how good the Patriots defense has been playing lately. Tannehill is a low-end QB2 with little upside in week 12.

There was a time when I was confident in Jones being a good fantasy football option but that time has come and passed. He is much too inconsistent to stream even in a decent matchup against the Eagles this week. At this point in the season you need at the very least a solid floor play and Jones no longer is a guarantee to even do that. Jones is purely a low-end QB2 in week 12.

Revenge game anyone?! In all seriousness, this is a good game for the Broncos running backs, especially Gordon. Gordon has surprisingly been a serviceable option in most weeks and should continue that this week against the Chargers. It also helps that Gordon receives most of the goal-line touches. Start Gordon with confidence this week. He is a low-end RB2 with an upside in week 12.

Freeman is the lead back for the Ravens, it is that simple. They cut Bell because of their confidence in Freeman and even with Murray being back, Freeman was the main guy. This week’s matchup against the Browns is not sublime but I do believe that Freeman offers a solid floor and ceiling every week. Freeman is a high-end flex with upside in week 12.

While some may believe that Tevin Coleman is the next man up for the Jets, I would beg to differ. Outside of this past week, Johnson had been an every-week flex option. He offers the most upside out of any of the running backs left and I believe he will be the main beneficiary of the Carter injury. Johnson is a solid flex play in week 12.

Just when you thought the Bills’ running backs production couldn’t be any worse, they brought Matt Breida into the fold. This week’s matchup against the Saints is also on the more difficult side, so ultimately I would be benching all of the Bills running backs going forward. They are all risky low-end flexes with limited upside in week 12.

Murray is no longer the running back that I want in Baltimore. He may have value at times but it is hard to guess when those would be. Going forward I would leave Murray on my bench unless you are completely desperate. He offers a very low ceiling and floor in week 12 against the Browns. He is a low-end flex this week.

While some may be excited about starting Johnson against the Jets this week, I am not as optimistic about the Texans running backs as a whole. The fact is that Rex Burkehead was the main guy last week and he still was not able to produce flex-worthy numbers. I would altogether avoid playing any of the Texans running backs. Johnson is a low-end flex option in week 12.

Mooney, Mooney, Mooney, Mooney, Mooooooney. Darnell is the WR1 for the Chicago Bears. Without Allen Robinson, it was unclear if Mooney would continue to have success but he has. He has a great matchup against the Lions on Thanksgiving day and should be a solid option for those who have him starting this week. Mooney is a high-end flex with upside in week 12.

After being dead to the 49ers, Aiyuk is back to being a solid fantasy football asset. This week’s matchup is as good as it gets, as the Vikings should be able to compete and make this a solid matchup in week 12. Aiyuk should have no problem being a top 3 option for the 49ers again this week. Aiyuk is a high-end flex with upside in week 12.

With Agnew being put on IR, Jones should once again take over the lead role for the Jaguars. He has shown potential throughout the season but he has not been consistent this year. I believe this week’s matchup against the Falcons will turn that around and Jones should be a solid flex option in week 12.

Sutton has been pretty disappointing lately and I am not sure it will be better in this week’s matchup against the Chargers. Teddy B has been targeting the other pass catchers on the team over Sutton and I couldn’t imagine why that would stop all of a sudden. Sutton is a high-end flex with an extremely low ceiling in week 12.

Coming into this season I had believed that Davis could be the WR1 for the Jets, but now it looks like he is currently the 3rd option for New York. It is hard to get excited by Davis after we have seen how Moore has been playing lately. The matchup is good this week but as we know nothing is consistent when it comes to Zach Wilsons game. I would look for a more consistent option this week. Davis is a high-end flex play that offers boom/bust potential in week 12.

The Buffalo offense has been extremely disappointing over the last couple of matchups and I truly don’t know if it is going to be getting any better going forward. This week’s matchup is decent but it is hard to rely upon a guy who hasn’t been able to produce WR3/ flex numbers since the Bills bye week. I would personally look to start someone with a higher ceiling this late in the season. Sanders is a risky flex play in week 12.

Schultz is one of the few starters left on the offensive side of the ball for the Cowboys. Amari Cooper is out due to Covid and Ceedee Lamb might be out because of the concussion he received from last week’s game. Even if Lamb plays, Schultz should still be one of the top options for the Cowboys this week against the Raiders. Schultz should have no problem having a successful week in week 12. He is a mid-tier TE1 with upside.

A touchdown saved Pat’s day this past weekend, but I feel that brighter days are ahead for the rookie tight end. Eric Ebron is once again injured, which means that Pat should be the main guy at the tight end position for the Steelers for the foreseeable future. Pat should be started with confidence this week against the Bengals. He is a high-end TE2 with upside this week.

Fant hasn’t been a top-tier TE1 as we had hoped, but he has been a serviceable low-end TE1/high-end TE2 in most weeks. This week’s matchup against the Chargers is pretty juicy as they have been one of the worst teams at covering the tight end position. I would be happy starting Fant in what should be a decently high-scoring affair. Fant is a high-end TE2 in week 12.

Henry relies upon touchdowns to have success like most tight ends do. This week’s matchup could very well have a low floor for all players involved. The chances are that the Patriots will lean on the run game to run out the clock. If Henry doesn’t receive an early touchdown, I believe he will disappoint those who started him this week. Henry is a risky high-end TE2.

Cook just hasn’t been able to produce consistently lately and is a risky start on any given week. The issue is that there are at least three players that receive targets ahead of Cook, which limits any and all upside he might have. Cook is purely a touchdown or bust play this week against the Broncos. He is a mid-tier TE2 with limited upside.

Kmet didn’t perform like we had hoped he would have last week. Justin Fields will be out this week, which ultimately hurts Kmet’s chances at succeeding against the Lions. Kmet is too risky to start until Fields is back. Kmet is nothing more than a low-end TE 2 in week 12.