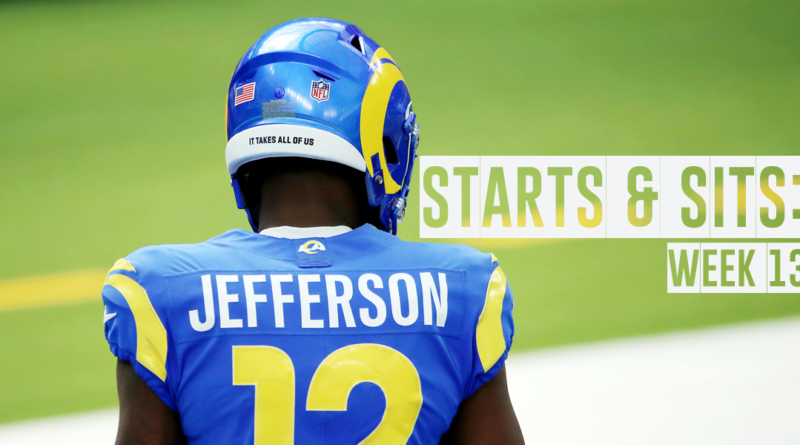 Week 13 is here, so we need to know who to start and who to sit. Our start/sit article is not going to discuss the obvious players who should always be played. We examine matchups and usage from week to week, which should give you the best chance at winning your weekly matchup. Good luck this week and don’t forget to not overthink it. Here are the Starts/ Sits for Week 13:

Insert any viable starting QB playing against the Houston Texans. Wentz has been great lately for the most part and that shouldn’t change this week against the Houston Texans. The Colts run game and the passing game is firing on all cylinders. The Texans offense is also capable of putting up some points which should keep the Colts involved for most of the game. Wentz is my top streaming option at QB this week. He is a low-end QB1 with an upside in week 13.

Cousins has been solid so far this year. I would say that Cousins offers one of the safest floors in fantasy and also has a decently high ceiling depending on the matchup. This week’s matchup is as good as it gets against the Detroit Lions. The Vikings will have plenty of opportunities to score in the run and passing game. If you need a solid streaming option, I would be confident in starting Cousins this week. He is a high-end QB2 with an upside in week 13.

Jimmy hasn’t been great by any means lately but he has offered a decent floor in most of his matchups this year. This week he has a good matchup against a weak Seattle defense. Even without Deebo, I believe that Jimmy has enough talent surrounding him to succeed in week 13. Jimmy is a mid-tier QB2 with upside this week.

Ryan has been dealt a tough hand this season, so this is not to go against what he is as a QB. The fact is that outside of Cordarelle Patterson and Kyle Pitts, the Falcons offense is pretty bare when it comes to talent. The Tampa Bay Bucs have been great defensively and have been able to control offenses that are much more equipped to succeed. I would personally look elsewhere for a QB play that has a safer floor and more upside in week 13. Ryan is a low-end QB2 with limited upside in week 13.

Dalton looked great last week but unfortunately, you can’t play the Lions every week. The Arizona Cardinals are one of the top defenses in the league and have shown the ability to lower the upside of opposing quarterbacks. The Bears will have brighter days but I would prefer to stream a better starting option that has a safer floor and ceiling. Dalton is a low-end QB2 in week 13.

Jones looked great this past week but this week I do not have the same optimism. The Buffalo Bills are one of the better defenses in the league. They have been able to limit opposing offenses week in and week out. There is a really good chance that this is a low-scoring matchup due to both teams having top-tier defenses. Jones should offer an okay floor play but his ceiling is ultimately capped due to the matchup. Jones is a low-end QB2 with very little upside in week 13.

Williams is the man in Detroit, at least for this week. He has shown the ability to succeed in the past and now he doesn’t have to worry about sharing reps with Swift. This week’s matchup against the Vikings is also pretty solid. I like Williams chances at succeeding this week. Williams is a mid-tier RB2 with upside in week 13.

Did Javonte break out last week? I guess we will see how he is used this week against the Chiefs. Williams looked like the better running back but that doesn’t mean that the Broncos are going to stop using the 2 RB approach. Regardless, I like what Javonte has done recently and he should continue to have a similar upside this week. Williams is a low-end RB2 with upside in week 13.

Who did Joe Mixon just thrash one week ago? That’s right the Pittsburgh Steelers. Now Freeman is not an elite option like Mixon, but he is a serviceable starting option this week. Freeman is the best running back on the Ravens and has continued to receive a great share of the carries. His workload should give him enough upside to be a high-end flex in week 13.

Burkhead is certainly receiving a great workload but as we have seen all year it doesn’t amount to much for the Houston Texans. The matchup is not bad but the issue is that the Texans are usually playing catchup for most of the game which would ultimately take away from the running back positions upside. Burkhead is a risky low-end flex play in week 13.

The Buffalo Bills running back group is all over the place. Matt Breida now looks to be the most successful running back over the last couple of weeks. The matchup isn’t horrible but it also doesn’t offer a lot of upsides. I would assume that this is going to be a low-scoring affair. Singletary offers an okay floor but a low ceiling in week 13. Devin is flex play with limited upside in week 13.

Smith and the Eagles offense haven’t been on the same page lately. This week’s matchup against the Jets should turn everything around for Smith. The Jets are one of the worst defenses in the league and have no real ability at covering talented pass catchers. If you are leaning on the fence about starting Smith, this is the push that you might need to put him in your WR2/ flex spot this week. Smith is a high-end flex with upside in week 13.

Although OBJ performed well last week, Jefferson’s performance gave me confidence that he is going to have a bright future ahead of him. With Woods out we expected someone to take over and it looks like it is going to be both Jefferson and OBJ. The good thing is that the Rams are an elite offense and should be able to have 3 fantasy-relevant wide receivers. It is also interesting that they look like they are utilizing the WR position over the tight end position, which also gives you the ability to trust the 3rd passing option. This week they have a great matchup against a poor Jaguars defense. Jefferson should have no problem giving fantasy managers another solid stat line. Jefferson is a high-end flex with an upside in week 13.

The Cardinals situation is still a little murky even after their week 12 bye week. The issue at hand is that we don’t know if they are going to have Kyler and Hopkins in week 13. If they do not, then Kirk is once again a viable streaming option. He has continued to be the main guy in Hopkins absence and should have value this week against the Chicago Bears. Kirk is a high-end WR3/ flex option in week 13.

Williams was someone that I was extremely high on coming into the season and at first, I thought I was right about him. Lately, we just haven’t seen the same production that he was able to have early in the season. He is no longer the set it and forget it type of player. This week’s matchup will prove to be more difficult than most believe as the Bengals secondary has been playing very well lately. I understand starting Williams if you have to but he ultimately could underperform this week once again. Williams is a low-end WR2 with a low ceiling in week 13.

The best thing I can say about Sutton this year is that he got paid. The fact is that he has been a non-factor for fantasy most of the year and it certainly doesn’t look like it is going to get any better. The Kansas City Chiefs defense has been playing a lot better as of late which makes me hesitant to play any of the Broncos pass catchers. Sutton is nothing more than a boom/bust flex play in week 13.

Meyers looked good last week but this week may hold a different outcome. The Buffalo Bills are one of the best defenses in the league and have been able to keep wide receivers under wraps. The outlook on this matchup is bleak and has the chance to be a really low-scoring game. Ultimately I would look elsewhere for an option with a higher floor and ceiling. Meyers is a low-end flex in week 13.

I think there is truly a case for Pat to be the best rookie tight end in 2021. He has been a solid starting option over the last couple of weeks and his upside is immense going forward. It is so hard to find a starting option at tight end that is receiving a high number of targets on a weekly basis, but that is exactly what Pat offers. He also offers weekly touchdown upside as he is one of the top red-zone targets for Big Ben. Pat is a great starting option going forward and this week’s matchup against the Ravens is perfect. Pat is a low-end TE1 with an upside in week 13.

Moreau is now the guy since Darren Waller is out due to another injury. He looked good the last time he was the starting tight end for the Raiders. This week’s matchup against the Washington Football team is as good as it gets. If you are in need of a startable streaming option this week, Foster would be a solid option. Moreau is a high-end TE2 with an upside in week 13.

On paper, Thomas didn’t do well last week but that is not necessarily true. He was coming off a decent injury and had a touchdown called back due to a penalty. I think Thomas is going to be just fine going forward. This week’s matchup against the Raiders is great and he should have no problem being a viable starting option for fantasy managers. Thomas is a high-end TE2 with an upside in week 13.

I had really high hopes for Fant this year but he has not been a consistent option pretty much for the whole year. He has an incredibly low floor which makes me hesitant to even put him in my starting lineup. The fact is that we know how high his ceiling is but we have never seen him have steady production on a weekly basis. Fant is a risky option going forward. He always offers a high upside but the chances that he will disappoint us is high as well. Fant is a risky mid-tier TE2 in week 13.

Higbee has been disappointing this year. He has shown glimpses of what we had hoped he would be but he has not consistently been able to produce in fantasy. The fact is that this matchup is juicy but do we really trust that Higbee is going to be able to take advantage of it. The answer is most likely not. I would personally look for a more reliable option this week. Higbee is a boom/bust mid-tier TE2 in week 13.

Conklin has been a great streaming option throughout most of the season but lately, he is not producing enough to warrant starting him. Kirk Cousins has been relying upon Jefferson and Thielen over Conklin lately, I would expect him to do the same going forward especially without Dalvin Cook playing this week. Conklin offers an alright floor but his ceiling is consistently capped due to being the 3rd option on the Vikings at best. Conklin is a low-end TE2 in week 13.