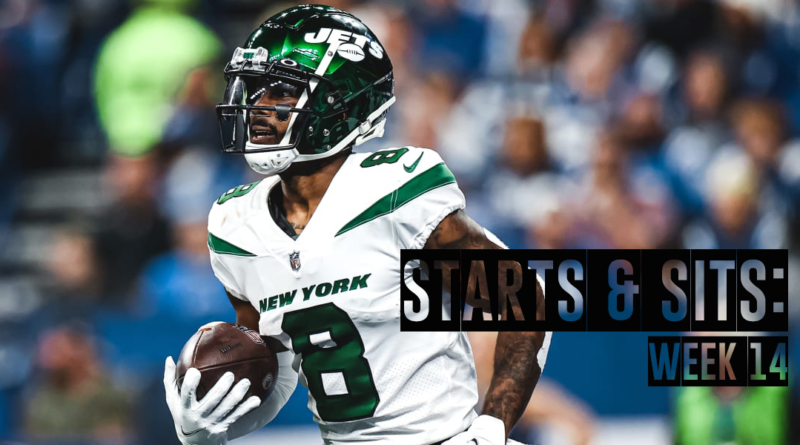 Week 14 is here, so we need to know who to start and who to sit. Our start/sit article is not going to discuss the obvious players who should always be played. We examine matchups and usage from week to week, which should give you the best chance at winning your weekly matchup. Good luck this week and don’t forget to not overthink it. Here are the Starts/ Sits for Week 14:

As long as Hill plays this week, he offers the most upside of all the streaming-level QB’s out there. Last week the New York Jets made Gardner Minshew look like a superstar, so Hill should be able to do the same at the very least. Hill offers upside with his legs, which allows him to have a larger ceiling than most QB’s coming off the waivers. If you picked Hill up this week you should be able to start him with confidence. He is a low-end QB1 with an upside in week 14.

Newton is once again the starter for the Panthers and should be looking at a comeback matchup this weekend against the Falcons. If Taysom Hill isn’t available on your waivers, Newton is most likely the best streaming option available. Newton still has enough juice to utilize his legs and should be able to utilize his arm enough to warrant starting him this week. Cam is a high-end QB2 with upside in week 14.

Big Ben is not the same guy that we have known in the past but he has been a serviceable streaming option at times this season. If you are in a really tight spot at the QB position, you could do a lot worse than Ben this week against the Vikings. This matchup has the ability to be a high scoring situation

I would be hesitant to play Fields against the Bears if he wasn’t coming off of being injured, but he is. The fact is that the Packers defense has been sneakily good and they should be able to control the game against the Bears this week. Although Fields has upside with his legs, it wouldn’t be enough for me to gamble on playing him in an important week 14 matchup. Fields is a mid-tier QB2 with boom/bust upside in week 14.

Over the last two matchups, Taylor has not been that wild type of QB that can rack up a lot of points. He has been more calculated and overall the team has been utilizing the run game more as well. This has severely lowered Heinicke’s ceiling and he just isn’t trustworthy even in matchups when Washington should be playing catch up. Heinicke is a mid-tier QB2 with a limited ceiling in week 14.

Carr just hasn’t been the streaming option that we have had at times this season lately. There could be many reasons as to why this is, especially with all the injuries and turmoil that the Raiders organization has been through in 2021. Usually, I would have been pro Carr in a matchup against the Chiefs but that is no longer the case. The Kansas City defense has been playing a lot better over the last couple of games and that should continue this week against the Raiders. Carr is a low-end QB2 in week 14.

Although it looked like Chuba was not the backup in the last matchup, I am still betting on him being the most talented running back left on the Panthers. Chuba comes into the starting position again with a great matchup against a weak Falcons defense. If you need a low-end RB2/high-end flex play, I would be fine rolling Hubbard out this week. He is a high-end RB3/ Flex in week 14 with upside.

Now, this is based solely on if Gordon plays this week or not. If he does play, he is automatically someone I would want to start. The Detroit Lions are a basement defense when it comes to the running back position. They give up a ton of points and I like Gordon’s upside even while splitting carries with Javonte. Gordon is a high-end flex with an upside in week 14.

I never thought I would be saying to start Peterson again but here we are. This week’s matchup is as good as it gets at the running back position. The Seattle Seahawks backfield is a mess, but if I had to bet on one of them scoring a touchdown it is Peterson. Peterson should be able to deliver enough yardage this week to warrant flex value with upside in week 14.

Coleman has been a viable flex option over the last two weeks, but it is hard to trust him this week against the New Orleans Saints. The Jets should have an easier time with the passing game this week and will most likely avoid using the running game unless they are on the goal line. Relying on Coleman this week is risky. Coleman is a high-end flex with a limited ceiling in week 14.

Usually, the pass-catching running back can succeed against Tampa Bay, but I don’t think that Singletary will receive enough targets this week to warrant being started. The Bills running back group as a whole is a mess with three running backs competing for snaps. There is not one that you can say is a lock on any given week, which makes me hesitant to play the one that I have projected the highest. Singletary is a flex with a low floor and ceiling in week 14.

Don’t be fooled by Davis’ solid fantasy day in week 13, he isn’t going to do that every week going forward. If you look at Davis’ production he has not had many flex-worthy starts, which means that his overall ceiling is almost nonexistent every week. The Carolina Panthers are also one of the better defenses against the run, so you are better off looking for a starting option with a higher ceiling and floor than Davis in week 14. Davis is a low-end flex this week.

Moore has been a total surprise in fantasy this year. He has been a great starting option over the last several weeks no matter who his QB is. This week he has a great matchup against a weak Saints secondary. Put Moore into your lineup, sit back and enjoy the show. Moore is a low-end WR2 with great upside in week 14.

Renfrow is pretty much the last man standing for the Raiders. The Raiders lost Ruggs due to his circumstances and have been dealing with an injured Darren Waller throughout the season which has hampered most of the team’s fantasy upside. Renfrow has been the one piece of stability on the offensive side of the ball and that should continue going forward. Although I am not confident in Carr, I am confident that Renfrow will receive a large enough target share to be started in week 14. Renfrow is a high-end WR2 with an upside this week.

Osborn should now be the WR2 for the Vikings and we already know how valuable that position can be. Osborn has shown upside throughout the season but faded due to the low number of touchdowns that he has been receiving. This week’s matchup against the Steelers has the chance to be a high-scoring event, which makes me confident that Osborn can produce in week 14. Osborn is a flex with an upside in week 14.

This is not to go against Cook’s talent, this is more based on the fact that the Texans defense is just plain bad. The Texans will most likely be without Tyrod this week and will have Davis Mills start once again. In such an important week, I would look for someone with a better situation than Cooks is dealing with right now. Cooks is a high-end flex with the capability of having a really low floor and ceiling in week 14.

The Denver Broncos offense as a whole has been bad, outside of the RB position of course. The passing game just hasn’t been working lately and I am not sure it is going to get better. This week’s matchup is pretty juicy but I feel that the Broncos are going to utilize the running game and use the passing game as a secondary option in week 14. Due to this I am fading Jeudy in week 14. Jeudy is a WR3/flex with a low floor and very little upside this week.

I had high hopes for Jones coming into the season but they never materialized in Jacksonville. Although I believe that he is the best WR in town, the fact is that he is not seeing enough targets to be started in fantasy. He is barely worth rostering at the moment as there are sure to be players on the waiver wire with higher upside than Jones. Jones is a low-end flex with a low floor and ceiling in week 14.

The Muth has been let luth! Last week wasn’t as great as it could have been but it doesn’t deter me from starting Pat going forward. Pat still has one of the safest floors and the highest upsides at the tight end position. I would be confident in starting this week against the Vikings. He is a low-end TE1 with upside this week.

Conklin is once again fantasy relevant with Adam Thielen being out this week. He has been a consistent option for most of this year and has been one of the safer options available off of the waiver wire. Conklin should be the 3rd/ 4th passing option against the Steelers this week. Conklin is a high-end TE2 with an upside in week 14.

Unfortunately, Logan Thomas has been placed on season-ending IR. This means that RSJ is once again a viable starting option at the tight end position. We know the ceiling that RSJ has, it is nothing special but does warrant him being started in all formats. RSJ is a mid-tier TE2 with an upside in week 14.

It has been tough sledding for Ertz lately. He had moments with the Cardinals but the production just hasn’t been there at a consistent level. This week has a good chance at being one of the highest-scoring matchups this week but I am still not optimistic about his overall upside. Ertz is a risky play this week as we have seen his low floor in the past couple of weeks. Ertz is a low-end TE1 with limited upside in week 14.

Everett has been good at times throughout the year but he hasn’t been reliable enough to be a startable option in fantasy. This week’s matchup is pretty good, the issue at hand is if he doesn’t get a touchdown early on, I could see him having very minimal production this week. Everett is a low-end TE2 with a low floor and ceiling in week 14.

Engram is just not in the kind of offense where you would expect him to produce in fantasy football. The Giants as a whole are pretty bad and now they are about to be starting their 3rd string QB in week 14. Ultimately there has to be a better option available on your waiver wire that offers at least a higher floor. Engram is a low-end TE2 with little upside in week 14.