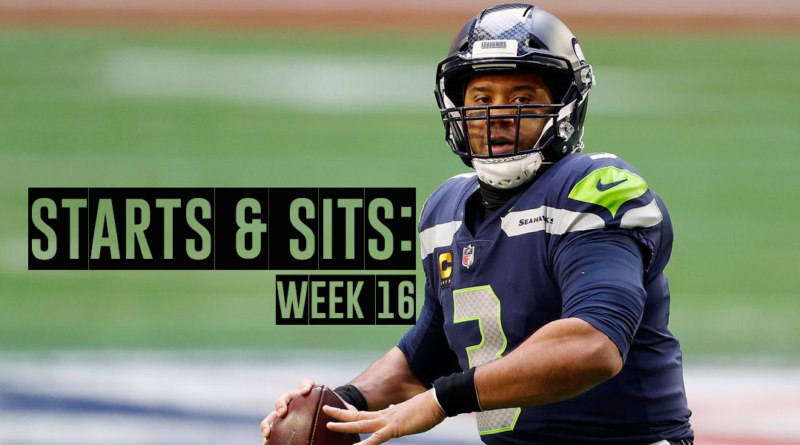 Week 16 is here, so we need to know who to start and who to sit. Our start/sit article is not going to discuss the obvious players who should always be played. We examine matchups and usage from week to week, which should give you the best chance at winning your playoff matchup. Good luck this week and don’t forget to not overthink it. Here are the Starts/ Sits for Week 16:

Burrow hasn’t been a league-winning type of QB throughout most of this year, but that doesn’t mean that he can’t be a solid part of your playoff run. The last time Burrow played the Ravens, he was a QB1 that week. The interesting thing is that the Raven’s defense has gotten worse due to injury since their last matchup. Burrow is a high-end QB2 with QB1 upside in week 16.

Wilson hasn’t been the elite kind of quarterback that we have known in the past in 2021. He has offered a very low ceiling lately, but I believe that he will fare well against the Bears this week. With all the Covid issues lately, you have to take what you can get. Wilson is a mid-tier QB2 with upside in week 16.

The Raiders have been through a lot this year and you can see that through their play on a weekly basis. As much as we would love to trust Carr, his play this year has been downright sporadic. I would look elsewhere for your starting QB this week, as Carr doesn’t offer a safe floor or much upside. Carr is a mid-tier QB2 with low upside.

Don’t let last week’s matchup fool you, Cam is not a reliable option this week against the Tampa Bay Buccaneers. The Panthers coaching staff is not making sound decisions as of late, and there is a good chance that Cam doesn’t even play the whole game. That included with the fact that Tampa has a solid defense makes me hesitant to play Cam in such an important week. Cam is a risky low-end QB2 with limited upside in week 16.

Harris is once again the man in New England with Stevenson out due to Covid. We all saw what Harris was able to do the last time he played Buffalo, so I am intrigued to see what he is able to do under better weather circumstances. Harris is a low-end RB2 in week 16.

The Broncos backfield is one of the only bright spots for the Broncos offense. The combination of Gordon and Williams has been working all year and I don’t see why that would change now. This week’s matchup is favorable as the Raiders have been susceptible to the running back position. Gordon is a high-end flex with upside in week 16.

Johnson looked great last week, but if I had to bet I would say it was just a flash in the pan. It is hard for me to trust the Dolphins running backs, mainly due to the fact that it could literally be any of them that is featured on any given week. The matchup against the Saints adds to my reasoning on benching Johnson as they have been one of the best defenses against the run. Johnson is nothing more than a low-end flex with boom/bust potential in week 16.

“Insert any running back playing against the Tampa Bay Bucs here” The fact is that even when Chuba was the only back being utilized earlier this season, he was not really able to deliver a high floor for his fantasy managers. Now the Panthers pretty much have a three-headed committee which includes their current starting QB in Cam Newton. Chuba is not receiving a big enough workload to warrant starting, especially not against such a formidable opponent. Chuba is a low-end flex with a low floor and ceiling in week 16.

Although Parker will most likely not be the WR1 for the Dolphins with Waddle back, he still offers enough upside to warrant playing him this week. Parker has shown his ability throughout the year and has a solid connection with Tua Tagovailoa. Parker offers a safe floor with a high upside on a weekly basis. I would trust having Parker in my WR2/Flex spot this week. He is a high-end flex with an upside in week 16.

I know what you’re thinking but I really think Claypool could produce this week against the Chiefs. The Steelers will most likely be playing catch-up against the Chiefs which should help all of the Steelers pass catchers. The Steelers are also going to be without their up-and-coming rookie tight end Pat Freiermuth this week, which should allow Claypool more opportunities as well. Claypool is a solid flex play with upside in week 16.

Brown is not only without Lamar Jackson but also will be without Huntley this week. The Ravens are currently on their third-string QB and it is hard to trust Brown in such an important week with the current situation. The matchup is decent but the fact is that you don’t know how the targets will be dispersed this week. Brown is a risky low-end WR2 with a low floor in week 16.

Terry has had a rough season and it does not look like it is going to get any better this week against the Cowboys. The Washington Football Team has been a mess lately with injuries and covid. The Cowboys defense has also been playing much better lately which limits any and all upside that Terry might have. I would not trust starting Terry in the Semis. Terry is a low-end WR2 with limited upside in week 16.

Kmet has shown promise in his second year in the league and has a great matchup this week against the Seattle Seahawks. Even with Nick Foles behind center, I have faith in Kmet as Foles has been known to utilize the TE position heavily in the past. Kmet is a high-end TE2 with an upside in week 16.

Fant has been better as of late and I am willing to roll the dice on him this week against a Raiders team that he sliced and diced earlier this season. Fant has been a favored target of Drew Lock in the past which makes me even more confident in playing him this week. Fant offers a safe floor and a decent ceiling. Fant is a high-end TE2 with plenty of upsides in week 16.

Conklin was great in the first half of this year but has really fallen off lately. Even without Thielen active, Conklin has been extremely disappointing. It is hard to trust any passing option outside of Thielen and Jefferson, which makes me feel alright about looking elsewhere for my tight-end streaming option. Conklin is a mid-tier TE2 with a low floor and low ceiling in week 16.

Higbee is hard to trust especially after not playing for two weeks. Higbee hadn’t really delivered before that either which makes me hesitant to want to trust him in such an important week as this. Higbee is purely a desperation play at the tight end position and you are hoping that he scores a touchdown like you would for any TE. Higbee is a mid-tier TE2 with limited upside in week 16.