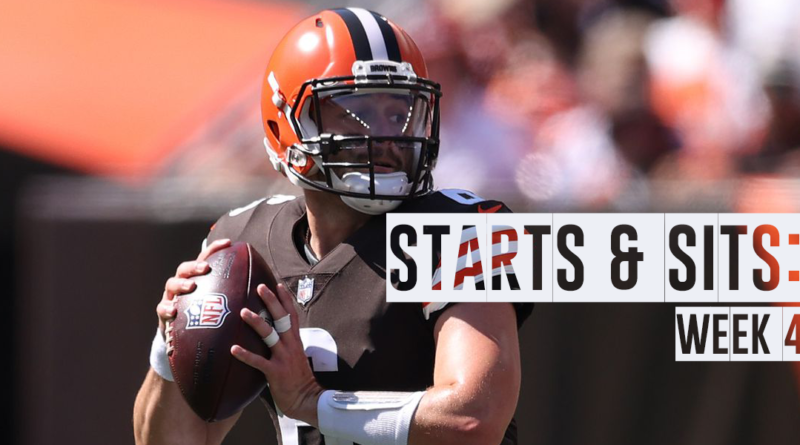 Week 4 is here, so we need to know who to start and who to sit. Our start/sit article is not going to discuss the obvious players who should always be played. We examine matchups and usage from week to week, which should give you the best chance at winning your weekly matchup. Good luck this week and don’t forget to not overthink it. Here are the Starts/ Sits for Week 4:

The matchup looks like a situation where you wouldn’t want to start Carr, but so have the other 3 matchups that he has played in so far this year. I think Carr is a bonafide streaming option going forward. He very well may turn into a every week starter if he continues to play the way he has been going forward. Carr is a high end QB2 with upside going this week against the Chargers.

Baker hasn’t been all that good so far this year but I believe this will be the matchup to turn him around a bit. In what should be a high scoring matchup, Baker will have to rely upon his arm to have success. Baker is a QB2 with solid upside in week 4.

Jimmy G isn’t a league winner but he is a streamable QB when the matchup is juicy. This week’s matchup is very juicy and could very well turn into a shootout between the Niners and the Seahawks. If you need a solid starting option from the waivers Jimmy would be my guy. He is a mid tier QB2 with great upside.

Things are not going well for Tannehill this year. His offense just isn’t performing how you’d hope and things could be even worse for him going forward. There is speculation that he could be without AJ Brown and Julio Jones as they are both injured. If that is the case then I would fade Tannehill even against a decent matchup against the Jets. Tannehill is a mid tier QB2 with limited upside this week.

Jones had a sweet matchup last week and as we all saw he couldn’t capitalize on it. This week is not the same type of matchup as the Saints have a top-tier defense and should give Jones a hard time. With little upside this week, Jones should be left on your bench or waivers in week 4. Jones is a low-end QB2 in week 4.

Wentz has been average when starting for the Colts this year but his upside might be capped in what should be one of his toughest matchups so far this year. If I were to bet, I think the Colts will be utilizing the run game heavily in week 4. Look for a quarterback with a higher upside and a weaker opponent in week 4.  Wentz is a low-end QB3 this week.

CEH was in no man’s land for most of those that rostered him. If you ended up playing him though you were handsomely rewarded as he put up his best stat line of 2021. We are hoping that his usage continues this week as he is facing a decent matchup against the Philadelphia Eagles. CEH is a mid-tier RB2 with RB1 upside in week 4.

Hunt looked like his old self last week and I like his chances of having another great fantasy day this week against the Vikings. This game could very well be a high-scoring matchup, which makes me like the chances that Hunt will be utilized in the passing game and running game. Hunt is a low-end RB2 with upside in week 4.

I was hesitant to start Moss previously especially after being inactive in week 1 but it looks like he has the most upside of the two running backs through the last two weeks. Moss is not a league winner but he is a viable streaming option depending on the matchup. I like the chances that the Bills are in the lead for most of the game which means they will be running out the clock. Moss is a high-end flex with touchdown upside in week 4.

Harris is the guy in New England, mainly because he is currently the last one standing as the Patriots just lost James White. That doesn’t mean that he is an auto-start every week. The Tampa Bay Bucs are one of the fiercest defenses this year and have been very strong against the run game. I would look elsewhere for my RB2/ flex play this week as I feel that Harris’ ceiling is extremely low. Harris is a flex play in week 4 with very little upside.

Welp, I was wrong once again about the Tampa Bay backfield. I thought for sure that Fournette was the guy but it certainly did not seem that way last week. It could be that the team was down for most of the game, so I won’t hold it against Fournette too much. This week does not offer that much upside though as the Patriots defense is still one of the best in the league. I would look to start a player with a better floor and ceiling in week 4. Fournette is a flex with limited upside in week 4.

Gaskin has been subpar so far this season and there are multiple reasons why. The main reason is that as a whole the Dolphins defense has been a mess. There is a different hot hand every given week, Tua is hurt, and Gaskin is not being given a workload that would give him the ability to succeed in such a situation. This week the Dolphins face a more than capable Colts team. If you have a better option I would recommend benching Gaskin this week. He is a Low end RB2 with a limited upside in week 4.

OBJ looked great in his first game back since his injury last year. This week he has a great matchup against a Vikings defense that has plenty of holes. With Jarvis Landry out and the fact that the Browns don’t have any other true weapons in the receiving game, I like OBJ’s chances at succeeding in week 4. OBJ is a high-end flex with upside in week 4.

I don’t know if Aiyuk is out of the doghouse just yet but he looked decent this past week against the Packers. This week he has a great matchup against a Seattle defense that has been bleeding fantasy points to opposing offenses. It may be risky starting him until we see consistent production, but on the other hand, we have already seen what he is capable of last year. Aiyuk is a low-end flex with plenty of upside in week 4.

Beasley has always been known as a PPR guy and his production has continued to come through so far this season. As long as he is hyper-targeted by Josh Allen, Beasley can be put into your flex spots every week. This week’s matchup is juicy and as we saw last week the Bills have no problem scoring a ton of points against a weak opponent. Beasley is a solid flex play with upside this week against the Texans.

Ruggs has been decent over the last two weeks but this upcoming matchup has me thinking he won’t have a good enough stat line to warrant starting him. Ruggs is mainly a boom/ bust on any given week especially when the matchup is right. If you need an upside play in week 4, I would look elsewhere. Ruggs is a low-end flex in week 4.

Anderson has to be one of the biggest disappointments in fantasy this year. Although he wasn’t drafted very high, he was still seen as one of the best mid-round values at the wide receiver position. Anderson just isn’t receiving the target share that he had just one year ago. Without the target share, it is hard to count on him any given week. Anderson is a low-end flex with limited upside going forward.

***Update*** MVS to be placed on short term IR. MVS has been blah so far this season, but the one thing you keep seeing is his target share. He has all the upside in the world but if he doesn’t capitalize on it then he can’t be relied upon. This week’s matchup against the Steelers is also one of the tougher matchups that he has had thus far this season. Sit MVS this week and start a player with a higher floor and ceiling. MVS should be on your bench until we see his production rise at a consistent rate.

Thomas has been as solid as they come. His ceiling is not high but his floor isn’t low either. He continues to receive a decent target share regardless of who his QB is and that should continue going forward. I would feel confident in starting Thomas this week against the Falcons. Thomas is a low-end TE1 with a great floor in week 4.

Higbee isn’t what we had hoped he would be, but he is certainly a starting-caliber tight end in fantasy football. He is in an elite offense who has a high upside scoring every week. This week’s matchup should be a shootout, which gives those who are starting Hibee hope that he will find the endzone. Higbee is a low-end TE1 with an upside in week 4.

Knox hasn’t done anything to blow your socks off but he has been a consistent tight end streamer since the beginning of the season. He is receiving a good target share and looks to be one of Josh Allen’s preferred red-zone targets. Knox is a valid starting option in week 4. He is a mid-tier TE2 with solid upside this week against the Texans.

Engram is back from injury but he is not an auto-start at the TE position. Although TE is a wasteland after a certain point, Engram has not been a reliable option for a couple of seasons now. The Giants receiver group is full of guys that all have around the same talent level which means it is hard to guess who will perform on any given week. Leave Engram on your bench this week for someone who offers both a higher floor and ceiling. Engram is a mid-tier TE2 in week 4.

Cook looked great in week 1 but hasn’t been able to put up a solid stat line since. Cook offers a safe floor for those looking for around 5 points at the tight end position, but his ceiling is ultimately capped until we see his usage increase. Cook is a low-end TE2 with a low upside in week 4.

I am excited about Tremble’s future, but for the moment I am cooling the jets. The Carolina Panthers traded their starting tight end to the Jacksonville Jaguars this past week, which leaves Tremble as the tight end with the highest upside on the team. Tremble is worth an add and stash if you are tight end needy. If he works his way in as one of the main targets for Sam Darnold then he would warrant being started going forward. Let’s see how he does this week against the Cowboys first.