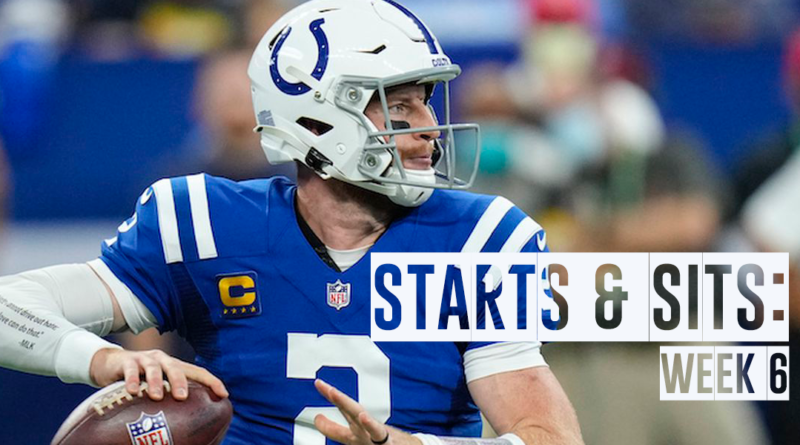 Week 6 is here, so we need to know who to start and who to sit. Our start/sit article is not going to discuss the obvious players who should always be played. We examine matchups and usage from week to week, which should give you the best chance at winning your weekly matchup. Good luck this week and don’t forget to not overthink it. Here are the Starts/ Sits for Week 6:

Burrow has had ups and downs so far this season; this week’s matchup should be one of those positive games. Burrow has plenty of talent surrounding him and should have a healthy Joe Mixon running the ball this week as well. As long as his throat injury doesn’t affect his ability to play, Burrow is a sure-fire streaming option in week 6. He is a high-end QB2 with great upside.

Wentz looked awesome last week against a decent Ravens defense, so this week against Houston should be a breeze. Wentz has a solid offensive line, plenty of viable pass catchers, and a good run game in Indy. If you need a decent streaming option/ bye week fill-in, Wentz is a good option in week 6. Wentz is a mid-tier QB2 with solid upside this week against the Texans.

Darnold had a bad week last week and couldn’t get anything going against the Eagles. This week’s matchup should have a lot more upside for Darnold and the Panthers. Darnold will still most likely be without Christian McCaffrey but Chubba Hubbard should be able to fill in again and D.J. Moore should get his groove back against the Vikings. Darnold is a solid streaming option in week 6. He is a high-end QB2 with upside against a beatable Vikings defense.

This just hasn’t been Tannehill’s year. The team just isn’t performing on a regular basis as they had been just one year ago. That combined with the fact that he has been without his two top wide receivers for multiple weeks certainly isn’t helping his fantasy production either. This week’s matchup against the Bills is just a plain old bad matchup. The Bills defense has been playing at a high level and it shouldn’t be different this week against the Titans. Tannehill is a mid-tier QB2 with a limited ceiling.

Jones hasn’t really been a streamable option this year and week 6 is no different. The Cowboys defense has been playing decently well lately, so overall it is a bad matchup for Jones. Jones really doesn’t have any stars on his team, so his overall upside on a weekly basis is already capped due to that. Jones is a low-end QB2 with a low floor and low ceiling.

Since taking over for the Bears two weeks ago, Fields just really hasn’t been able to do much from a production standpoint. Although the Bears might be down for most of this week’s upcoming matchup, I do not trust Fields enough to think that he has the ability to put up enough points through the air just yet. Until we see Fields have better/more consistent production, he should remain on your bench/ waivers. Fields is a low-end QB2 with barely any upside in week 6.

Williams is now the lead running back for the Chiefs and should get the bulk of the carries until CEH comes back from injury. Surprisingly, Williams was already getting enough usage on a weekly basis to be considered a low-end flex. This week the Chiefs are playing a disappointing Washington defense. This means the Chiefs should be up for the majority of this game and Williams will have plenty of opportunities to run out the clock. Williams is a low-end RB2 with great upside in week 6.

Booker is now the man in New York, at least for the time being. He has shown flashes in the past and has the ability to succeed in the passing and run game. This is not necessarily a great matchup as the Rams defense is elite but Booker should get enough of a workload to warrant his week 6 ranking. Booker is an RB2 with great upside in week 6.

Gaskin surprised everyone last week with a great performance against a tough Buccaneers run defense. This week he faces a much easier opponent and should have no problem running all over the Jaguars defense. As long as they give him the carries, Gaskin is primed to have a successful fantasy day once again. He is a high-end RB2 with a safe floor and massive upside.

Edmonds had been dealing with an injury last week so I am willing to write off his one bad performance. The issue is that we don’t know if he is fully healthy though. Another issue that most haven’t really talked about is how involved James Conner has been over the last 3 weeks. James Conner has been receiving a solid number of carries and it looks as though he is the preferred red zone running back for the Cardinals. The matchup against the Browns is also a tough matchup so his upside this week is capped for multiple reasons. Edmonds is low end RB2 with a low floor and limited ceiling in week 6.

Murray has been decent this year, mainly due to the fact that he is the starting running back for the Baltimore Ravens. The issue is that the real running back for the Ravens plays quarterback. This week’s matchup is decent, as the Chargers have been susceptible to the running game. Personally, I think this game has shoot-out written all over it and there is a chance the Ravens will have to write off the running game. You are banking on a touchdown for Murray in week 6 and if he doesn’t get it you will most likely be disappointed with his output. Murray is a high-end flex with a limited ceiling in week 6.

Dillon had an amazing week 5 as he was used in both the running and passing game. The issue is that I wouldn’t bank on him having that same kind of usage on a weekly basis. If we did see him do that week in and week out then that would be a different story but it hasn’t been the case so far. Dillon is a low-end flex play. I understand needing to play him due to bye weeks but don’t expect the same kind of output he had just one week ago. He has a low floor and ceiling in week 6.

Sanders has been a complete stud over the last three weeks for the Buffalo Bills. The fact is that he is one of Josh Allen‘s most trusted targets and it doesn’t look like that is going to change anytime soon. This week’s match-up against the Titans is as good as it comes. Sanders should have no problem outproducing his current week six ranking. Sanders is a high-end flex with plenty of upsides this week.

Waddle hasn’t really shown up so far this year, but I like his chances of doing so this week against the Jaguars. With his starting quarterback coming back from injury, and a lack of other receiving options, Waddle should be the number one or two option for the Dolphins this week. Waddle is a flex option with a low floor but a massive ceiling in week 6.

Patrick has been the picture of consistency so far this year. He always offers a safe floor and a decent ceiling on a regular basis. This week’s match-up against the Raiders is decent and Patrick should be able to produce another solid fantasy stat line. Patrick is a solid flex option in week 6.

Thielen’s past couple of performances have been underwhelming, to say the least. This wiki face is a decent opponent in the Carolina Panthers. Unless you are completely desperate, I would be working to play a different player with a higher floor and ceiling in week 6. Adam is a high-end flex with a safe floor but a limited ceiling.

Robinson could very well be the biggest bust at the wide receiver position this year. Usually known as a guy who is as stable as they come, that is not the case in 2021. Do you Chicago Bears are still ironing out the issues with having a rookie quarterback? Until we see Robinson have a better target share we should be feeding him. Robinson is a low-end flex with a limited ceiling in week 6.

Anderson has been one of the biggest disappointments this year and fantasy football, and I don’t see it changing this week. Even with a great matchup and a huge amount of targets, Anderson has not been able to produce. Anderson is purely a desperation flex in week 6. He offers a very low floor and a very low ceiling.

Noah’s fantasy output so far this year has been a roller coaster ride of ups and downs. He is still receiving a decent enough target share on a weekly basis to consider starting now. This week he faces a decent matchup against the Las Vegas Raiders. I like Noah’s chances at being a solid TE1 this week. He should offer a safe floor with solid upside in week 6.

Henry is the best tight end on the New England Patriots. Over the last two weeks, he has been receiving an uptick in his targets. If there is one receiving target on the patriots that I would bet on this week it is Henry. Henry is a high-end TE2 with an upside in week 6.

Arnold has been a pleasant surprise since joining the Jaguars. He won’t necessarily win you your week like adding Knox or Schultz would have but he is a viable streaming option when the matchup is right. This week’s matchup is sweet against the Dolphins team that is susceptible to the tight end position. If you need a streaming option with a good floor/ ceiling you could do worse than playing Arnold this week. He is a TE2 with upside against the Dolphins.

Cook’s production has been inconsistent so far this year. The fact is that he is not receiving enough targets per game to consider starting. Also, the fact that Donald Parham Jr has been receiving the red zone target is worrisome. Cook’s production solely relies upon whether or not he is the preferred red zone target on any given week. That being said it is too risky to start him until we see him have more consistent usage. Cook is a high-end TE2 with a safe floor but a limited ceiling in week 6.

And Robert has been mostly a bust so far this year. Last year we were spoiled with the number of touchdowns that he was scoring, and he was also receiving a larger target share in 2020. That is not the case this year, Robert is touchdown or bust going forward. He is a low-end TE2 whose floor is 0 and ceiling is directly related to whether or not he scores.

It seems as though that the 3rd passing option is entirely unreliable. Outside of Dalvin Cook and Justin Jefferson, there are no consistent/ reliable options for the time being and that includes Conklin. Conklin is purely a desperation play against a tough Panthers defense. Conklin is a mid-tier TE2 with limited upside.