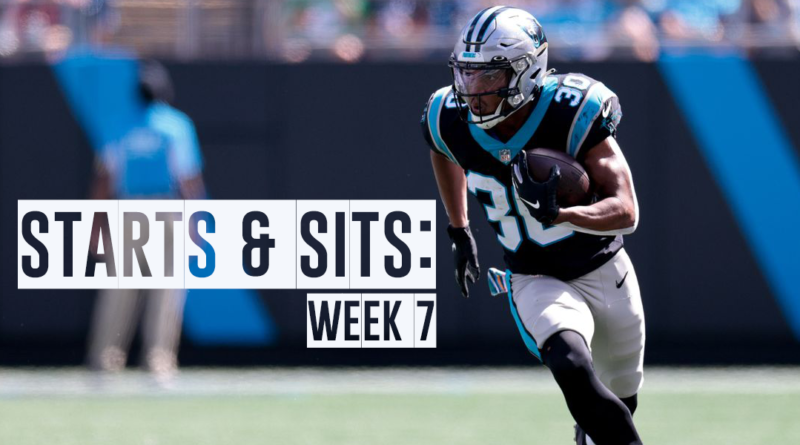 Week 7 is here, so we need to know who to start and who to sit. Our start/sit article is not going to discuss the obvious players who should always be played. We examine matchups and usage from week to week, which should give you the best chance at winning your weekly matchup. Good luck this week and don’t forget to not overthink it. Here are the Starts/ Sits for Week 7:

Ryan should be fresh coming off a bye week. The Falcons will also have their lead receiver in Calvin Ridley back in week 7 which should only help Ryan be even better going forward. Ryan has a good matchup against a Dolphins defense who have been exploited by offenses over the last few weeks. The same should happen for Ryan and the Falcons this week. Ryan is a high-end QB2 with solid upside in week 7.

Darnold has been a little disappointing over the last two weeks but this week’s matchup is too good to pass up. The New York Giants have been falling apart lately and that should only continue again this week against the Panthers. Darnold may not get rushing touchdowns as he had been but he is still a serviceable streaming option depending on the matchup. Darnold is a high-end QB2 with a solid floor and decent upside this week.

Wentz has been a solid QB2 with upside over the past two weeks. This week he faces a beatable 49ers defense. If you are in need of a streaming option this week, Wentz is a great option. Wentz is a mid-tier QB2 with a solid floor and ceiling in week 7.

You most likely don’t have to start Smith, but if you were contemplating it I would recommend that you don’t. The Seattle running game is a mess as Chris Carson and Alex Collins are dealing with injuries. That coupled with the fact that Geno really can’t get anything going makes me hesitant to start him going forward. The fact is that Geno’s upside is extremely low and so is his floor. I would look elsewhere for a streaming option in week 7. Geno is a low-end QB2 against the Saints this week.

The Giants offense as a whole has been a mess as of late and there is no end in sight. There are so many injuries in the organization that to go over them would fill this whole article. The fact is that Jones is playing against one of the better defenses in the league without his starting running back, multiple starting wide receivers, and possibly without his starting tight end. If there was ever a week to sit Jones it would be this one. He offers a very low floor and ceiling in week 7. Jones is a mid-tier QB2 that would regularly be a low-end QB2 with little upside if there weren’t so many byes this week.

Last week Taylor had an amazing matchup and couldn’t produce. This week’s matchup is nowhere near as good as the Kansas City Chiefs. The Packers have surprisingly been one of the better defenses this year. The other issues are the fact that both Terry Mclaurin and Antonio Gibson are coming into week 7 banged up. With limited weapons and a tough opponent, I do not see much upside for Heinicke coming into week 7. Heinicke is a low-end QB2 this week against the Packers.

Fournette has been a complete stud over the last two weeks and it doesn’t look like that is going to change this week against the Bears. The Tampa Bay Bucs know what they have in Fournette now and they will use him with confidence going forward. Fournette is a mid-tier RB1 with a top 5 upside this week.

Anyone who picked up Chuba off the waivers did not expect to have him as a starter this long but ultimately it paid off. McCaffrey is going to be out at least another two weeks, so until then, Chuba should remain in everyone’s lineups. This week’s matchup is juicy and Chuba should have no issue producing a solid fantasy day for his managers. In a week where there are so many teams on bye, Chuba slides in as a low-end RB1 in week 7. I believe if everything works out for him he has a top 5 ceiling this week against the Giants.

It is understandable why you wouldn’t be as high on Davis, especially with how Cordarelle Patterson has been such a stud so far this season. That doesn’t mean that Davis can not be a valuable fantasy asset going forward. In good matchups, Davis should still be seen as a low-end RB2/high-end flex. This week’s matchup against the Dolphins is exactly one of those matchups and I like Davis’ chances at getting into the endzone once again in week 7. Davis is a mid-tier RB2 in week 7.

With Chris Carson and Alex Collins both dealing with injuries, the Seahawks backfield is a complete mess. The fact is that this has the real ability to be a running back by committee as long as Carson and Collins are out. Your guess is as good as mine as to which running will have the most success this week. The matchup against the Saints is tough which makes starting a Seahawks running back even harder. If you can avoid it, I would. Hopefully, you have an option that will have a higher floor and ceiling in week 7.

The number of carries that Ingram has been receiving is definitely surprising but as you have seen his number of carries does not translate into fantasy success. This week’s matchup against the Cardinals is not sublime. The fact is that the Cardinals should be in the lead for most of the game which hurts Ingram’s chances at succeeding. Ingram is nothing more than a flex play this week. He offers a safe floor but very little upside.

Drake had an amazing fantasy day last week but I would not bet on him doing that on a regular basis. Especially since his two touchdowns came off of 4 carries and 2 receptions. I would bet on this week being a Josh Jacobs feast day which is why I would leave Drake on the bench this week against the Eagles. Drake is nothing more than a desperation flex in week 7.

If Shepard plays this week, he is automatically the number one receiving option for the Giants. We have seen him have great success in the past when everyone was injured and this week looks like one of those times as well. Shepard is a solid WR2 with great upside, especially in PPR leagues.

With TY Hilton out due to injury, Pittman should once again receive the large target share he had been receiving the past couple of weeks. The matchup against the Niners is decent and the Colts will almost certainly need to rely on the passing game to stay in the game. Pittman is a low-end WR2 this week with an upside to outperform his current ranking.

Since Higgins returned from injury, Boyd’s usage has gone down greatly. This week the Bengals face a tough opponent in the Ravens which means that targets will be even harder to come by. With a low target share and a tough matchup, I am avoiding starting Boyd in week 7.

Crowder has been receiving a decent target share as of late, but this week’s matchup against a tough Patriots defense makes it hard to be able to rely upon Crowder.  This week’s matchup also has the chance to be a very low-scoring affair, so the upside for both teams could be ultimately capped. Crowder is a low-end flex with limited upside in week 7.

Jefferson has shown that he is purely a boom/bust kind of play on a weekly basis with the bust side being more consistent, unfortunately. This week the Rams face a bottom 5 Detroit Lions defense in which the Rams should be in the lead for the majority of the game. This ultimately means if Jefferson doesn’t score early he could very well have another lackluster day. Jefferson is a low-end flex this week against the Lions.

RSJ has been solid since taking over for the injured Logan Thomas. As long as he is healthy he should offer streaming ability, especially in full PPR leagues as he is receiving a decent target share. RSJ should once again be one of the top targets for Heinicke this week against the Packers. RSJ is a high-end TE2 with decent upside in week 7.

As an Eagles fan, it hurts seeing Ertz in a Cardinals jersey but I wish him all the best. The good news is that Ertz is now the TE1 for a team that has been performing at a very high level all season. Ertz should have no problem fitting right in and becoming a security blanket of sorts for Kyler Murray. Ertz should be a high-end TE2 with upside this week against a poor Texans defense.

Mo has been a great fantasy asset for those who have started him over the last three weeks. He is turning into one of Wentz’s go-to targets in the red zone, which makes sense because he is 6’5”. This week’s matchup has the ability to turn into a high-scoring matchup which gives me even more confidence that Mo will find the endzone again. Mo is a high-end TE 2 with upside in week 7.

Engram has been disappointing for a while now and this week shouldn’t be any different. If Engram plays, he offers very little upside. Even without a majority of the offensive weapons being available, he is still putting up very pedestrian numbers. Engram is currently ranked as a mid-tier TE2. He offers a low floor and a very low ceiling this week against the Panthers.

Tonyan has been a complete bust this year especially for where he was drafted. The only time I would consider starting him is when there is the potential for a high-scoring matchup, this week against the Washington Football team is not one of those matchups. Tonyan should be considered a boom/bust for the rest of the season. He offers a basement floor and very little ceiling unless he finds his way into the endzone. Tonyan is a mid-tier TE2 purely because of the bye week situation. He should be on your bench/waivers in week 7.

Firsker should have been fantasy-relevant for most of this year but it just hasn’t happened. Even when Julio Jones and AJ Brown were out, Firkser did not really perform any better. This week’s matchup should be a high-scoring affair but it doesn’t mean that everyone is going to eat. There are plenty of tight ends out there that offer a better floor and ceiling than Firkser. Firkser is a low-end TE 2 in week 7.