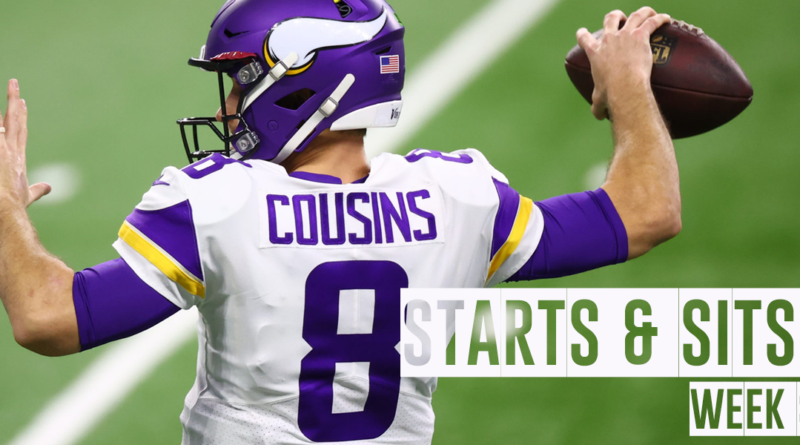 Week 8 is here, so we need to know who to start and who to sit. Our start/sit article is not going to discuss the obvious players who should always be played. We examine matchups and usage from week to week, which should give you the best chance at winning your weekly matchup. Good luck this week and don’t forget to not overthink it. Here are the Starts/ Sits for Week 8:

I will never doubt Jones again because just when I think he is on the road to failure, he completely proves me wrong. Jones is not a consistent QB but he does offer a solid floor most weeks and a massive ceiling. This week’s matchup is as good as it gets. The Kansas City Chiefs defense has been horrible as of late and they don’t look like they are going to be any better this week against the Giants. If you are in need of a streaming option Jones offers the perfect combination of risk/ reward that you would want in week 8. Jones is a high-end QB2 with upside in week 8.

Cousins hasn’t been as good as he should have been so far this year but that doesn’t mean that he isn’t a serviceable streaming QB depending on the matchup. Cousins is fresh coming off of his bye and he comes into a matchup that has a high chance of being a high-scoring affair. As we know Cousins is surrounded by talent, the real question is whether or not he will be successful this week. The answer is yes. My reasoning is that the Cowboys present a major challenge and should be able to score on the Vikings often. This means Cousins will most likely have to rely on the passing game to keep the Vikings in the game. Cousins is a low-end QB1 with upside.

Wentz has been nothing short of amazing over the last two weeks. Especially since he is most likely coming off your waiver wire in week 8. Wentz does not offer week-winning upside but what he does off is a solid floor and a high enough ceiling to be a streamable asset. Wentz is surrounded by talent and you can tell he is getting comfortable in Indy. If you need a streaming QB this week, Wentz is as safe as they come. Wentz is a mid-tier QB2 with great upside this week against the Titans,

This is not to say that Tua hasn’t been great the past two weeks, this is all about how good the Bills defense has been. The Bills team as a whole has been great and they offer serious challenges to every team/QB that they play. This is no different against the Dolphins this week. There is a real chance that the Bills completely control this whole game and limit any/all upside that Tua could have. Tua is a low old end QB2 with a capped ceiling.

Winston may not be the same Jameis that he was with Tampa Bay, but that doesn’t mean that he is good or consistent either. Outside of Alvin Kamara, the Saints offense is a mess. This week the Saints face a Bucs defense that is playing at a high level even without their starting defensive backs. Ultimately I don’t even have confidence in Winston if the matchup was good either. Jameis is a mid-tier QB2 with boom/bust potential in week 8.

Jones has consistently gotten better as the season continues. The fact is that the Chargers will present more of a challenge for Jones than he necessarily has seen so far this year. This should not be a situation where the Patriots are leading by a massive amount of points throughout most of the game. This matchup should be neck and neck and could very well be a modest scoring game. I would look for someone with a higher ceiling in week 8. Jones is a low-end QB2 with limited upside this week.

Harris has been receiving a great workload in New England which has resulted in him being an RB2 with upside for the past couple of weeks. This week is no different as the matchup against the Chargers is favorable for the running back position. Harris should continue to be the lead guy for the Patriots and should remain in your starting roster for the foreseeable future. Harris is a low-end RB1 with an upside in week 8.

Moss has been a lot better this year than I thought he was going to be. Although both running backs are being used in Buffalo, I lean on Moss being the better of the two this week against Miami. There is a good chance that the Bills will be in control of this game, which should allow them to utilize the run game to run out the clock. Moss is a high-end flex with upside in week 8.

Gainwell is the next man up for the Philadelphia Eagles and it couldn’t come at a better time. The Detroit Lions are one of the best matchups for opposing running backs in 2021. Before Miles Sanders injury it looked as though the Eagles were going to finally start utilizing the run game. Gainwell had already shown his ability in the passing game prior to week 8. So the combination of the lead role and his pass-catching ability gives him a solid bump in production in week 8. Gainwell is a high-end flex with upside, especially in PPR leagues.

Carter has been a solid flex play in his last couple of matchups. He has consistently been getting more snaps throughout the weeks and there has been more productive. The Jets as a whole are in a rough spot though as they now are without their starting QB and possibly without their starting wide receiver in week 8. The Bengals defense has also been playing a lot better this year which is another reason why I am concerned about Carter’s upside in week 8. Carter is a flex play in week 8 with a low floor and a capped ceiling.

Davis looked plain old bad last week against what should have been a good matchup against the Miami Dolphins. This week’s matchup is on the other side of the spectrum as the Carolina Panthers are one of the top defenses against the run in 2021. This is just not a week that you would want to gamble on Davis getting into the endzone. Davis is a flex play with limited upside in week 8.

I know what you’re thinking this 3 headed monster just turned into a 2 headed monster, so there must be an upside for Johnson and Lindsay right? Wrong. The fact is that even when Ingram was receiving a full workload he was not able to produce for fantasy in most weeks. This situation is no better as now there are 2 running backs who are going to share in the workload, which will limit both of their upsides. This week’s matchup against a solid Rams D also makes me hesitant to start either running back. Both running backs are low-end flex plays with limited upside in week 8.

Sanders has been as solid as you’d want a WR to be, especially considering he was most likely picked up off of your waivers. The matchup this week against the Dolphins is too good to pass up. The Bills should be able to slice and dice the Dolphins defense with ease and Sanders should be one of the top players to reap the rewards. Sanders is a high-end flex with great upside this week.

Shepard has been dealing with injuries for several weeks now but it looks like he should be back for this sweet matchup against a horrible Kansas City defense. When healthy Shepard has been great, especially in PPR leagues. If he plays Shepard should be in your lineups. He is a solid flex play with upside in week 8.

Shenault hasn’t necessarily been the picture of consistency so far this season but I project things could get better going forward. Shenault has a great matchup this week against a subpar Seahawks defense. Shenault offers a solid floor and a decent ceiling this week. He is a flex with upside in week 8.

Things have been rough for the Houston Texans and that includes Brandin Cooks. Although he is receiving a huge target share, the fact is that it is not enough to guarantee him great production on a weekly basis. That included with the fact that the Texans have a hard matchup against the Rams makes me feel perfectly fine benching him in week 8. Cooks is a high-end flex with a limited ceiling and a low floor in week 8.

It just hasn’t been Boyd’s year. With how Ja’marr Chase has been playing lately it is understandable why Boyd has been able to produce on a consistent basis. The fact is that Boyd is probably the 4th-5th target after Chase, Higgins, Mixon, and possibly Uzomah at this point. It would probably take an injury to one of the top two receivers for Boyd to be trusted again from a fantasy perspective. Boyd is a low-end flex with a low upside in week 8.

Meyers has been decent this year but as we all know he offered zero chances of getting touchdowns. Now that may change in the future but I don’t see it happening against a solid Chargers defense. The fact is that Meyers can have success but he also offers a low floor if things don’t go his way. I would expect that his floor will be safe this week but his upside could be very low. Meyers is a low-end flex in week 8.

Engram received a decent target share this past week and has a good chance of doing so this week against the Kansas City Chiefs. This week’s matchup should be an offensive affair for both sides which leaves plenty of upside for Engram and the Giants. Engram is a mid-tier TE2 with upside in week 8.

Conklin may be a little risky this week but ultimately it could work out for those that decided to roll the dice on Conklin this week. This matchup should be a high-scoring affair which means that the 3rd/4th passing options for the Vikings may very well have a good fantasy day. If you are in need of an upside play at the tight end position, you could do worse than Conklin this week. He is a TE2 with boom/bust upside.

Being able to guess Cook’s production is extremely difficult as he has had great weeks and terrible weeks. It really all depends on if he is Herbert’s red zone target that week or not, knowing that is basically like flipping a coin. The fact is that Cook is unreliable and I would prefer to use someone with a higher ceiling until we see Cook perform at a higher level on a consistent basis. Cook is a high-end TE2 who is touchdown or bust.

Uzomah is hit or miss in fantasy football as he either explodes or has barely any production. The issue with this week is that the New York Jets don’t really present much of a challenge for the Bengals. If Uzomah doesn’t get a touchdown early then he could very well be a low-scoring option at the tight end position. Uzomah is a boom/bust TE2 in week 8.

Mo has been a serviceable tight end as of late as he has gotten into the endzone or had a decent enough stat line the last couple of weeks. My belief is that this matchup is going to be very run-heavy, which might hurt Mo’s chances at getting into the endzone this week.  Mo is a risky play against the Titans this week. He is a low-end TE2 in week 8.