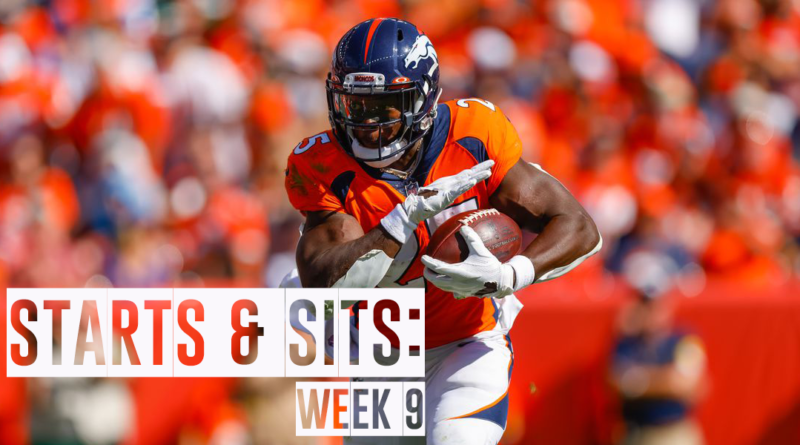 Week 9 is here, so we need to know who to start and who to sit. Our start/sit article is not going to discuss the obvious players who should always be played. We examine matchups and usage from week to week, which should give you the best chance at winning your weekly matchup. Good luck this week and don’t forget to not overthink it. Here are the Starts/ Sits for Week 9:

When it comes to streaming quarterbacks Carson Wentz has been as solid as they come over the last three weeks. This week he comes into a Thursday matchup against a bottom 5 Jets defense. If you are in need of a streaming option that is available off of the waivers, I would consider starting Carson in week nine. Carson is a high-end QB2 with an upside.

Tua is a great play this week against a horrible Texans defense that bleeds points to the opposing team’s offenses. This should be a great start day for most of Miami’s offensive weapons. Tua should have a solid day this week. He is a high-end QB2 with a great floor and decent ceiling.

If Hill plays this week, he should once again be a high-end QB2 with QB1 upside. He had enough talent surrounding him and should be able to utilize his legs to let him have even more success going forward. Hill is a mid-tier QB2 this week with great upside against the Falcons.

Coming into the season I thought that Matt Ryan was going to be one of the best values at the quarterback position. Unfortunately, that has not come to fruition so far in 2021. The Falcons are now without their leading wide receiver,  and there is no timetable as to when he will be back. This week’s matchup against the Saints is also not desirable for a streaming option. I would look elsewhere for a quarterback with a higher floor and ceiling. Ryan is a mid-tier QB2 with limited upside in week 9.

Lawrence has shown ability in certain matchups, this week against the Buffalo Bills is not going to be one of them. The Buffalo Bills are one of the best, if not the best defense in the league. They should be able to control most of the game and should truly limit Lawrence’s upside in week 9. Lawrence is a QB2 with a low ceiling/ limited floor this week against the Bills.

Fields looked great last week, as he was able to utilize his legs and rack up a bunch of rushing yards. This week’s match-up against the Pittsburgh Steelers does not offer as much upside as Fields had last week. The Steelers should be able to keep the Bears under wraps, which limits what Fields is able to do through the run game. Fields is a low-end QB2 with a low floor and a low ceiling in week 9.

To my surprise, Gordon has held onto his job as the starting running back for the Denver Broncos. This week’s matchup against the Cowboys is decent and if I had to bet on one of the Broncos players ending up in the end zone it would be Gordon. He has a solid rapport with Bridgewater and that should continue throughout this season as long as he remains healthy. Gordon is a low-end RB2 with upside in week 9.

Keep an eye to see if Murray plays, but if he does he is a great play against the Vikings this week. The Ravens are fresh off a bye and this matchup against the Vikings should be able to be a decently high-scoring matchup. If you are in need of a solid flex play with upside, then Murray is your guy.

Moss hasn’t been great but he has offered those who started him a solid floor on a weekly basis. This week’s matchup is as good as it gets for running backs. The Bills should be in the lead for the majority of the game which should allow plenty of time for Moss to run out the clock. Moss is a low-end RB2 with upside in week 9.

Hyde should very well be the lead back against the Bills this week but that doesn’t mean that I am excited. The Bills have been one of the best defenses so far this year and should also be in the lead for most of this game. This means the Jaguars will most likely have to air out the ball to try to stay in the game. Hyde ceiling is ultimately capped due to this, which is why he is ranked so low this week. Hyde is a low-end flex in week 9. He offers a safe floor but barely any upside.

Davis has been subpar since the Falcons came back from their bye. The fact is that he is no longer the RB1 for his team and is not being relied upon to get the first down either. The Falcons are down a receiver so they may have to rely upon the run game a little more in the future but this is not the week where I’d bet on it. The Saints have been solid against the run and they should be able to limit most of the Falcons offensive upside. Davis is a flex play with a limited ceiling in week 9.

There is truly not one running back that I would want to play right now as they are all splitting the workload that was left by Mark Ingram. The fact is that Johnson is still the most talented but that does not say much when you are playing for such a lackluster team. Johnson is nothing more than a low-end flex going forward until we see him have better usage.

Parker looked great last week. This week the Dolphins are playing against one of the worst defenses in the Houston Texans. They should have no problem putting up a ton of points this week, which is why I am very confident in starting Parker in week 9. Parker is a high-end flex with upside this week against the Texans.

Since returning from injury Crowder has been a viable flex play most weeks. Crowder has always been known as a PPR machine and that isn’t changing this week against the Colts. The Jets are most likely going to be without Corey Davis, which should leave Crowder as the main beneficiary. Crowder should receive enough targets in week 9 to warrant being started. He is a mid-tier flex with upside, especially in PPR leagues.

Renfrow is now the WR1 for the Raiders. He has been the most consistent of all the Raiders receivers thus far and that should continue going forward as he has the best relationship with Derek Carr. Renfrow is especially valuable in PPR leagues as he receives a large target share on a weekly basis. The Raiders have a great matchup against the Giants. I believe this week’s matchup can turn out to be a high-scoring affair between two offenses that can produce and two defenses that are less than average. Renfrow is a flex with solid upside in week 9.

If there is one word to describe Meyers production in 2021 it would just be “Eh”. On a weekly basis, he offers an okay floor but barely provides any ceiling for his fantasy managers. This week’s matchup against the Panthers could very well turn into a very low-scoring affair, so leaning on Meyers as anything other than a mediocre flex play could leave you disappointed. Meyers is a low-end flex play in week 9.

Mooney is the best WR on his team but that doesn’t mean that he will have success on a regular basis. This week’s matchup against the Steelers should prove to be difficult for the Bears in general. If you have a better option with a higher floor and ceiling, I would look to start them over Mooney this week. Mooney is a flex play with a limited ceiling in week 9.

Laviska has just been a plain old disappointment in 2021. I was really hoping that Laviska would be able to perform at a high level this year but that has not been the case. Even with D.J. Chark being out, Laviska still wasn’t able to separate himself from the other wide receivers on the team. Going forward Laviska is going to be merely a desperation flex.

Arnold looked great last week as he is turning into one of Trevor Lawrence’s most trusted targets. This week’s matchup is not sublime but I feel that if any Jaguar can perform this week it will be Arnold. Arnold is a high-end TE2 with great upside, especially in full PPR leagues.

Conklin isn’t a top-tier tight end but he does offer more upside than most tight ends that were available on the waiver wire in week 9. Similar to Arnold, Conklin isn’t reliant upon touchdowns as he is receiving enough targets per game to have decent production on a weekly basis. This week’s matchup against the Ravens is actually really good for tight ends which only makes me more confident in starting Conklin. He is a Mid-tier TE2 with solid upside in week 9.

If Engram didn’t receive that touchdown last week we might not be talking about him as a start this week, but he did. The Giants are dealing with a good amount of injuries this week, which means that Engram should once again receive a decent target share. It is also a good matchup against the Raiders in week 9. Engram is a mid-tier TE2 with upside in week 9, especially in PPR.

Uzomah just isn’t a consistent option at the tight end position. He has these amazing TE1 type games and then follows them up with TE3 type games. It is hard to know when he is going to perform or when he is going to be a disappointment. This is why I am fading Uzomah going forward unless the matchup is too good to pass up. This week against the Browns is not one of those matchups. Uzomah is a high-end TE2 with an extremely low floor in week 9.

Cook just hasn’t had the type of production that we would want from our starting tight end. He has an alright target share but doesn’t do much with it and does not offer consistent touchdown upside either. Cook is a high-end TE2 with limited upside in week 12. If you need a high floor play I would look elsewhere.

Mo had been good for a couple of weeks but as we have seen if he doesn’t receive a touchdown, he doesn’t offer much upside. This week the Colts have a good matchup but I believe that this week will be a very run-heavy game as the Colts should be in control for most of the game. Mo is a boom/bust option at the tight end position. He offers a very low floor in week 9.