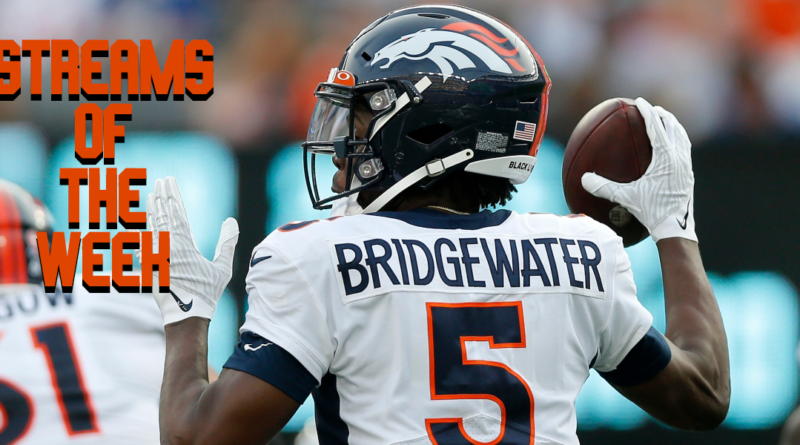 It’s already week three in the season and injuries are starting to hit everyone hard. No worries. I’m here to provide you with some streaming options that will get you out of a jam this week. Let’s take a look:

Teddy Bridgewater-The Jets have struggled to contain opponents so far this year(shocking). In addition to this, Bridgewater has been a very productive passer this season. This development has been a pleasant surprise to many fantasy managers as it gives us an extra streaming option.

Kirk Cousins- Cousins has scored 23.04 and 27.26 respectively in the first two weeks of the season. He is kind of flying under the radar and is a great streaming option this week against the Seahawks, which I predict to be somewhat of a shootout.

Jimmy Garrapolo- Garrapolo hasn’t been as good as the previous two quarterbacks but he will do in a pinch. In what I suspect to be another shootout against Green Bay, I would gamble on Jimmy G to put up big points in week 3.

Trenton Cannon/Jacques Patrick-  Whomst!?  These are two of the three healthy running backs on the SF rosters and Trey Sermon(who is also dealing with a minor injury). If your back is up against the wall and you need some potential, I would grab one of these guys. It’s risky, but the volume will be there for one of them.

JD McKissic- This stream is recommended for PPR leagues. McKissic excels as a pass-catching back. I look for Washington to be trailing the Bills for most of this game and primarily being in catch-up mode, which leads to quite a bit of work for McKissic.

Kenneth Gainwell- Gainwell has the perfect name for a running back. He is also beginning to carve out a pass-catching role in the Eagles backfield. In addition to this, Miles Sanders is dealing with an injury so he may submit some of his workload onto Gainwell.

Sammy Watkins-  The targets have been there for Sammy with 8 in week 1 and 7 in week 2. He seems to be somewhat of a possession receiver for Lamar Jackson.

Darnell Mooney-  Mooney has grasped the number 2 pass-catching role on the Bears. He has received his fair share of targets in the first two weeks of the seasons. This option becomes especially intriguing if Fields plays over Dalton due to injury.

Quintez Cephus- Behind Hockenson, Cephus has become the primary pass-catcher on the Lions and one of Goff’s favorite targets through 2 weeks. The arrow is pointing up on this guy, so grab him while you can because he may be a season-long acquisition.

Jared Cook- Cook is known to have dominating games here and there. Besides that, he has been somewhat consistent thus far. Herbert is a straight stud so it is worth the gamble to play one of his weapons if you’re in a tight spot.

Jack Doyle- This guy is still in the league right?  Yes, yes he is. Doyle has a respectable Week 2 outing. He seems to be getting the attention of Wentz. He is a great safety blanket for a quarterback in a new system and is a big target in the red zone.

Dawson Knox-  Knox isn’t someone you should expect a huge game from, but if you need 8-12 points out of your tight end then he should be a good option.

Arizona- The Cardinals may be snatched up by now but they were available in a few of my leagues so I figured I’d mention them. They have a matchup with rookie quarterback Trevor Lawrence. The Jags are going through some growing pains right now and are susceptible to turnovers.

Denver-  The Broncos play the Jets this week. I don’t think I need to go into too much detail here. As a manager who streams defenses every year, I tend to follow the Jets opponents almost weekly.
New England- This one of iffy but I like to risk it. The Patriots could do very well in this matchup. It all depends on which version of Jameis Winston shows up.