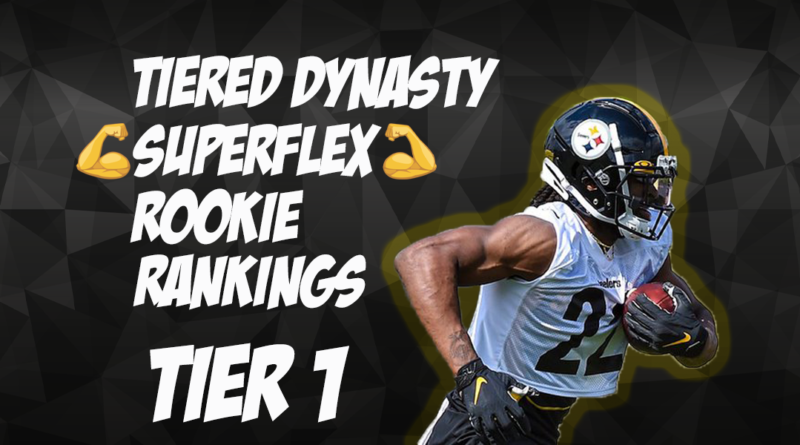 2. Trey Lance– Lance is much rawer of a prospect than the other QB’s in this class, however, he landed in the best possible scenario of the bunch. He will be working under offensive guru Kyle Shanahan on a team with dynamic weapons and a stellar offensive line. Lance also possesses the strongest arm of the bunch and has serious rushing upside.

3. Justin Fields– I couldn’t be more excited with this pick as a Bears fan, Fields should win the starting job early on in the season and also provide excellent rushing potential at the quarterback position. He was the number 2 QB in this class for the entirety of his collegiate career and will look to prove doubters wrong at the next level.

4. Kyle Pitts– This may be considered a hot take, but in my personal opinion elite tight ends are the scarcest players in fantasy football. Landing the best tight end prospect ever should provide an outstanding positional advantage for many years to come. I would not fault anyone for taking Zach Wilson, Jamarr Chase, or any of the running backs depending on individual team need with that being said.

5. Zach Wilson– Wilson ascended higher than any other player this NFL draft and ended up leap-frogging Fields as a surprise to many. Wilson does not have the rushing upside the first 3 quarterbacks do, but he is mobile enough to have production with his legs. He is definitely worth the price tag in Superflex.

6. Jamarr Chase– If you saw my previous article or follow me on Twitter, you would know I am the ultimate Rashod Bateman hype beast, and even had him ranked as wideout 1 predraft. Chase reuniting with Burrow has flipped them in my ranks with that being said. The only issue I see arising is volume concerns with 2 other good receivers on the Bengals already.

7. Travis Etienne– I believe everyone overreacted with Etienne’s landing spot in Jacksonville. Yes, James Robinson will eat into some early-down carries and goal-line work, however, Etienne’s explosiveness and receiving ability do not require him to have 20+ touches a game to be a stud. The new regime under Urban Meyer spent first-round capital on him for a reason and he will be operating with a very familiar face at quarterback. Do not let him fall far in your rookie drafts.

8. Javonte Williams– To me there are 3 top-tier running backs in this class, Williams may be a hot take above Harris, however, he just turned 21 so his value will retain better over time in dynasty as long as production is similar. Melvin Gordon is a free agent next year so Javonte should have every down work in 2022.

9. Najee Harris– Most people’s consensus RB1 after landing in Pittsburgh and receiving first-round capital, Najee profiles as an every-down back with a complete skill set and limited competition. I however do not like the fact he is already 23 years of age and lacks high-end speed. His tape looked utterly dominant behind an elite Alabama offensive line. This will not be the case at all in Pittsburgh and will most likely lead to inefficiency for Najee. I do expect the full workload to be there and fantasy production will come along with that. In redraft, he is my RB1.

10. Rashod Bateman– Bateman looks to be the clear-cut top dog in Baltimore, he should have no problem dominating the target share and is my favorite to outproduce Chase. The only issue is the lack of throwing volume with Lamar, either way, Bateman should provide an excellent target with a near-flawless game.

11. Devonta Smith– I had Smith ranked at wideout 4 in my predraft rankings, but the landing spot has boosted him above Waddle for me. Philly had a glaring need at receiver even after taking Jalen Reagor in the first-round last year. I still believe in Reagor’s long-term potential, but Smith shouldn’t have too many issues being the passing focal point.

12. Jalen Waddle– The speed demon Waddle will be reunited with his college quarterback Tua in Miami and should have a solid shot at taking over as the top receiver with that connection. The only reason he is behind Smith for me is that the fins chose to bring in Will Fuller which will eat into his target share along with the other receiving options they have.

13. Rondale Moore– Moore will provide Kyler Murray with yet another dynamic speed demon to throw to in the high-powered Arizona offense. I think he will have no trouble cementing himself as the clear wide receiver 2 in that offense. Playing opposite D Hop will leave him in single coverage frequently and give him a great opportunity to showcase his athleticism.

14. Mac Jones– The final player in tier one, Jones is without a doubt the least talented of the bunch, however, this is Superflex we are talking about, so the opportunity for a starting quarterback cannot be passed upon. If the Pats can add someone talented for Jones to throw to in the upcoming years, he has the opportunity to be a steal in the late first or early second of rookie drafts.

Please check back later this week for the Tier 2 article, in the meantime follow me on Twitter at @acltearer and the podcast @TheHateful8FF.