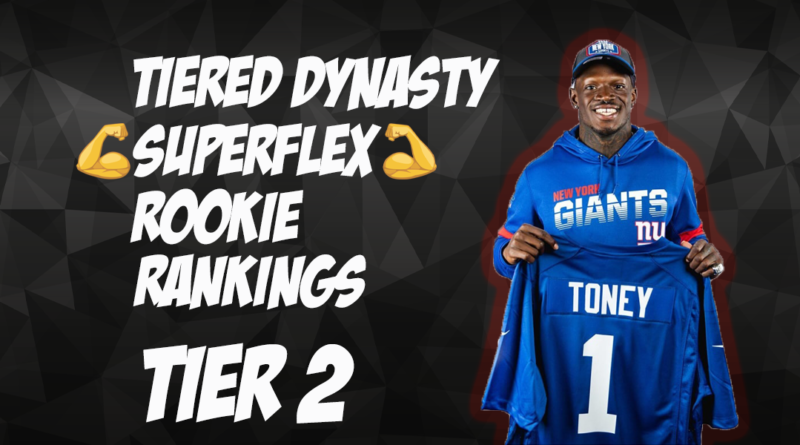 Elijah Moore- A recent favorite of the dynasty community, many would argue for him to be in tier one given my criteria. I must admit it is hard to keep him out but as well as he may profile, we have to see how good Zach Wilson is first. The Jets also paid big money to Corey Davis, have another solid young receiver in Mims, and an underrated slot in Crowder who will heavily eat into Moore’s Playing time unless cut. None the less if Moore can establish a good connection with Wilson, we may see a great value pick here in the second round of rookie drafts.

Kadarius Toney- One of my personal favorites in the rookie class, Toney profiles as an absolute YAC monster, with 1st  round capital. The only issue is the landing spot with Giants. They recently signed star Kenny Golladay and still have Darius Slayton and Sterling Shepard on the roster. The biggest issue however is Daniel Jones throwing them the ball. Toney has received a lot of unwarranted hate from what I have seen on Twitter, if he falls to the late 2nd round in rookie drafts don’t hesitate to snatch him up. There are absolutely no reasons receivers drafted in the 3rd and 4th round should go ahead of him.

Michael Carter- Another player I am higher on than most of the community, Carter is an elite pass catcher who will almost certainly take over the 3rd down role for the Jets immediately. I have seen CEH comparisons for him and all of a sudden people are out because of the landing spot and lack of capital.  He is in my opinion the most talented back on the roster and although being a 4th rounder isn’t ideal, he still should get the volume right away.

Terrace Marshall Jr.- Marshall is a big-bodied wideout who tested very well and has some very good hands. I am not as high on him as others because the competition he will face for targets will be immense. The Panthers have D.J. Moore and Robby Anderson, who finished in the top 24 for the position last year. With McCaffrey coming back, there are far too many mouths to feed in the passing game to my liking. If Marshall has a slow start, he is a buy-low candidate, with Robby Anderson potentially leaving in free agency next season.

Dyami Brown- A player I loved pre-draft, Dyami Brown is a high-level separator and someone who plays a lot bigger than he is. He can go up and get it better than someone his size should be able to. Dyami was drafted in the 3rd round by the WFT which is not the best landing spot. They did bring in Fitzpatrick who is known to fearlessly throw the ball, but Dyami has some serious competition for targets with Terry Mclaurin and Curtis Samuel already on the roster. The volume will not be great early in his career.

Trey Sermon- For me Sermon is the most overhyped rookie at this moment in time. I saw him drafted at pick 14 in one of my leagues and almost threw up. In this case, people are buying into the landing spot and capital far too heavily, driving his price through the roof. The 49ers have a prolific run game, but that doesn’t change the fact that it will be a multi-man committee for the foreseeable future. I would be blown away if Sermon was anything more than the 3rd back on the depth chart for the 49ers barring injuries. If you are in dire straits for running back help, I can understand swinging for him in the mid to late second round but be warned this reminds me far too much of the Keshawn Vaughn situation from last year. Don’t go chasing waterfalls as TLC would say.

Amon-Ra St. Brown- If we were going off names alone Amon-Ra would be the consensus 1.01 in the class. All jokes aside, he projects to be one of the focal points for the horrific-looking Detroit Lions offense. This is somewhat good news for Amon-Ra as the volume should be fairly high compared to the rest of the rookies and the Lions should be chasing games frequently.  He was a decent prospect coming out of USC and it was fairly surprising to see him fall to the 4th round. Problems may arise in the future if/when the Lions look to add more receivers.

Pat Freiermuth- After being selected in the 2nd round by the Steelers, Freiermuth solidified himself as the tight end 2 in this rookie class. It is very rare tight ends produce early in their careers, but he should get some decent playing time with his complete skill set. Big Ben is getting very old and Eric Ebron along with the multitude of talented receivers in Pittsburgh will take away from his targets, but Pat is good enough of a prospect to be worth an early 3rd in non-tight end premium leagues.

Nico Collins- A big-bodied receiver who opted out for Michigan this past season, Collins landed on the Texans in 3rd round. He is a classic possession receiver and a giant target for Watson if he stays. Collins also ran a 4.43 forty on his pro day which boosted his stock massively. He should slot in the opposite of Brandon Cooks immediately. (rising in my rankings daily)

Please check back at last week’s article for Tier 1, in the meantime follow me on Twitter at @acltearer and the podcast @TheHateful8FF.