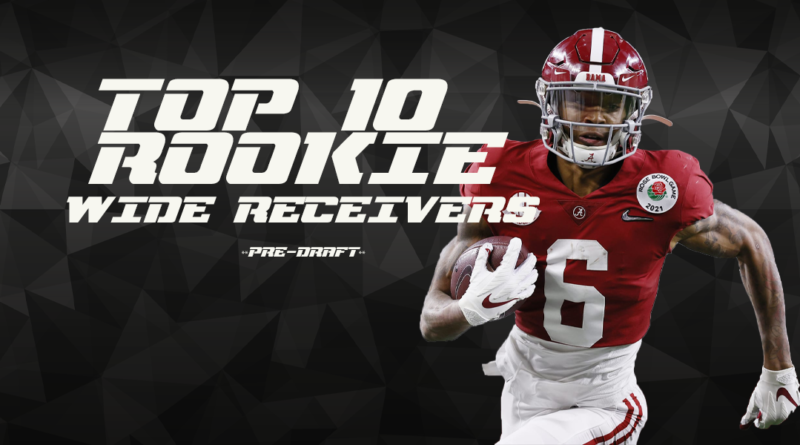 I know I know the hot take of the year, not Ja’Marr Chase or Heisman winner Devonta Smith. You heard it here first, Rashod Bateman is the most polished and NFL-ready receiver in the very stacked 2021 class. Bateman is hands down the best route runner I have seen in my film study thus far. He has a solid frame and very strong hands which support his ability to get physical, but his ticket to NFL success most definitely lies in the separation he creates with his route running and the absolute lack of flaws in his game. The only weakness I can find for Bateman is he may not be the most explosive player of all time (although he does claim a sub 4.4 forty time).

Bateman has had consistently high college dominator ratings, even while playing alongside NFL receiver Tyler Johnson. He also boasts a breakout age of 18.8 which screams future stud. With all this taken into account, Bateman has the makings of a true wide receiver one at the next level and will be any quarterback’s dream target.

Probably the consensus wide receiver one in this draft class, Chase was utterly dominant during his time at LSU, breaking records in the 19-20 season before opting out this past year. He outshined star NFL rookie and teammate Justin Jefferson, which has led many to believe he is a guaranteed Pro Bowler at the next level. This is very hard to argue against in all honesty. Chase has a solid breakout age of 19.5 and just turned 21 so he is one of the younger prospects in the draft. Although he doesn’t have the biggest frame, Chase is built like a running back and attacks the ball at the catch point. He has some of the best hands in the class and is a high-level athlete with a strong YAC ability to go along with elite separation.

Some minor concerns with Chase are his inconsistent route running, and the fact he’s been away from football for a full year (opted out). He also used his strength to bully his way open very frequently. This will be much harder to do at the next level, however, his talent is undeniable, and I strongly believe he will live up to the hype. If he lands on the Bengal’s with his former QB Burrow, I think Chase will have to jump Bateman in my ranks.

Perhaps another surprise with the Heisman winner yet to appear, his teammate Waddle makes the cut just barely. It is no secret that Waddle’s injury was one of the key factors to Devonta Smiths Heisman winning campaign. A healthy Waddle almost certainly takes the prestigious award away from him.

Onto the man himself, Waddle possesses game-breaking speed with an expected sub 4.3 forty time. But he is not just a burner. His YAC ability is elite and has some very solid hands. I expect him to have very high draft capital (top 15 players) and be the primary target whatever team he lands on. The biggest issues with Waddle are his injury concerns, small size, and lack of elite college production. The latter is mainly the result of him going to Alabama with multiple other NFL-caliber receivers. People will throw the Henry Ruggs comp out there, and while I do believe they have similar speed, I think Waddle is the superior prospect as a whole. If Waddle can get a decent target share, he will produce and become a pro bowl caliber player.

Devonta Smith is one of if not the biggest enigmas in this year’s draft for me. On one hand, he won the Heisman as a wide receiver and dominated tough SEC competition looking untouchable. On the other, Smith is built like a 12-year-old, is not the best athlete, and will be nearly 23 at the start of the NFL season. It is extremely hard for me to make up my mind with him.

Smith has probably the best footwork in the entire class and is one of the better route runners, he also is extremely agile with reliable hands and had the best production apart from Ja’Marr Chase. However, at the next level, every corner he is going to face will outweigh him by 20-40 pounds and most likely be faster as well. I do think his footwork and quickness will allow for him to get open frequently, but the transition will not be easy. I fully expect him to get bullied throughout his rookie year, but if he has the right mentality and toughness, we may have a future hall of famer on our hands.

Rondale Moore is the first player in my 2nd tier of wideouts for the 2021 class, and he should feel very unlucky not to squeeze into the 1st. Moore is an absolute burner in a compact bowling ball-like frame. He posted a vertical of 42.5 inches, has 4.3 speed, and can squat 600 pounds. He has the youngest breakout age in the class at 18.2 years and still has yet to turn 21. I would put him with Ja’Marr Chase and Kadarius Toney as the best YAC guys in the class. His change of direction is phenomenal, and his stocky frame makes him extremely difficult to bring down.

The issues with Moore mostly center around his height, and some injury history in college. He played in the slot for Purdue and that’s where I expect him to feature at the next level. I expect him to be a late first or early second-rounder, if he lands in the right situation, he could easily be one of the most productive rookies on this list.

Onto maybe the most fun player to watch in the entirety of the 2021 class, the legendary Kadarius Toney Montana. I am probably a lot higher than consensus on Toney, but I simply cannot put him lower than 6 with his entertaining style of play. Toney is the most agile player I have seen in a long time; he has a plethora of moves to beat defenders once the ball is in his hands. As mentioned earlier he probably is the best YAC guy for me in the class. Toney also had a good amount of work out of the backfield as a runner and that’s something that should continue in the NFL. What I liked the most was his tendency to bounce off of defenders and not go down without of fight. He is not afraid of contact.

What brings Toney down for most people is his issues with stronger corners and the fact that he rarely faced press coverage, we also don’t see his jump ball ability on tape which is not the case for one of my high-end comps for him. Toney also has some character concerns but if those can get overlooked, I fully expect him to get drafted in the late first or second round. He has star potential

For me, Tamorrion Terry is one of the most polarizing prospects in this year’s draft. I see a giant target with high-end speed and solid jump ball ability who is a home run threat on every play. I also see a 23-year-old prospect with lots of concentration drops, who has had serious injury concerns and did not produce every year. To me, this is the ultimate boom or bust prospect in terms of the receiver position. I think he has what it takes to be a high-level threat if he can get early day two draft capital with a team in need of a standout weapon.

I think Tylan Wallace is probably the most overlooked receiver coming out this year. He possesses high-end separation skills and plays much bigger than his size would suggest. Wallace dominated the Big 12 competition when he was healthy, averaging over 100 yards per game in his 3 seasons. However, he did suffer a torn ACL in 2019 which may result in teams passing upon him for a safer prospect. Take away the injury concerns and he would probably sneak into the first round. I think he will end up being picked in the mid to late second round, giving him solid enough draft capital and potential to develop as a wide receiver two on a good team.

I just recently came around to watching some Elijah Moore highlights and I must say he was very impressive on film. He is getting hype from experts in the community and lots of love from PFF. People are saying he may sneak into the first round. If that is the case, I can guarantee you he will jump Tylan Wallace and Tamorrion Terry in my rankings. Moore has elite speed and will become a deep threat on day one in the league. He is extremely shifty and can change direction on a dime. What may limit Moore is his diminutive size and super limited catch radius. He is not a big target by any means and will need a QB with an accurate deep ball to reach his ceiling in the NFL. If this can happen, we may have yet another potential pro bowl receiver.

Last but certainly not least we have dynamic Dyami, he will operate mainly as a field stretcher for whatever team he lands with. Dyami has solid footwork with a strong release and has no problem creating separation against press coverage, which will be a great skill for the next level. He did however run a very limited route tree but sometimes that is just a result of the system he is in like we saw with Terry McLaurin at Ohio State. Dyami is expected to go in the second round at the moment and I think he can be a productive wide receiver two in the NFL. He is not a go up and get it type of guy and had drop issues throughout his time at UNC. However, in the right scheme, he could easily become fantasy relevant within his first few years.

To wrap everything up, I just want to state that these are my PRE-DRAFT rankings. I can guarantee some players on this list will change positions after the draft takes place, and I would also wager some get knocked out of the top 10 entirely. In my humble opinion, this receiver class is more loaded than the dominant 2020 class we just saw. It would not surprise me to see multiple pro bowlers and future NFL stars from the 2021 class, as you may have noticed from my ceiling comps. Thanks for taking the time to read my work, this is my first of many articles I will be writing this offseason, be on the lookout for my running back rankings next.

Please make sure to follow me on Twitter at @acltearer, as well as the podcast handle @TheHateful8FF!