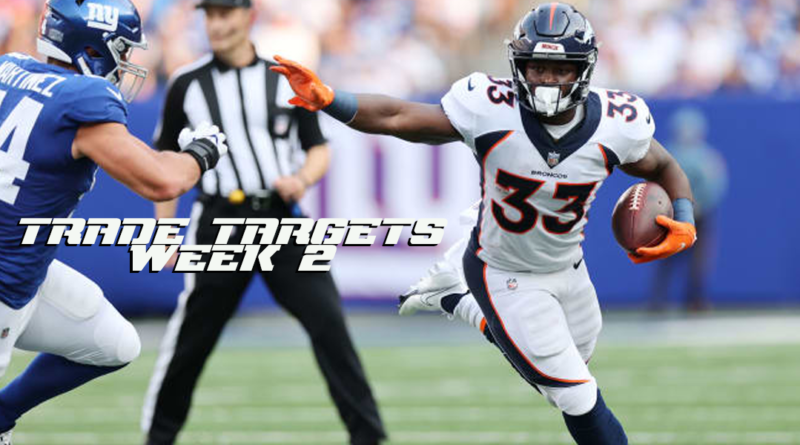 Fantasy football is a tricky game. We spend hours upon hours researching and mock drafting. We follow every single tweet from every single beat reporter and every second-hand story from every “cousin’s friend” for any edge that we can find. After spending months during the off-season studying, Week 1 is the first real test. Did your players play the way you expected them to? Was a top defense from a year ago exposed? Did the reigning MVP look like a rookie in his first preseason game?

The entire fantasy world is thrown on its head Week 1 and we tend to react, whether it be over-or under-, we react. What I suggest is taking advantage of this. Players develop their ADP for a reason, it’s the months of research I referred to. I try to not let Week 1 dictate how I feel about players too much. I’ll highlight some players that you may be able to acquire from a panicking league mate at a cheap price, and some players I think you should “sell” and make a profit on.

Javonte Williams (ADP RB25) – The 2nd Round rookie out of UNC likely disappointed whichever league mate rostered him and was expecting a burst onto the scene. With an ADP of 25 (Sleeper) can you blame them? If this team is depending on solid and consistent production out of the rookie early on in the season, then they may be second-guessing spending such a high pick on a player that was overshadowed by his veteran counterpart in Melvin Gordon. Gordon popped off a 70+ yard rushing TD making his day a bright one, but a deeper dive reveals a slightly different story. Williams out carried Gordon, and although neither were productive outside of the lone TD run, a 55% carry share looks good for Williams. If you’re in a position to buy “low”, and can withstand the early bumps that rookies deliver, you could be sitting on a gold mine come fantasy playoff time as we’ve seen in years past from Miles Sanders and Cam Akers.

Terry McLaurin (ADP WR10) – The talk all offseason was how McLaurin was going to be peppered all year long with targets by new veteran QB Ryan Fitzpatrick. After breaking out with over 1,100 yards on 87 catches with 4 different QB’s last season, McLaurin was being drafted as a top 10 WR. Unfortunately, Fitzpatrick went down early in the game with a hip injury and has since found himself on WFT’s IR. The good news is that the new starting QB, Taylor Heinicke, is more than competent. Heinicke took over for Dwayne Haskins during a Week 16 regular-season loss and showed that he was capable of commanding the team. His next appearance was a start in the Wild Card round against the, now Super Bowl Champion, Buccaneers. Heinicke threw for over 300 yards and linked up with McLaurin 6 times for 75 yards. If the team that has McLaurin is listening to offers due to the new situation, I would absolutely send an offer over.

Calvin Ridley (ADP WR5) – There’s really no way to say this nicely, the Falcons looked bad. Really bad. Matt Ryan was pressured, hit, or sacked on seemingly every pass attempt. New HC Arthur Smith had no answers for the Philadelphia front. Smith comes over from Tennessee where he was able to establish the run with reigning rushing champion Derrick Henry, as OC, and then take advantage of one of the most efficient play-action offenses in the NFL. With the 3rd highest Rushing attempts over expected, despite losing by quite a bit, it looks like he wanted to accomplish the same feat. Ridley’s production to start the year was obviously impacted. However, the Eagles have a very good defensive front and with Darius Slay on Ridley, I don’t expect this to be the case moving forward. If Ridley becomes available, whether or not it’s a low price, I think it’s something to pursue.

Ty’Son Williams (ADP RB56) – The BYU rookie was given the reins to the Baltimore backfield and it looked like he was the answer to all of the Ravens’ running game issues. However, despite having over 7 YPC, a TD, and 3 catches, the team leaned heavily on newly signed RB Latavius Murray in the 2nd half. The game went into Overtime and on the last play of Williams’ first NFL game, he missed a block in pass protection. That rusher sacked Lamar Jackson, forced a fumble, and set up the game-winning Raider TD on the very next drive. I like Williams, but the reliance on a veteran signed just a few days before the game, as well as two more accomplished veterans recently signed to the practice squad, is cause for concern. If I’m able to “sell high” on Williams and cash in on his performance, I would take advantage.

Melvin Gordon (ADP RB30) – In the same vein as Javonte Williams (mentioned above), the start to Gordon’s 2021 campaign was rather lackluster until he exploded for a 70 yard TD run. Gordon is an accomplished veteran in this league and the perfect player to help guide a young rookie RB, having had early career issues adjusting to the game himself. However, being 28 years old and in the last year of his deal, I don’t really see him being a part of the Broncos plan after this season. Add this to the fact that Denver traded up in the draft to take Williams and I like the prospects of Williams taking over the backfield before the season is over.

Sterling Shepard (ADP WR60) – Shepard had a monster first week with 7 receptions, 113 yards, and a TD. In his 6 years in the NFL, Shepard has never topped 66 receptions (2019), 872 yards (2018), or 8 TDs (2016 – rookie season). Newly signed Kenny Golladay seemed to not be a part of OC Jason Garrett’s game plan until the 4th quarter, Saquon Barkley was given a light workload coming off an ACL tear, and one of Daniel Jones’ favorite targets in Evan Engram was out with a calf injury. I’m not saying that Shepard won’t get his this season, but I do believe that all of these factors played a huge role in such a great game out of him. Acquiring Shepard likely didn’t require much of an investment, and I don’t know that the return on that investment isn’t at its highest right now.

If you have any further questions or just want to add to your fantasy football follows via twitter, you can find me at @FantasyAverage!