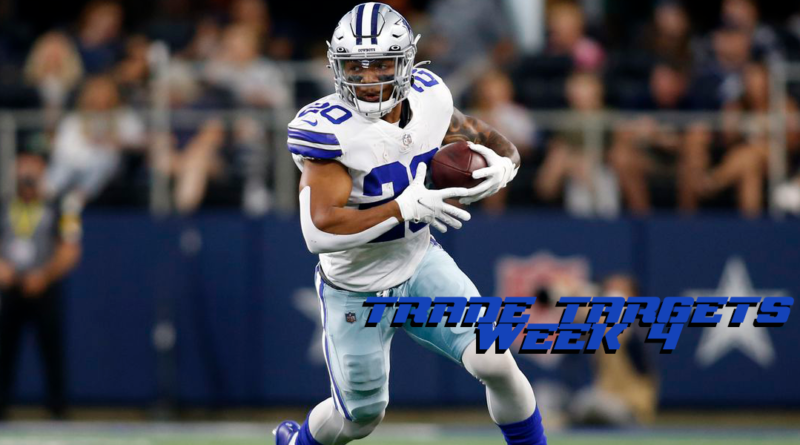 We are 3 weeks into the season and the true value of players is starting to take shape. Well, that’s not entirely true. Some players popped off Week 1 and then saw almost no snaps. Some players finally broke out Week 3, but is it legit? Whether you started out on fire at 3-0, or down in the dumps at 0-3, there’s always room to improve and there’s A LOT of football left to be played.

I’ll try to highlight some of the players that I’m targeting in trades across my leagues, as well as some players I’m looking to move on from.

Jalen Hurts (QB 4) – Although Hurts is in his 2nd NFL season, he’s only started 7 games. 3 of them are in an entirely new system than the 4 he played with during his Rookie campaign. On Monday Night Football, Hurts and the Eagles went on the road to take on their division rivals, the Dallas Cowboys. Hurts played arguably the worst game of his young NFL career and still threw for over 300 yards, 2 TDs, and added 35 yards rushing. Sure, most of it was in garbage time but if that is the “floor” Hurts provides in the fantasy domain then you may be able to grab him from somebody unwilling to look past his real-life performance.

Tony Pollard (RB 18) – Cowboys 3rd year RB Tony Pollard is currently sitting behind Ezekiel Elliot on the depth chart but he has certainly notched out a significant role in OC Kellen Moore’s offense. He now has had 2 straight games of over 10+ touches and had his snap share increase weekly, whilst Zeke’s has dropped weekly. If you’ve got the room on your bench, or are desperate for some RB help, I think Pollard can be acquired for a reasonable price with huge upside in the event Zeke gets hurt, or these trends continue.

Kyle Pitts (TE9) – Chances are that whoever rosters Kyle Pitts in your league, drafted him as the 4th or 5th TE off the board. And despite being a TE1 currently, chances are they’re extremely disappointed with the production they’ve seen from the former Florida star. The good: Pitts’ snap percentages have increased weekly, as high as 84% Week 3. He’s getting targets, and valuable targets (in the RedZone and endzone). His YPC has increased every week. The bad: We want more. If you’re able to acquire Pitts before his potential breakout (as he is, in fact, a rookie only 3 games into the season) you may be able to land yourself a nice positional advantage at the TE spot heading into the middle-back end of the year.

David Montgomery (RB 20) – Montgomery has done everything he could for HC Nagy and his Bears Offense. However, with the injury to Andy Dalton and another abysmal performance from Nagy the play-caller, I’m just not sure how much production you’ll be able to find out of Montgomery. The touches are there, as well as the snaps, but if you can find the league mate starving for RB depth and is willing to pay for the Week 1 version of Montgomery, I think it’s something that should seriously be considered.

DJ Chark (WR 40) – There were high hopes for Chark in the new-look Jaguars offense this season with the knowledge that he would be catching passes from 1st overall pick Trevor Lawrence. Although it hasn’t been all bad for Chark, with 2 TDs in 3 games, that’s about it in terms of keeping his value afloat. He’s getting the snaps and targets, but the problem is the passes coming his way aren’t good ones. That, the emergence of Marvin Jones as Lawrence’s “go-to” guy and the apparent pivot to a James Robinson focal point offense don’t look good for Chark’s long-term outlook. If you can take advantage of the high TD rate and ship Chark out early, I would take advantage.

Christian Kirk (WR 15) – So far this season, Kirk has been surprising fantasy managers as the current WR15. With 2 TDs Week 1 and over 100 yards Week 3, Kirk has been a nice fantasy asset. My concern with Kirk is the number of mouths to feed in the desert. With Hopkins, rookie Rondale Moore, and veteran AJ Green now getting in on the action I just can’t see the volume continuing. At least not with any consistency. I would be looking to move on from Kirk if I’m able to land WR18-22 value for him.