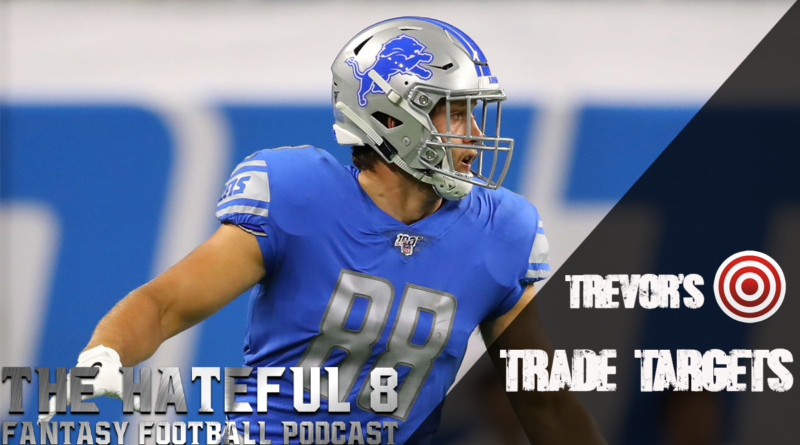 There is one word, in fantasy football…actually, no SPORTS community that rivals the word “Yes” in the English language, and that word is “Trade”. Trading is fun even if you didn’t partake in the deal, just adding your opinion to the league talk that is stirred up after a trade happens can last for hours, days, or years if you play in dynasty leagues. We get to feel like the boss and be in control when we make trades. Everyone wants to feel like they won the trade, whether that means getting your favorite player, trading away a superstar for a package of picks and young players, or just receiving a player on your favorite team of choice to give you some extra rooting interest.

Today I will be discussing some players you should be targeting in redraft and dynasty league formats. Without further ado:

Jared Goff, Los Angeles Rams – Goff had a rough start to the season scoring only 10 fantasy points in his first game against the Cowboys. Since then he has put up back to back 20+ point performances. The Rams offense has multiple weapons at Goff’s disposal in Cooper Kupp, Robert Woods, Van Jefferson, and Tyler Higbee. Spreading the ball is a staple of the Sean McVay offense and Goff does it well. He may be a backup on most teams so if you can try to pry him away and thank me later.

Joe Mixon, Cincinnati Bengals – I have always been a Mixon truther and I will die on this hill if I must. While his offensive line is almost non-existent I refuse to believe that Mixon will fail to break the 70-yard plateau and remain touchdown-less this season. He’s too big (listed at 6’1 220lbs.) and too talented to not be a productive back like we have seen from him before. It’s not like the Bengals aren’t feeding him the ball either, in the first three games he has 19 carries, 16 carries, and 17 carries. These numbers fail to reflect that the Bengals fall into negative game scripts and are forced to abandon the run. You should be able to acquire Mixon on the cheap right now so go throw an offer to anyone who owns him.

Anthony MacFarland Jr., Pittsburgh Steelers – MacFarland Jr. broke onto the scene last week carrying the rock 6 times for 42 yards, which is a very sexy 7.0 yard per carry. He was also targeted twice in the passing game with 1 catch for 7 yards. Now we know James Conner is the ‘Bell Cow” as Mike Tomlin labeled him just before the season, but his injury history will leave the door open for MacFarland Jr. to spell him and shine. MacFarland Jr. is the type of player the Steelers were hoping Jaylen Samuels could be. This is more of a dynasty league move but at the very least we could see MacFarland Jr. receive, literally, the passing game work in the Pittsburgh offense going forward.

Odell Beckham Jr., Cleveland Browns – Kevin Stefanski’s offense is built through the running game, we know this. Last year it was able to make Dalvin Cook, Alexander Mattison, Adam Theilen, and Stefon Diggs all fantasy viable options. Cleveland has Nick Chubb, Kareem Hunt, OBJ, and Jarvis Landry and so far the receivers haven’t been as reliable options this year but I think that will change. Stefanski loves to set up the pass via the run, now that he has the running game going in Cleveland I expect him to start working the two stud wideouts into the mix. Football twitter is writing Beckham off like he is an old, washed veteran but he’s still only 27 years old. It’s not like the Browns haven’t been targeting him either with 22 targets through the team’s first 3 games. Everyone knows you buy stocks low and sell them high, well OBJ is the perfect buy-low candidate.

Gabriel Davis, Buffalo Bills – I am man enough to admit when I am wrong and I will start by saying, I did not see this coming from Josh Allen this year. Davis is another dynasty player to buy early before he becomes unobtainable. John Brown and Cole Beasley are both on the back nine of their careers and to clear cap space I can’t see the Bills resigning them, especially when they’re paying Stefon Diggs and now Davis has shown what he can do in his limited playing time. Every game it seems like he’s making a highlight-reel catch. Being 6’3 he has the tools to be a stud wideout across from Diggs and give the Bills a very solid 1-2 punch for years to come. Go and get Davis now.

T.J. Hockenson, Detroit Lions – It is probably quite the shock to see a Detroit Lions player listed as someone to go out and get. Matthew Stafford was well on his way to finishing as a top 5 quarterback last season before an injury ended his year midway through the season. Stafford is usually a borderline top 10 fantasy quarterback though and the Lions have finally let Hockenson out of his cage, yes I went there. He has a build similar to George Kittle and he also went to the tight end factory that is Iowa, where both Kittle and Noah Fant went. Outside of Kenny Golladay, the Lions don’t have many other receiving options, it’s about time they are FINALLY getting Hockenson involved. He is .7 points in the 3rd game of the season from averaging 10 fantasy points a week. He has pulled in 13 of 16 targets for 170+ yards and a touchdown, we can expect these numbers to continue and even rise with his 6’5 frame and Stafford targeting him more in the passing game. Hockenson should be added in all fantasy football formats and will be a stud for years to come.

If you would like to follow me on Twitter, you can find me at @therealtrevt. Also, if you want more in-depth Season-Long or DFS help then check out AverageJoeNation.com