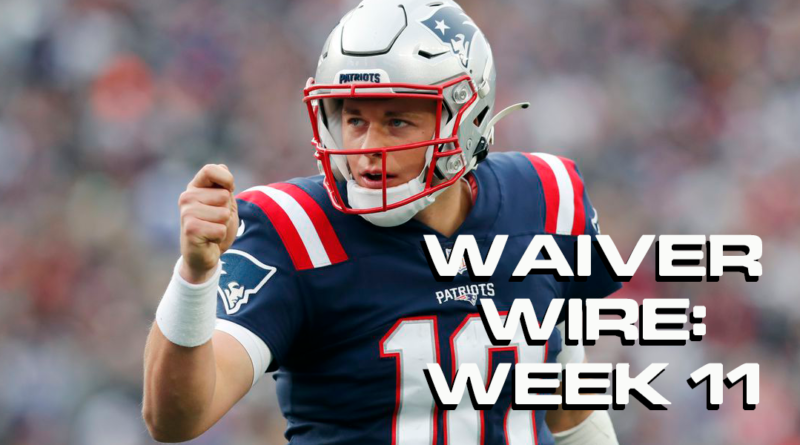 Tua has been injured over the last few weeks but looks to be healthy at the perfect time. The matchup this week against the New York Jets is almost as good as it gets. If you are in need of a streaming option this week, Tua would be my top add at the QB position. Tua is a high-end QB2 with an upside in week 11.

Baker has been an average QB for most of the year but comes into a great matchup in week 11 against the Detroit Lions. The Browns should have Nick Chubb back this week which should only help their chances at succeeding. Baker is a solid streaming option against the Lions. He is a mid-tier QB2 with upside in week 11.

Jones has shown potential throughout his rookie season, especially this past week against the Browns. This week the Patriots have a great Thursday matchup against a weak Atlanta Falcons defense. If you are in dire need of a streaming option, you could do a lot worse than Jones. Jones is a mid-tier QB2 in week 11.

There was uncertainty as to if Stevenson was going to play this past week and boy did he play. Stevenson looked exactly like what we had hoped he would look like if he had gotten the lead role. If for some reason Damien Harris was out this week, Stevenson would be a smash play this week against the Falcons on Thursday. If you are in need of a running back, Stevenson would be my top add to the position this week. He is an RB2 if Harris is out and offers flex value even if Harris plays.

The Titans backfield is ultimately a 3 headed monster, but that doesn’t mean that there can’t be a value from it. Foreman looked to be the best runner of the three backs and received a decent amount of carries in week 10. Adding Foreman is purely for depth/ playing him on really good matchups. This week against the Houston Texans is one of those matchups that you can gamble on. Foreman is a flex play in week 11.

On paper, Breida was the best running back on the Bills this past week. He received a few carries/ targets but was able to turn them into 2 touchdowns. Now relying on Breida to have the same kind of production is unethical but it is worth keeping an eye on him to see if he continues the same type of play. Breida is purely an add and stash. He could offer flex upside depending on how the Bills continue to use him.

I still can not believe that Bateman is still available in over 50% of leagues. He is my number one add at the WR position this week. Bateman is slowly becoming one of the best rookie wide receivers in the league. He is in the perfect situation to succeed, as the Ravens are one of the better offenses this year. If you are in need of a WR, I would definitely add Bateman in week 11. Bateman is a high-end flex play with upside going forward.

I was hesitant to play Elijah last week but he came through again and scored another touchdown. If you are a wide receiver needy, adding Moore would make a lot of sense in week 11. He is receiving enough targets to warrant flex consideration. He is a mid-tier flex with an upside going forward.

Agnew has been the best wide receiver on the Jaguars since week 6. He looks to have developed a great relationship with Trevor Lawrence and should continue to be one of the best passing options on the Jaguars. If you are in need of some depth at the WR position I would be happy to add Agnew in week 11. He is a weekly flex play with upside going forward.

Arnold has been a solid starting option over the last few weeks and comes into a decent matchup against the San Francisco 49ers. Even in bad matchups, Arnold has received a big enough target share to succeed in fantasy. He has quietly been one of the Jaguars top passing options since joining the team and that should continue going forward. Arnold is a high-end TE2 with an upside in week 11.

Thomas has not been taken off of the IR as of writing this article, but the hopes are that he is going to be taken off in time for the week 11 matchup against the Carolina Panthers. Thomas has shown that when healthy he can certainly be a viable starting option. If you are in need of a tight end, Thomas is worth an add. He is a high-end TE2 with an upside in week 11.