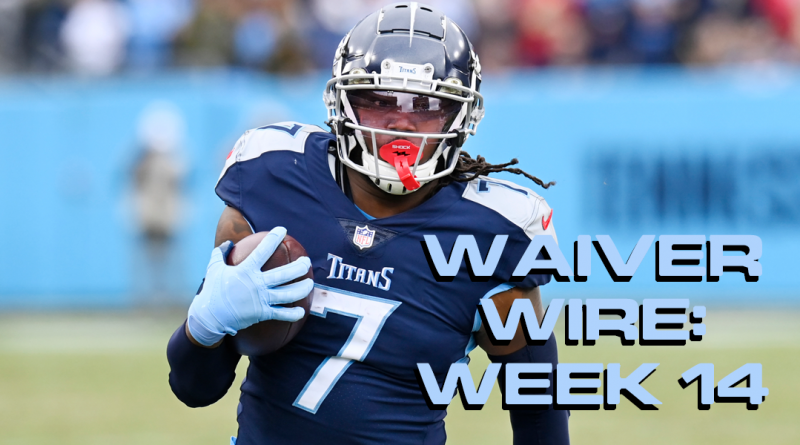 Hill was great from a fantasy perspective last week in his first start in 2021. As long as he is healthy this week, he should be a great play against a Jets defense that was just thrashed by Gardner Minshew. If Hill is available, he is my number 1 add at the QB position this week. He is a low-end QB1 with an upside.

Newton was a major disappointment in his last matchup, but he should get another chance to be the starting quarterback in week 14. This week’s matchup against the Atlanta Falcons is primarily the only reason why I have Newton in this article. If there is one matchup that I would be willing to roll Cam out, it is this one against the Falcons. If you need a streaming option this week Newton should be able to fill the need. Cam is a high-end QB2 with upside this week.

You most likely weren’t thinking about starting Big Ben for most of this season but sometimes desperation calls for desperate measures.  Ben is no longer elite but that doesn’t mean that he can’t be a serviceable option in good matchups. This week’s matchup against the Vikings should be a high-scoring matchup which should help Ben’s upside. If you are looking for a solid floor play with upside you can do a lot worse than Ben this week. He is a mid-tier QB2 with upside.

If you need a running back for week 14 Foreman might be the best option available this week. Foreman was out shadowed by Hillard two weeks ago but that doesn’t mean that he isn’t the lead back for the Titans.  This week’s matchup against the Jacksonville Jaguars is great, which gives me even more confidence in Foreman for week 14. Foreman is a high-end flex with an upside in week 14.

This is gross! Just when I thought Peterson was done, he made his way back into the league. This is for those that are completely desperate at the running back position. Nothing changed for Peterson, he is completely touchdown or bust going forward. As long as you understand the risk of adding Peterson, then he is worth an add in week 14. He offers low-end flex value with upside depending on the matchup.

This is a speculative add only if you have the bench space. It is not clear on the severity of Miles Sanders’ ankle injury. It is also not clear how Jordan Howard is progressing either. The only certainty is that Boston Scott should feel better from his illness by week 15. Adding Gainwell is purely based on the possibility that Howard and Sanders are not ready after their bye week. If that is the case then Gainwell would have flex value with upside.

**This is the point in the year where I believe adding top-tier running backs back-ups is a good decision.**

Gage did not disappoint against the Tampa Bay Bucs this past week. He is not an elite WR, but he is a streamable option as he is receiving a decent target share since Calvin Ridley took his break. If you are in need of a WR3/ flex option going forward, I would be willing to add Gage to my roster in week 14.

There is a good chance that Adam Thielen will be out for this week’s matchup, especially since it is on Thursday. Osborn should be one of the main beneficiaries of Thielen’s injury and should be the WR2 for the Vikings in week 14. If you are in need of a solid streaming option, Osborn would be a great option. He is a WR3/high-end flex with upside this week.

The Thomas injury isn’t as bad as it could have been, but he will most likely be missing a couple of games at the very least. This means that RSJ is once again a viable fantasy option at the TE position. If you are in need of a streaming option in week 14, I would look at RSJ’s way. He is a mid-tier TE2 with upside.

Very similar to Osborn, Conklin is now a beneficiary of the Thielen injury. As we have seen in the past, Conklin has been a decent option at times throughout 2021. Conklin should once again regain his role as the 3rd/4th option in the Vikings’ passing offense. Conklin is a high-end TE2 with upside this week against the

Jimmy Graham, TE, Chicago Bears (0.4% Rostered)    Do you know what Jimmy Graham delivers? It’s touchdowns. There is no middle for him. He either offers nothing or a score. So if you are at the end of the road and are ready to gamble on the tight end position, you should add Graham in week 14. He is a low-end TE2 with a touchdown upside.