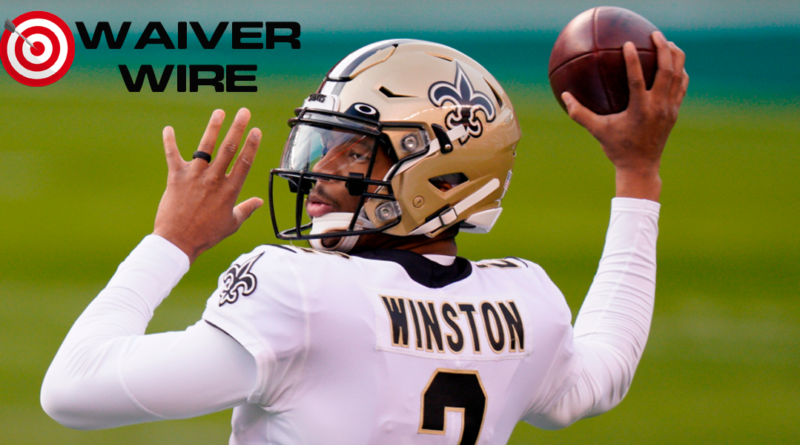 The waiver wire article is set up to help give you the best possible players that may still be available on your league’s waivers. The following players are all rostered in under 50% based on ESPN’s leagues. I usually write these before Monday’s game, so please keep an eye out if anything happens between the Ravens and Raiders.  If you have any questions or concerns please feel free to reach out to me on Twitter @ JGalt93.

Simply put, Jameis looked amazing in his first game as the starting quarterback for the Saints. He looked accurate and precise, which is something we had never really seen during his time in Tampa Bay. The Saints have enough talent to make Jameis a weekly starting option from here on out. If you are unhappy with your current QB situation I would make adding Winston a top priority. He has QB1 upside every week.

We all thought Goff going to Detroit was the end of his upside, but that did not seem like the case against the 49ers. What I think we will be seeing this year with Goff and the Lions is a lot of garbage time football. They will be coming from behind early and often which will let Goff accrue fantasy points through the air. He is not an exciting play but he should be the starting QB throughout the season as long as he doesn’t get injured. Goff is the perfect desperation play going forward. He comes at a cheap price and can be a decent play depending on the matchup. Goff is a low-end QB2 with upside.

Kirk is underrated in fantasy football every year. He is always on the fringe of a top 12 quarterback. The main reason he is faded is that he does not offer upside with his legs but he really doesn’t have to. He has plenty of talent surrounding him on offense and the Vikings defense is nothing to write home about. If you are in need of a QB with a solid floor and decent upside, Cousins is your guy. This week he faces a Cardinals team that should put up plenty of points, which will have Cousins relying on his arm. Cousins is a mid-tier QB2 with upside going forward.

Everyone expected that Mostert would be injured but not in game one. It was also expected that Trey Sermon would be the Niners RB to own after Mostert but that was also not the case on Sunday. Sermon was inactive on Sunday, which was a coach’s decision. That decision then made Mitchell the backup behind Mostert. It is not clear how bad Mostert’s injury is as of right now. Regardless, Mitchell is the top running back that I would want off the waivers. If he keeps the lead job he is a mid-tier RB2 every week with upside.

I never thought I would be writing about Ingram in a positive view again, but here I am. He looked great this past Sunday. Although it was against the Jacksonville Jaguars, the fact that he received as many carries as he did is intriguing. Now the matchup will not always be like they were on Sunday and I expect that the Texans will not have a lot of winning game scripts going forward. That doesn’t mean that Ingram can’t have value going forward. If you are RB needy, Ingram would be a good add this week. He is a low-end flex with an upside depending on the matchup.

The Eagles looked great, Gainwell looked great, it was a great week for the Eagles. Gainwell had a decent share of the carries and received a few targets in the receiving game. The interesting thing about Gainwell was how he was the preferred running back on the goal line. He also should have had 2 touchdowns but one was called back. If you are looking for an upside running back to add to your bench, Gainwell is the perfect guy. He is someone to keep an eye on and offers weekly flex upside going forward.

Honestly, I thought I might be writing about Rondale Moore this week and then Kirk exploded on Sunday and Moore was not the Cardinal to write about.  Kirk looked great. Usually, it is 2nd-year breakouts for wide receivers but maybe it will be a 4-year breakout for Kirk. The Cardinals looked awesome against the Titans and this week they face an even better matchup in the Vikings. Kirk is now a mid-tier flex with upside going forward. If he truly takes over the number 2 receiving role, his upside is even greater than we could imagine.

Everyone was fading the Giants offensive pieces and for good reason. But in darkness, there is always a chance for shining light. Shepard was that light this past weekend against the Broncos. Now there is no guarantee that his success will continue but he has shown this ability in the past. Most of the Giants’ offensive playmakers were hurt or coming off injury this past game. This very well could have been a case of the last man standing. Either way, Shepard is worthy of being added. He has plenty of upside as a highly targeted asset of a team that should be behind in most games this season. Shepard is a low-end flex going forward.

We all knew Agholor was capable of being the WR1 for the Patriots and it looked like he was after this week’s matchup against the Dolphins. Now he does have competition and it is not guaranteed that he will get a touchdown every week. That does not scare me away from him as a depth piece/ bye week fill-in going forward. Agholor is a low-end flex with upside from here on out.

If Rob Gronkowski is on your waivers for some reason, pick him up ASAP!

We always say, follow the touchdowns when it comes to tight ends. Well, Juwan received two this past week and I like his chances to continue to have success. Juwan is a WR at the TE position and is a massive weapon in the red zone. Juwan is a mid-tier TE2 with boom-bust upside.

Cook is yet again a solid tight end in fantasy football. He looks to be Herbert’s safety blanket across the field and should continue to receive enough targets to be a weekly streamer depending on the matchup. Cook is a TE2 with a solid floor going forward.

Njoku was not the Browns tight end that I thought I would be writing about. Njoku looked good in what was a great matchup against the Kansas City Chiefs. The Browns face the Texans this week which should have people very excited for the Browns’ offensive players. Njoku is a low-end TE 2 with an upside going forward.