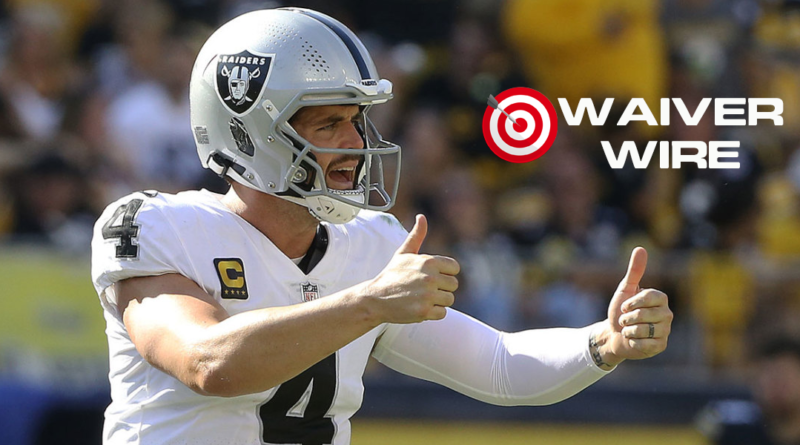 The waiver wire article is set up to help give you the best possible players that may still be available on your league’s waivers. The following players are all rostered in under 50% based on ESPN’s leagues. I usually write these before Monday’s game, so please keep an eye out if anything happens between the Packers and Lions. If you have any questions or concerns please feel free to reach out to me on Twitter @ JGalt93.

Every year Kirk goes undrafted and every year he is a solid fantasy starter. Kirk is surrounded by talent on the offensive side of the ball and his defense has been less than stellar so far this season. For those who might be dealing with subpar quarterback production, Cousins might just be the guy you want to add to your roster. Kirk provides a safe floor and has upside depending upon the matchup. His next three matchups are positive as they are against the Seahawks, Browns, and the Lions. Cousins has what it takes to be a top 12 QB in fantasy this year. He is a high-end QB2 going forward.

Derek is very similar to Cousins as he has been a solid streaming option over the last couple of seasons. This year is no different as Carr is using all of the talent surrounding him to give the Raiders the best chance at winning. After two difficult matchups( Ravens and Steelers), Carr has been able to put up QB1 numbers in each game so far this season. His upcoming schedule is inviting as he plays the Dolphins, Chargers, and the Bears over the next 3 weeks. If for some reason Cousins isn’t available, Carr is a decent addition to your roster. He is a QB2 with upside this week against the Dolphins.

It is starting to make sense why Bridgewater won the starting job over Lock for the Broncos. He looks very confident and has had great ball control so far this season. Teddy also has some great talent surrounding him which gives him the ability to rely on his arm as well as the running game. This week Teddy plays against the New York Jets who have shown no ability to be able to stop opponent offenses. His chances of putting up another great fantasy stat line are high in week 3. If you need an upside play I would consider picking up Teddy this week.

Pollard is the top running back waiver add for two reasons, he is an elite back up and he also can produce without an injury to Ezekiel Elliot. Pollard should be added in all leagues, especially after the production he had this past week against the Chargers. Now it is still recommended to leave him on your bench to see if this kind of production can happen every week. Regardless, Pollard is certainly worth an add this week. He is a flex/ bye week fill-in going forward with massive upside.

Patterson was on the honorable mention part of this article last week and he has shown enough usage to warrant adding him to your roster going forward. The Falcons offense is rough but that doesn’t mean it can’t have upside. Patterson’s value is much higher in PPR leagues, mainly because of his great ability to catch the ball. His usage in the run game is also promising and he should continue to produce on a weekly basis. Patterson is a low-end flex with upside going forward that should be able to get you 8-10 points on a regular basis.

After his usage last week it wasn’t too clear if he would be a fantasy football asset in 2021. That all changed after this past week’s game against the Giants, Mckissic looked to be the main target for their new starting quarterback. I would add Mckissic onto your bench for at least another week to see what his true usage is. Mckissic is a low-end flex with an upside in PPR.

Moore was another player that was on the honorable mention list just one week ago and is now one of the top candidates to add at the WR position. Moore should be rostered in all leagues. I am not necessarily saying he should be started next week, but I wouldn’t fault you for doing it. His usage looks like it is continuing to go up and that offers some confidence in starting him going forward. Moore is the perfect boom/bust play, he offers a solid floor and immense upside. If you are looking for the kind of player that can win you your week, Moore is that guy. He is a flex play going forward with a very large ceiling.

When I look at guys that I want on my team I don’t look at TD production as that can fluctuate from week to week. I look at target shares and Osborn has received a great number of targets over his first two weeks. That combined with the fact that he has also found the endzone this past week also has me excited for Osborn going forward.

Patrick didn’t disappoint those who decided to start him this past week as he found the end zone in week 2. It is pretty obvious that Sutton is the WR1 for the Broncos going forward, but there is still value as the #2 or #3 receiving option in this team. If your WR’s have been letting you down, adding Patrick is a good idea. Patrick is a flex play going forward.

Williams didn’t do anything in week 1, but in week 2 he looked like one of Murray’s top options. The question is do we believe this is going to continue or not. Tight end is such a tough position to predict, so when a player produces out of nowhere it is very hard to trust their production. Williams is worth an add this week if you have been unhappy with your current tight-end selection. He offers a low floor but has solid upside if he continues to produce as he did in week 2.

Doyle has had success fantasy-wise in the past, it has just been a little while since we have wanted to start him. It looks like Doyle is the preferred tight end for the Colts, so that is definitely something we should continue to monitor. If Doyle starts producing on a weekly basis, he is definitely worth adding to your roster.

What you want in your tight end is touchdown scoring ability and that is exactly what Knox has. He is in a great offense and has been receiving enough targets to warrant starting him if you need help at the tight end position. That fact alone is good enough for me to keep an eye on Knox going forward. Knox is a decent player to add to your bench/ a bye-week fill-in going forward until we see him continue this production more consistently.