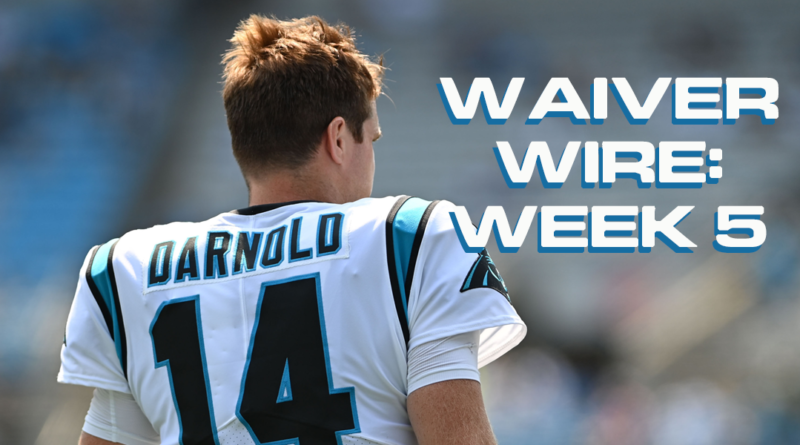 Darnold has been on fire over the first four weeks of the season. His future looks bright in Carolina and it doesn’t seem like anything is going to end his solid weekly production. Until we see that he isn’t worth starting, he is a low-end QB1 going forward every week. This week he faces an Eagles defense that has plenty of holes and can be beaten by opposing offenses. If you need a starter this week with a good floor and high ceiling Darnold is your guy going forward.

I wouldn’t have expected it but Daniel Jones is the QB6 in fantasy football. He obviously has enough talent around him to have success and surprisingly is skilled in running the ball as well. Jones is a viable streaming option, especially in nice matchups. This week the Giants play against a Dallas defense that has improved but can still be scored upon pretty regularly. If you are looking for a cheap option with a high ceiling then Jones is right for you this week. He is a high-end QB2 with an upside.

All I have to say is… it’s time. With Jimmy G being injured this is the situation we have all been waiting for, Trey Lance is the starting QB for the 49ers. Lance may very well be the best option on the waivers at the QB position. The only reason I have Darnold and Jones higher is that we have seen what they have been able to do so far this season. Lance has as high of a ceiling as there can be at the QB position. If you need pure upside, Lance is who you would want to add this week. He can very well be a QB1 going forward.

Williams is now the guy in Chicago with David Montgomery being sidelined with an injury for the next 4-5 weeks. Williams has an injury as well, so that is something to monitor. If Williams is healthy he should get the bulk of the carries in an offense that has no problem utilizing the run game. Williams is the top option at the running back position in this week’s waivers. He is a low-end RB2 going until Montgomery comes back.

Perine is the next man up if Joe Mixon misses some time due to injury. Perine would be a serviceable running back for those who are running back needy. He doesn’t offer as much upside as Mixon but does have the ability to rack up yards. If Mixon were to be out, Perine is a fine flex option going forward.

Collins has been on the radar for those who wanted to have the backup to Chris Carson in case an injury were to occur. Chris Carson isn’t injured but Collins was able to have a fine fantasy day this past Sunday. Collins is not an auto-start, he is more of an option to have on your bench and see how he continues to produce. If he were to continue to have the same usage that he had this past week, then he would be a solid flex play going forward with upside.

Crowder came back from injury with a vengeance and looks to be one of Zach Wilson’s trusted targets already. Crowder’s true value is in full PPR leagues but he offers a solid floor in .5PPR as well. If you are WR needy, Crowder is a great option that should be available almost everywhere. As long as he stays healthy he should continue to be a weekly flex option with a touchdown upside.

Green has looked great as of late. He is receiving a solid target share and looks like one of Kylers trusted targets. I do not see a reason why this should change going forward. Even if he doesn’t work out, he ultimately costs you nothing to acquire him. Green is a solid flex play with touchdown upside, especially in high scoring matchups

Jefferson has looked great at times this season but has also been a dud on certain weeks as well. He is what we call a boom/bust option as he truly does not deliver a middle, he is either great or downright bad. If you have room on your bench for a guy who could turn into a weekly producer then I would consider adding Jefferson. He is also the perfect play if your opponent is already up from Thursday night’s game and you need a guy that has the potential to win you your week. Jefferson is a low-end flex with tons of upside.

All I can say is Knox is legit. It is understandable why everyone was so hesitant to add/ start him but he truly looks to be one of Josh Allen’s most trusted targets especially in the red zone. Knox should be added in all leagues. He is a high-end TE2 with TE1 upside going forward.

What I said about Knox also goes for Schultz. The man looks to be one of Dak Prescott’s trusted targets. He has been receiving a great target share and has touchdown upside, especially in high-scoring matchups. Schultz is a high-end TE2 with an upside going forward.

Williams is back again. Unlike the other two above him, Williams has not necessarily been as reliable or consistent. What he does offer like the other two though is a high ceiling because he is in an elite offense. If you are tight-end needy, adding Williams would be a good idea. I would temper your expectations though until we see him produce at a consistent rate. He is a mid-tier TE2 with solid upside going forward.