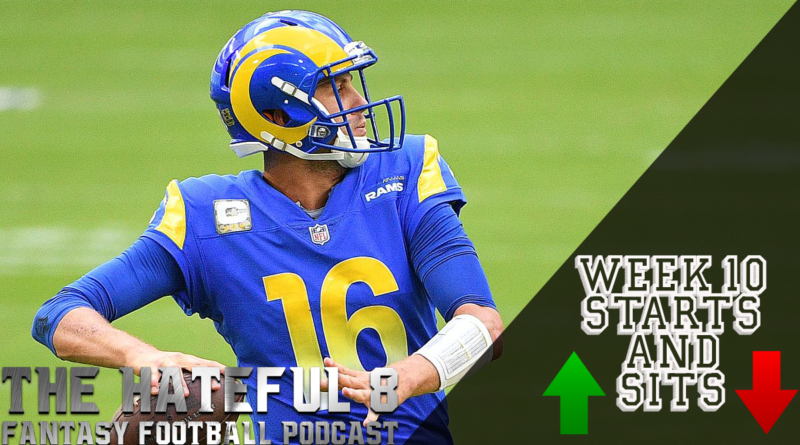 Week 10  is upon us, so of course, we need to know who to start and who to sit. Our start/sit article is not going to discuss the obvious players who should always be played. We examine matchups and usage from week to week, to give you the best chance at winning your weekly matchup. Good luck this week and don’t forget to not overthink it. Here are the Starts/ Sits for Week 10:

Herbert has not disappointed since taking over as the starting quarterback for the Chargers, and I don’t think that is going to start now. He has a great receiver group and has running backs that are able to move the ball. The Miami Dolphins defense has been much better than last year, but that does not make me hesitant to play Herbert this week. He is an auto-start until he shows that he isn’t. Herbert is a low end QB1 with upside.

Lock looked amazing last week, utilizing both his arms and his legs. This week he has a juicy matchup against a less than average Raiders defense. He should have no problem utilizing his offensive weapons. Lock is a mid-tier QB2 with QB1 upside in week 10.

Goff has been hot and cold so far this season. This week’s matchup against the Seahawks is too good to pass up though. Goff should have no problem getting down the field in what should be a high scoring game this week in LA. Goff is a solid QB2 with upside.

Burrow has been great this year, especially for a rookie quarterback. This week he faces a tough opponent in the Pittsburgh Steelers, which would make me hesitant to start him in week 10. As we saw against the Ravens, Burrow’s upside can be extremely limited. If you have a better option with a higher ceiling, I would lean playing them this week. Burrow is a mid-tier QB2 in week 10.

Newton has shown flashes of the old Cam that we knew and loved throughout this season. This week he faces the Baltimore Ravens and it should very well be his toughest matchup so far this season. I would limit my expectations for Cam in week 10 as the Ravens have the ability to shut down the pass and run. Cam is a mid-tier QB2 with a limited upside in week 10.

The Washington Football team’s defense has decently improved since last year. Stafford has been decent, but he is not putting up consistent numbers on a weekly basis. Now Stafford should be able to give you a decent enough floor in week 10, but if you need a high ceiling I would look elsewhere. Without his top wide receiver, Staffords upside is capped this week against Washington. He is a mid-tier QB2 with a limited upside.

Gibson has been limited because of J.D. McKissic, but that doesn’t mean I wouldn’t start him this week in a great matchup against the Detroit Lions. Gibson has been getting the bulk of the carries and has been finding his way into the endzone for the last two weeks. I like his chances of finding his way into the endzone once again or at least having a “starting” running back production in week 10. Gibson is a low-end RB1 with upside.

Davis is once again the man in Carolina, as Christian McCaffrey is out due to injury. Davis has shown ability when given the lead back duties and it should be the same story this week against the Tampa Bay Buccaneers. Davis is a mid-tier RB2 with upside in week 10.

Zack hasn’t been a league winning type of running back as of yet, but over the last three weeks, he has been a solid flex/ bye week fill-in for your fantasy squads. This week he faces a Cardinals defense that has been giving up around 100 yards on average to the running back position this year. I like Moss’s chances of receiving a bulk of the carries and even finding his way into the endzone this week. Moss is a high-end flex with upside in week 10.

Damien Harris, Rex Burkhead, James White, and now Sony Michel. The Patriots backfield is now packed to the gills. Not only are there a lot of mouths to feed but the matchup against the Ravens is not appealing whatsoever. If you can avoid playing them this week, I would. They are all low end flexes with limited upside in week 10.

The 49ers running back group is also one big conundrum. We all thought JaMycal Hasty was going to be the lead back last week and look where that got us. There is no real sign as to which running back in San Fran is going to produce week to week. Which makes it a gamble that I am not willing to play this week, especially against the Saints. One of these runnings should produce but without a clear sign as to which, I am benching my 49er running backs this week. They are all low end flexes.

Similar to the other two running back groups I wrote about, the Chargers running back group is a mess. Justin Jackson might play this week, Josh Kelley hasn’t been consistent, and now Kallen Ballage is receiving 15+ carries. There is no guarantee as to which running back will receive the bulk of the carries, that fact alone makes me fine not playing any of them this week against Miami.

Even without stable quarterback play, Terry has been a great wide receiver for fantasy this year. This week’s matchup against the Lions should be one of his best yet. Terry should have no problem slicing and dicing the Lions defense. Terry is a mid-tier WR1 with upside.

Sterling is not a flashy fantasy play but he has been one of the most consistent wide receivers over the last few weeks. This week he has a great matchup against a weak Eagles secondary. Sterling should be able to be slotted into your lineup as a WR2, especially during the bye weeks. He is a low-end WR2 with upside.

Samuel has been great for fantasy football over the last two weeks. He has been Bridgewater’s favorite target, and has shown his full ability in the pass and run game. Without Christian McCaffrey playing this week, I like Samuel’s chances of continuing this kind of production. Samuel is a high-end flex with upside in week 10.

Brown has been an utter disappointment for those who took him in the middle rounds of their drafts. He has shown bursts of ability, but overall the Ravens offense has been less than stellar this year. Brown just does not inspire confidence in this matchup. I would be looking for a much more reliable play with a higher floor/ higher upside in week 10. Brown is a low-end flex with a limited upside in week 10.

After weeks of being consistent, Davis is once again in the fantasy wasteland after posting a zero for fantasy managers this past week. This week’s matchup does not offer excitement either, as the Colts have been a defensive force throughout the season thus far. Davis is a low-end flex in week 10.

Hilton is primed to start against the Titans but that doesn’t mean you should want to start him. Hilton hasn’t performed anywhere close to where we would have pictured him at the beginning of the season. He is barely worth rostering as there are other options on your waivers with a higher upside. Hilton is a low-end flex with a limited upside in week 10.

Engram has not been a top-tier tight end all year, but he has been a solid starter over the last three games. This week he faces an Eagles defense that is susceptible to the tight end position. I like his chances of providing another successful fantasy day. Engram is a mid-tier TE1 with upside.

Hooper has been out due to an appendectomy but is now healthy and ready to play. The Cleveland Browns have a great matchup this week against the Texans. Without OBJ, there are plenty of targets to be had. I like Hooper’s chances at either finding the endzone or receiving a handful of targets in week 10. Hooper is a low-end TE1 with upside.

Jimmy has had good and bad weeks throughout this season. He is not consistent but does offer upside at the tight end position during bye weeks. This week he has a good matchup against the Minnesota Vikings. Jimmy should once again be one of Nick Foles favorite targets this week. Graham is a high-end TE2 with a touchdown upside.

It feels like ages since Tonyan was the TE1 in fantasy football. He hasn’t been consistent in weeks, so even with a nice matchup, I am hesitant to start him this week. We have seen how low his floor is, so if you can aim to start a player with a higher upside I would recommend it. Tonyan is a low-end TE2 with a limited upside.

Cook isn’t the tight end that we have seen in the past. He is no longer leaned upon by Drew Brees, which makes his production unreliable from week to week. With all the offensive weapons healthy, Cook is merely a touchdown-dependent tight end going forward. Jared is a mid-tier TE2 with a limited ceiling.

Irv was great last week for anyone who was willing to put him into their fantasy lineups. But let’s be serious, he will not get 2 touchdowns on two catches every week. This week’s matchup does not scream high upside, as I believe the Vikings will be in control for most of this game. Smith is a boom/ bust option at the tight end position.