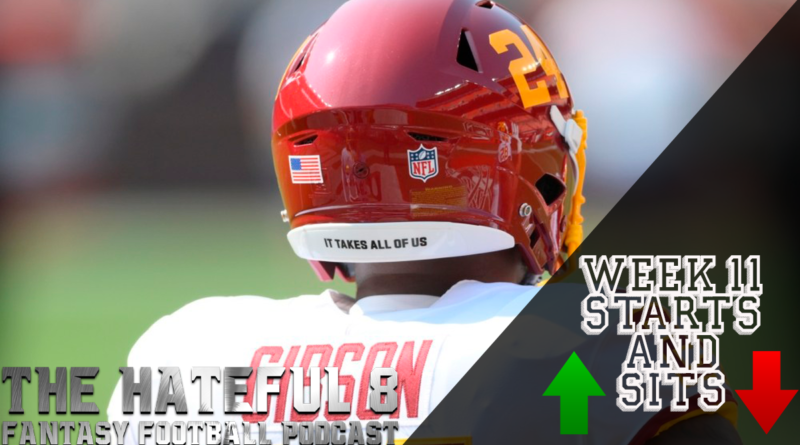 Week 11  is upon us, so of course, we need to know who to start and who to sit. Our start/sit article is not going to discuss the obvious players who should always be played. We examine matchups and usage from week to week, to give you the best chance at winning your weekly matchup. Good luck this week and don’t forget to not overthink it. Here are the Starts/ Sits for Week 11:

Herbert has been a set it and forget it, Quarterback, every week since taking over as the starting running back for the Chargers. This week is no different. Herbert should once again be able to provide QB1 numbers this week against the Jets.

Big Ben has been a decent fantasy starter for most of his matchups this year. This week he has a juicy matchup against a weak Jaguars defense. I like his chances at thrashing the Jaguars through the air in week 11. Big Ben is a low-end QB1 with high-end upside.

Cam has been up and down throughout the last few weeks. But he is still Cam Newton and still has the ability to use his arms and legs to have success. Cam is a high end QB2 with high upside.

Lock was on a great run since coming back from injury until last week. I am expecting another less than stellar fantasy performance this week against a much improved Dolphins defense in week 11. Lock is a low-end QB2 with limited upside.

Goff has been just plain blah over the last few weeks. In matchups where he should have great success, he has underperformed greatly. Goff also has a bad matchup against a decent Bucs defense. I would look elsewhere for a starting QB in week 11. Goff is a low-end QB2 in week 11.

I thought this was going to be Baker’s year, and Boy was I wrong! Even in a good matchup, I wouldn’t trust Baker. I’d put my money on this being a run-heavy game for the Browns as well. Baker is a low-end QB2 with limited upside in week 11.

Antonio has been nothing short of amazing as of late. He is sharing the backfield with J.D.McKissic but is still able to have great production on a weekly basis. This week he has a great matchup against a middle of the pack Bengals defense. Gibson is a high end RB2 with upside in week 11.

Davis is once again called upon to be the lead back for the Carolina Panthers. He has a great matchup and should make up for his lackluster production in Wheaton. Davis is a high-end RB2 in week 11.

Kalen has been great for fantasy managers since taking over the backfield for the Chargers two weeks ago. This might be the last week we are able to utilize Ballage’s upside. Ballage is a high-end flex with upside in week 11.

The Broncos backfield is a mess. The matchup this week is not intriguing, which would make me leave Gordon on my bench in week 11. He is a flex play with limited upside.

We had thought that Leonard would be the lead back for the Buccaneers, but it looks like Jones is proving to be the better running back. Fournette is nothing more than a low-end flex against the Rams.

The New York Jets offense is a mess. Although the Chargers have not been all that great at defending the run, I would still lean on benching Perine in week 11. He has a low-end flex with limited upside.

Terry didn’t produce like we thought he would last week, That does not make me hesitant to start him this week against the Cincinnati Bengals. Terry is the backbone of the Washington football team. He should have great success in week 11. Terry is a mid-tier WR1 with upside.

This week should be a field day for the Pittsburgh Steelers receivers. The Jacksonville Jaguars defense has been playing terribly. I would feel comfortable starting any of the top three receivers( Juju, Claypool, and D.Johnson) for the Steelers. They are all high-end WR2’s with WR1 upside.

Meters has been a pleasant surprise for the New England Patriots offense. He has been a consistent flex over the last three weeks and comes until week 11 against a porous Houston Texans defense. Meyers is a low-end WR2 with upside this week.

With Michael Thomas back in the fold and Drew Brees being injured, Sanders is no longer a reliable option for fantasy managers. Even in a juicy matchup against the Falcons, I would lean playing someone with a more reliable floor. Sanders is a low-end flex in week 11.

MVS has been a touchdown machine for Aaron Rodgers over the last two weeks. The problem is we know how flaky his production can be, and this week he faces a very good Colts defense. If you have an option with a better matchup, I would like to play them over MVS in week 11.

Hamler hasn’t been great but has been a flex worthy start over the last few weeks. He is receiving a great target share, but I believe that the Dolphins will limit the Broncos on the offensive side of the ball. Hamler is a low-end flex with limited upside in week 11.

Henry has been hot and cold in 2020. I think this week is the week he will turn things around. The charger should come out swinging, and I like Hunter’s chances at finding his way to the end zone. Henry is a low-end TE1 with upside.

Hooper disappointed those who decided to start him last week. I think he will turn around things in his second week back from his surgery. The Philadelphia Eagles have also been extremely susceptible to the tight end position. Hooper is a high-end TE2 with TE1 upside.

Logan was great for those who decided to start him last week. This week should be very similar, as the Bengals are extremely weak at defending the tight end position. Thomas is a high-end TE2 with upside.

Mike just hasn’t been what we had hoped. He is receiving a handful of targets but has not put them to good use. If you have another option with a higher ceiling, I would like to use them in week 11. Mike is a mid-tier TE2 with limited upside.

Richard has been good at times when called upon, but I believe his upside will start to dwindle as the Eagles introduced Dallas Goedert back into the lineup. If you need a tight end play this week, I would look for someone with a higher floor and a higher ceiling.

When both of the Minnesota Vikings tight ends are active, each other’s upside is limited. It looks like Irv Smith Jr is going to play this week. Ultimately starting either tight end is a dart throw against the Dallas Cowboys. They are both low and tight end two’s.