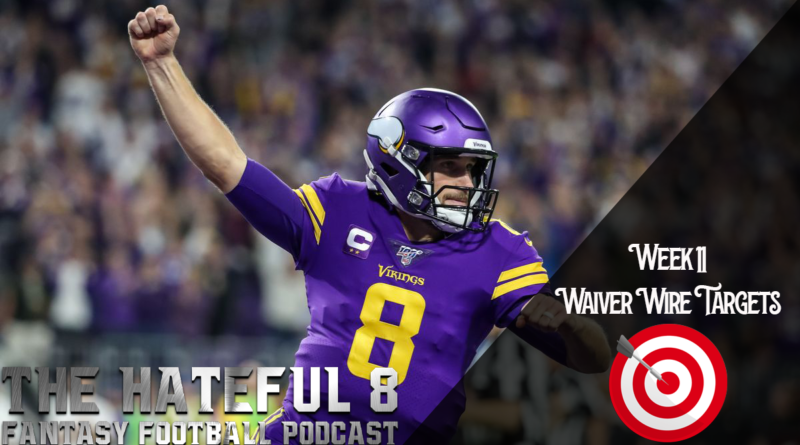 Cousins is not a league winner, but when called upon he is a serviceable streaming option in Fantasy. This week he faces a great matchup against the Dallas Cowboys. The Vikings should have no problem moving down the field in week 11. Cousins is a savvy waiver addition this week.

Drew Brees fractured multiple ribs this past week, so Jamies is now the starter in New Orleans. We all know what kind of upside Winston has. He has a low floor with a decently high ceiling. If you are in need of a bye week/ injury fill-in, Winston should be a good streaming option against the Falcons this week.

Smith is not a QB1 anymore. But he is a starting Quarterback and does have a nice matchup against the Cincinnati Bengals this week. He offers a decent floor for those who are looking for a reliable option in week 11.

Ballage continued his great production for a second week and should have good enough production to warrant flexing him in week 11. He is a high-end flex with upside in week 11. (His long term upside is capped because Austin Ekeler is due back in week 12).

Salvon was a great play for those who started him last week. The Miami Dolphins just released Jordan Howard, which shows they are comfortable with who they have. As long as the other running backs are out this week, I like Salvon’s chances are performing again. Salvon is a flex option this week against the Broncos.

Wayne has a bye this week, but that does not mean that he should not be added to all rosters. When has been underrated, and has been a solid flex throughout the past three weeks. As long as he maintains the lead-back role, I like his chances are continuing to produce flex numbers at the very least.

Over the last two weeks, Meyers has had an amazing target share for the New England Patriots. It seems that he is trusted by cam Newton, and his production should continue. I like his chances of being a weekly flex/low-end WR2 going forward.

MVS has been known as a total boom/ bust in fantasy. Over the last two weeks, he has been a trusted target for Aaron Rodgers and has been putting up WR1 type numbers. He is an add and bench for me this week as I would like to see what he does against Indianapolis this week. If you need to start him, he is a flex option with limited upside in week 11.

Hamler’s production has not been amazing, but it has been consistent. He is receiving a decent enough target chair since Drew Lock came back, to consider flexing him on a weekly basis. He has even more value in PPR leagues considering how many targets he is getting. Hamler is a mid-tier flex with upside.

Thomas has not been an amazing tight end but after Travis Kelce who really has. Thomas has been consistent to an extent. For the most part, he is receiving a decent target here. This week he faces a great matchup against the Cincinnati Bengals. I like his chances at four or more targets at the very least. He is a high-end TE2 with upside.

If Smith is out again in week 11, then I would consider playing Kyle Rudolph against the Cowboys. When he is the only tight end, Rudolph has TE 1 upside due to his potential target share and red zone ability. If Smith plays this week, I would not add Kyle.

I had to write about Taysom Hill. He is literally the only player that has tight end/quarterback playing ability in the ESPN format. Without Drew Brees, you have no idea what the Saints are going to do. Playing Hill is not for the faint of heart. But if you’re looking for a sneaky tight end play, roll out Hill this week. If it works out, you’ll look like a genius.