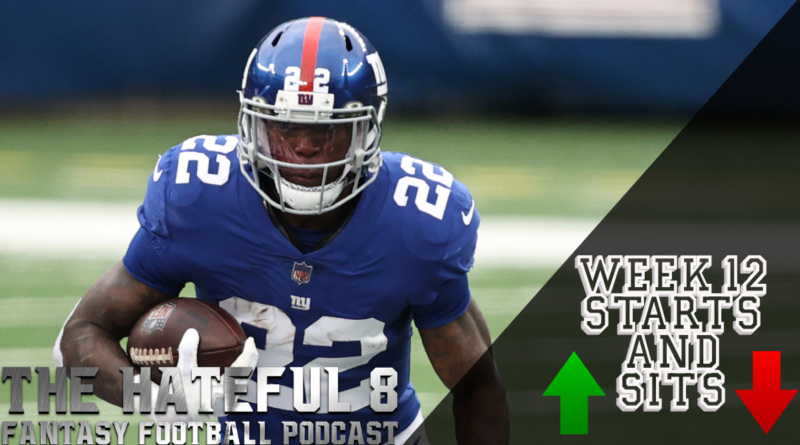 Week 12  is upon us, so of course, we need to know who to start and who to sit. Our start/sit article is not going to discuss the obvious players who should always be played. We examine matchups and usage from week to week, to give you the best chance at winning your weekly matchup. Good luck this week and don’t forget to not overthink it. Here are the Starts/ Sits for Week 12:

Who was a great flex for those who are able to acquire him, and should continue to be a solid quarterback streaming option this week against the Broncos. Hill has upside due to his ability to use his legs as well as his receiving ability. Hill is a high end QB2 with QB1 upside.

Stafford disappointed those who played him last week but has too good of a matchup to pass up on this week. Stafford should have no problem moving down the field against the Texans. He should be a high-end QB2 in week 12.

We were unable to start Jones most week this year due to matchups. This week’s matchup is as good as it gets. Jones has enough weapons in the pass and run game to get down the field against a weak Bengals defense. I like Jones’ chances at putting up starting QB numbers. Jones is a mid-tier QB2 with upside.

The Denver Broncos as a whole has not been all that great as of late. The passing game seems to be struggling over the last few weeks. Also, the New Orleans Saints defense has been top-tier for the past several weeks. I would try to find a quarterback with a better match-up and higher upside than Lock in week 12. Lock is a low-end QB2 with limited upside.

Ryan has been hot and cold this year. Coming off a solid day fantasy managers might consider starting him, but I would not. The Indianapolis Colts defense has been very good this year and has been able to shut down offensive production. Ryan is low-end QB2 in week 12.

You might be thinking that the matchup is too good to pass up, but it is exactly what I would do. Baker has been subpar throughout the whole season. I would prefer to start a quarterback with a higher floor and more consistent production. Baker is a low-end QB2.

Wayne has been as solid as they come since taking over as the lead running back for the New York Giants. This week should be no different, as he has a great matchup against the Bengals. Wayne should be a high-end flex with upside in week 12.

Bernard is the lead back for the Bengals until further notice. This week he has a great matchup against the New York Giants. Bernard offers upside due to his ability to do well in the running as well as the passing game. Bernard is a high-end flex with upside in week 12.

I will admit it, I doubted Harris’ ability as the lead back in New England. Every week he produces and is continuing to get a solid carry total. Harris is a solid flex option in week 12.

The Rams backfield is a mess. There is no real sign as to which running back will be successful from week to week. Altogether I would avoid this backfield if you could. Henderson is a low-end flex option in week 12.

Similar to the Rams backfield, the Buccaneers backfield has no real upside at the moment. I also expect this to be a game where the Chiefs will be up by a decent amount, which means the Buccaneers will be throwing the ball more than running in week 12. Fournette is a low-end flex option with limited upside this week.

The Colts backfield is murky at the moment. Hines has great weeks, and then completely disappears. I would lean that the courts will rely upon Jonathan Taylor this week. This means Hines can be left on your bench unless you need that boom/bust type of running back play. Hines is a low-end flex option.

Terry has been good for fantasy managers, this week he has that great type of upside that you want. The Dallas Cowboys defense is getting thrashed every week, that being said Terry should once again find himself having a great Thanksgiving day. Terry is a mid-tier WR1 with top tier upside.

Jefferson has been everything that we had hoped for and more. This week he might be the WR1 for the Minnesota Vikings since Adam Thielen is on the Covid list. Jefferson should have no problem handling that role and has immense upside this week against the Carolina Panthers. Jefferson is a low-end WR2 with upside in week 12.

Jones- hasn’t been amazing, but he has been a serviceable wide receiver for those who needed him. Jones may very well be the WR1 again, as there is no clear sign when Kenny Golladay will be back from injury. The matchup against the Texans is also very appealing. I like Jones upside this week. He should be a solid flex in week 12.

Jamison just hasn’t been the same as of late. It seems that he had a better connection with Sam Darnold than Joe Flacco. He no longer is the PPR  juggernaut that he was earlier in the season. Jamison is a low-end flex with limited upside in 12.

The quarterback situation in Jacksonville is pretty bad. Which would make me bench almost all of their receiving options as we don’t know what kind of connection there is between the receivers and Mike Glennon. Chark is a low-end flex in week 12.

Jerry just hasn’t been consistent enough to warrant starting him from week to week. The matchup against the Saints is another reason why I am perfectly fine with fancy managers benching him. Jerry is a low-end flex in week 12.

Evan disappointed fantasy owners against the Eagles before his bye. I think he will redeem himself this week against a weak Cincinnati Bengals defense. Engram is a low-end TE1 in week 12.

Hooper hasn’t been performing at the same level since coming back from his surgery. This week he has a great matchup against the Jacksonville Jaguars. I like his chances of receiving a decent target share or ending up in the end zone. Hooper is a high-end TE2 in week 12.

Rob has been hit or misses lately, mainly due to how many receiving options there are in Tampa Bay. I believe the Kansas City Chiefs will be in the lead for a good amount of this game. Therefore Gronk should have a decent amount of chances to score in week 12. Gronk is a mid-tier TE2 in week 12.

Jack just hasn’t been consistent this year. This past week he found his way into the end zone, but his limited targets share is what makes me think that was an anomaly. Until we see Doyle have some consistency, he is better left on the bench/ waivers in week 12.

Mike isn’t receiving enough targets to have the upside to warrant starting him on Fantasy. With the back-and-forth of quarterbacks, I don’t think any receiving option is necessarily reliable in Miami. Mike is a low-end TE2 in week 12.

Reed has been disappointing since taking over as the starting tight end for the 49ers. He just isn’t the same tight end that we knew and trusted as when he was in Washington. Reed is a low-end TE2.