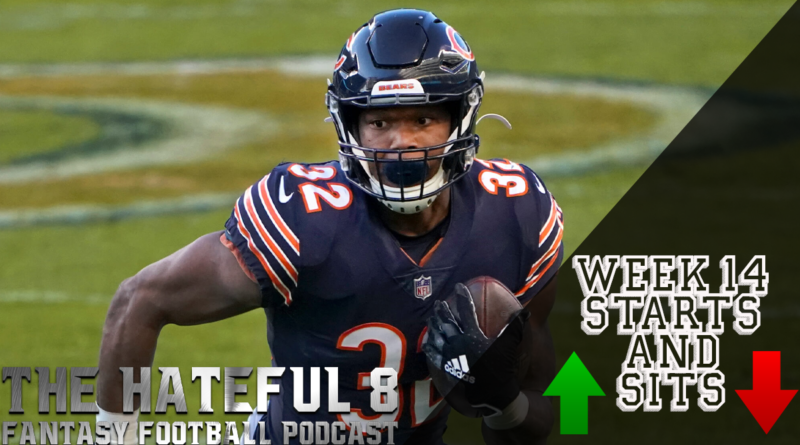 Week 14  is upon us, so of course, we need to know who to start and who to sit. Our start/sit article is not going to discuss the obvious players who should always be played. We examine matchups and usage from week to week, to give you the best chance at winning your weekly matchup. Good luck this week and don’t forget to not overthink it. Here are the Starts/ Sits for Week 14:

Herbert had a bad week this past week, but in all fairness, New England had been very stingy against the quarterback position. Herbert should be back to his normal self against one of the worst defenses in the league. Herbert is once again a low-end QB1 with upside in week 14.

Tannehill had a bumpy season full of ups and downs in 2020. That no longer looks to be the case as Tannehill has been a great fantasy starter as of late. He also has a great playoff schedule which makes starting him all that much easier. Tannehill is a high-end QB2 with QB1 upside.

Stafford has not been good this year but is a serviceable starter in good matchups. Now while playing against Green Bay isn’t a perfect matchup, the Lions should be down for most of this game. This means Stafford will have to utilize his arm and will give fantasy managers a decent upside at the QB position. Stafford is a mid-tier QB2 with upside in week 14.

Hurts has upside but I would not risk it in his first NFL start, especially against the Saints. He is better off on your bench until we see how he handles the starting job. Hurts is a low-end QB2 in week 14.

Carr has been a serviceable QB when the matchup was right. This is not one of those weeks. The Colts have been at the top of the list for defenses in 2020. I would look for another option in week 14. Carr is a low-end QB2 with limited upside.

Baker was on fire in week 13. There is no guarantee that we will be seeing that same Baker in week 14 against the Ravens. Baker has been a disappointment for most of this year and the Ravens defense has been top tier throughout most of 2020. Those two facts alone would make me look elsewhere. Baker is a low-end QB2 in week 14.

Montgomery has been simply amazing over the last two weeks. It seems that things are finally falling into place and he is receiving the workload that he deserves. He comes into week 14 with a sweet matchup against the Houston Texans. David is a low-end RB1 with upside in week 14.

Gallman has been as reliable as they come since taking over as the lead back for the New York Giants. This week he has a great matchup against the Cardinals. I like his chances of continuing his production in week 14. Wayne is a mid-tier RB2 with upside.

It is easy to forget what Jones was able to do in week 12 due to being on bye in week 13. Jones should come into week 14 with a heavy workload, as Coach Arians stated that they need to get him the ball more. The matchup against the Minnesota Vikings doesn’t hurt either. Jones is a low end RB2 with upside in week 14.

I never thought that I would be writing about sitting Zeke, but it is 2020 and here we are. Zeke is dealing with a hamstring injury right now. He also happens to be on one of the worst teams in the NFL, which leaves little upside to start him even if he plays. Zeke is a risky RB2 in week 14.

Booker had a great number of carries in week 13, but he still wasn’t able to produce a decent stat line. Even if Booker gets the start, I would look at other options with higher ceilings. These weeks are too important to risk it on a low floor/low ceiling play. Booker is a flex option with limited upside.

On paper, Barber looks like a good start, but the potential that he busts this week is pretty good. The matchup is not ideal, and McKissic will be relied upon as the main back this week. Unless Barber falls into the end zone, you will most likely be disappointed if you start him. He is a low-end flex option in week 14.

Davis surprised everyone this past week and completely blew up. I’m not expecting the same this week, but I am expecting a solid fantasy day from Corey once again. Corey is a low-end WR2 with upside in week 14.

Samuel has been cleared from COVID and will be one of Bridgewater’s top targets this week. D.J. Moore and Christian McCaffrey will be out this week, which will leave plenty of targets up for grabs. Samuel is a high-end flex with upside in week 14.

Hilton has surprisingly been consistent and on fire for the last two weeks. I like his chances at continued success this week against the Raiders. Hilton is a flex option with upside in week 14.

The situation in San Fran is unreliable. There is fantasy value to be had but there is no consistency through the running backs and receivers. Aiyuk is a flex option with a limited ceiling in week 14.

The Jaguars receivers are all over the place. There is an upside, but it doesn’t look like there is consistency with Glennon behind center. Chark is a low-end flex in week 14.

Shepard’s value has been hurting since losing Daniel Jones behind center. Unless Jones comes back from injury, I would leave Shepard on my bench. He is a low-end flex in week 14.

Gesicki has been great over the last two weeks and it should continue going forward. The Dolphins should be down for most of this game which means Gesicki will have plenty of opportunities to score. He is a low-end TE1 with upside.

Thomas was amazing last week. He looks like he is a trusted target for Alex Smith. Even against a tough opponent,

Thomas should receive enough targets to be started. He is a high-end TE2 with upside.

Cole is for those looking for a high upside play at the tight end position. It may be risky, but sometimes risk pays off. Kmet is a mid-tier TE2 with upside.

Unless Smith gets in the end zone, he is totally unusable. That is the case with most Tight ends, but Smith used to receive several targets a game. Smith is a high-end TE2 but could deliver a really low floor.

Ertz is no longer the elite level tight end going forward. Goedert looks to be the TE1 for the Eagles and things should continue to be that way. The matchup is not ideal either. Ertz is a mid-tier TE2 with limited upside.

Reed has not been the star tight end that we have known in the past. He hasn’t even been serviceable for most of the season. I would keep him on the bench, especially against Washington’s defense. He is a low-end TE2 in week 14.