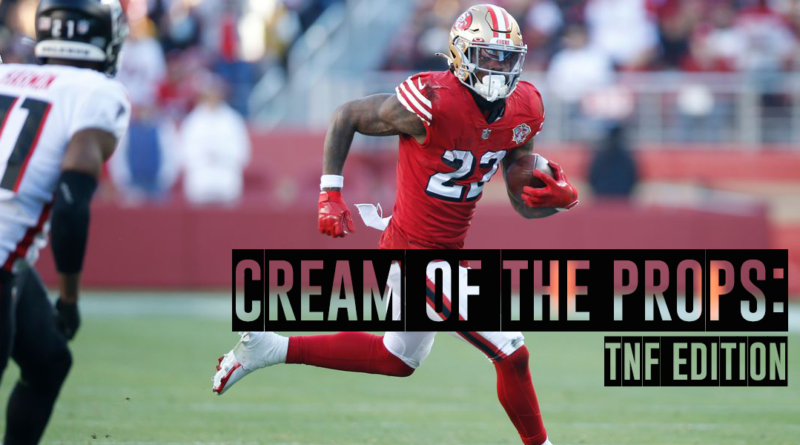 Have you ever been super invested in a show or series? You love the characters; the plot and writing are phenomenal. You watch every chance you get, and you’re always left wanting more. Then out of nowhere, there’s that one episode (or even season) that you watch and think to yourself, “What the hell was that?”

That’s what we were all thinking last week, watching our fantasy football teams either collapse or barely make it through to the next round. So just like with our favorite show, we’re going to pretend that crappy episode never happened and excitedly wait for next week. Thankfully for us football fans, we only had to wait a couple of days to get a chance to forget about one of the worst weeks of football that I can ever remember.

On Thursday Night Football, the San Francisco 49ers travel to Tennessee to face off against the Titans in what should be an excellent game to right the ship and set the stage for a much more entertaining Week 16. Here are the best player props to target this Thursday night, or as I like to call them, the “cream of the props.”

Perceived Game Script: The 49ers are -3 with the O/U set at 44. I see this game playing out with Tennessee getting out to a lead and playing with a positive game script for the majority of this game. Because of this, the 49ers will need to pass to keep up, meaning more volume for their passing options and less for their injury-plagued run game.

Elijah Mitchell is still dealing with a concussion and a knee-swelling issue and will miss his third consecutive game, which means another week of Jeff Wilson getting the start in the 49ers backfield. Last week, Wilson managed his best performance of the year against the Falcons, toting the rock 21 times for 110 rush yards and his first and only touchdown of the year. However, the 49ers saw a positive game script for most of the game, and the run-heavy offense took advantage against a struggling Falcons defense. The game script won’t be in their favor against the Titans. Combine a negative game script with Deebo Samuel seeing an unusual amount of work in the rushing game, totaling six rushing touchdowns on the year (including 1 in each of his last five games), and you have a rushing TD prop that you can take to the bank.

Quarterback rushing yard props are always enticing. While I usually choose to stay away from them (QB rush attempts are typically harder to predict), I’m confident taking the over on this one. Since Derrick Henry’s injury in Week 8 (7 games including that week), Tannehill has had at least four rush attempts and more than 15 rushing yards four times, and he’s also totaled four rushing TDs in that same timeframe. The 49ers have also allowed the 3rd-most rushing yards per game to quarterbacks, making this prop an easy lay-up (I see you, Air Tanny).

Aiyuk’s season, so far, has been the picture of inconsistency. Last week, he totaled only one catch for 36 yards, but this can be attributed to the 49ers seeing that aforementioned positive game script and simply not needing to launch the ball downfield as Aiyuk saw only two targets the entire game. In the last nine games since the 49ers bye in Week 6, Aiyuk has hit this prop five times. The Titans defense is also the 3rd best matchup for opposing wide receivers. Look for Aiyuk to bounce back in a big way and cash in on this prop.

It took a couple of weeks for the Titans to find a solution for Derrick Henry’s injury, but Foreman has emerged as their go-to, early-down running back with over 100 rushing yards in two of his last three games. In his five games played this season, Foreman has also finished with more than 8.5 receiving yards in four of those games. With a positive game script imminent, Foreman’s rushing volume should be enough to overcome the 49ers rush defense (2nd in Rush DVOA according to FootballOutsiders.com), and he will smash both of these props.