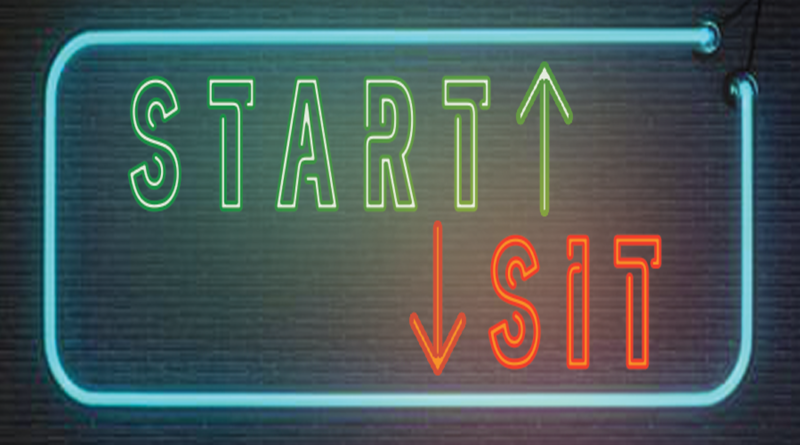 Week 2 is upon us, so of course, we need to know who to start and who to sit. Our start/sit article is not going to discuss the obvious players who should always be played. We examine matchups and usage from week to week, to give you the best chance at winning your weekly matchup. Good luck this week and don’t forget to not overthink it. Here are the Starts/ Sits for Week 2:

“Insert quarterback versus the New York Giants”. Trubisky this week is no different. The Giants defense is not intimidating and should allow the Bears to have plenty of scoring opportunities. Trubisky is once again a solid streaming option, and could very well produce QB1 numbers this week in New York.

Unlike week 1, Stafford is a solid starting option this week in Green Bay. Stafford was without his top wide receiver in Kenny Golladay last week, and that will be the same in week 2. No matter, Stafford was able to utilize his other options and put up a decent stat line against a better Bears defense. This week he faces the Packers defense that was just thrashed by Kirk Cousin and the Minnesota Vikings through the air. Stafford is a high end QB2 with upside this week.

Entering his second year with the Titans, Tannehill continues to be a solid streaming option in fantasy football. This week he faces a depleted and beatable Jacksonville Jaguars defense. Gardner Minshew and the Jags offense looked great in week 1, so there is the chance that this could be an offensive shoot out. Tannehill is a QB2 with upside this week.

Carr couldn’t even put up a solid stat line against a beatable Panthers defense last week. The chances of him doing so against a solid Saints defense is slim to none. Unless you’re in a very deep league, there is no reason to start Carr this week. Leave him on your waivers/ bench in week 2.

Teddy has plenty of offensive weapons to succeed this year, especially in fantasy. But this is one week that I am not high on him. The Bucs are the one team that can slow down Christian McCaffrey and have a solid defense all around. While there is the chance that the Panthers will have to play catch up, I am still leaning towards Teddy not producing at a high level in week 2. He is a Low-end QB2.

Lock is having a rough start to the season, and it definitely is not going to get easier against the Steelers. He is possibly heading into week 2 without his lead wide receiver and will be without Philip Lindsay. Until we see more consistent production and a fully healthy offense, I would let Lock sit on your bench/ waivers.

Jones looked to be the best of the Tampa Bay running backs last week, and I believe that will continue into week 2 against a susceptible Panthers defense. While Fournette will continue to come into the mix, Jones looked to be in great shape to start the season. He has every opportunity to keep the lead back duties and should have the chance to score some touchdowns in week 2. Jones is a solid flex with upside.

Montgomery looked good last week against the Lions. This week he faces an even better matchup with the New York Giants. Montgomery should receive a decent amount of carries and receive a handful of targets in week 2. He is not a week winning type of play, but if you need a solid flex with the upside he is your guy.

I can’t believe I am telling you to start Adrian Peterson in 2020, but here I am. Peterson looked good as always, and I do not see that changing. It is such a Lions thing to have a young stud running back in D’andre Swift, and play Adrian Peterson over him. That is exactly what happened last week, and I project it to happen again this week. Green Bay’s run defense was decent but still allowed Cook and Mattison to put up solid numbers last week. Peterson is a low- end flex with upside in week 2.

Unlike Peterson, Gore is not in a good situation to succeed. He may receive the workload, but that doesn’t necessarily mean anything will come of it. San Francisco still has a decent run defense and should be able to control the Jets run game. I would leave Gore on your bench this week and see how Gase disperses the carries before rolling the dice on a Jets running back.

Miami’s running back group is just gross. When we thought it would be Jordan Howard or Matt Breida, it turned out to be Myles Gaskin. This week Miami faces a great Bills defense, which only helps my case for not touching a Miami running back with a ten-foot pole. Let alone putting one in my lineup in week 2. Avoid all Miami running backs. One may score/ put up flex numbers but good luck figuring out which one.

Michel was serviceable in week 1 for everyone who actually played him. Take away his touchdown, and it is still the Sony that we know and dislike from 2019. As if that wasn’t bad enough, now Cam Newton will be vulturing goal-line touchdowns from the running backs in New England as well. If you are desperate, Sony does have the ability to fall in the endzone any given week. He also has the ability to run 10-15 times and get you 30-40 yards. Keep Sony on your bench in week 2.

Parris was a bright spot in fantasy last week for the Colts.  This week he faces a Vikings defense that Aaron Rodgers just beat easily in week 1. This game has all the characteristics of being a shootout, which leads me to be comfortably rolling Campbell into my WR2/ flex spots in week 2. He is a flex with upside.

Williams looked to be the most consistent wide receiver for the Chargers in week 1. Tyrod Taylor looked for Williams on a regular basis which gives hopes to those who want to start him in week 2. The Chargers face Kansas City this week and should be trailing for most of the game which leads me to believe that Williams is the wide receiver play that I would want in this matchup. When healthy Williams is a deep threat and should have plenty of opportunities to haul in passes this week. He is a flex with a high upside.

Miller is the exact type of receiver that Tom Brady loves. He was targeted heavily last week, and this week the Bucs are potentially going to be without Chris Godwin. Which leaves me wanting to take his upside in week 2 against a weak Panthers secondary. Miller is a low-end flex with upside in week 2.

This is not a slight against Preston, but the Miami Dolphins offense as a whole is in rough shape. With Devante Parker being injured, It should be Williams’ time to shine. But with this week’s matchup being against the Bills, I would bet against Williams and the Dolphins in week 2. If you have other options, I would recommend playing them as the floor and ceiling should both be limited for Williams this week. He is a bench stash in week 2.

Jeudy looked flustered in week 1, and it’s completely understandable. He is currently his team’s WR1 and that is a lot to take on especially as a rookie. I think he has the talent to do the job, but I wouldn’t bet on him in week 2 against a tough Steelers secondary. Jeudy is personally a bench for me this week. The Broncos current situation and matchup would lead me to leave Jeudy on my bench in week 2.

Can it get any worse for the 49ers? Not only did they lose their WR1 but now George Kittle is out dealing with a knee injury. Someone will come out of this matchup with decent stats, but there are no real signs as to who it will be. I wouldn’t start any 49ers receiver in week 2 unless you are fine with no floor and an unknown ceiling.

Fant was as solid as they came last week for Denver. What you look for in tight ends is athleticism and touchdown scoring ability. Both of which Fant is able to deliver on. I would roll Fant right into my lineup this week, even against a stout Steelers defense. He is a low-end tight end 1 with an upside in week 2.

Smith delivered for fantasy last week with a touchdown and a solid stat line. He faces a weak Jags defense this week and should continue being the #2 option for the Titans passing game. Smith is a low-end tight end 1 with an upside in week 2.

The Jets offense is just plain bad. Jamison Crowder was the sole bright spot last week, and this week he has been ruled out. This means someone has to get his targets, and I would bet on Herndon being one of the main recipients. If you are TE needy, Herdon can be slotted in this week. He is a high-end tight end 2 with upside.

Schultz is now the top tight end in Dallas, which may make you think he should produce. But I would not rely upon that fact alone as a reason to start him this week against the Falcons. I would wait and see on Schultz.

The Vikings tight ends have upside, but with both of them being there it is limited on a weekly basis. You would hope that Irv Smith would breakout, but that just hasn’t happened yet. For the time being, I would stay away from both Vikings tight ends. There are many more reliable options on the waiver wire.

Knox is one of those athletic tight ends that you should target, but he just doesn’t have the touchdown upside that you would want. Until we seem him have a consistent target share, I would leave Knox on my bench in week 2.

If you would like to follow me on twitter, you can find me at @JGalt93. Also, if you want more in-depth Season-Long or DFS help then check out AverageJoeNation.com