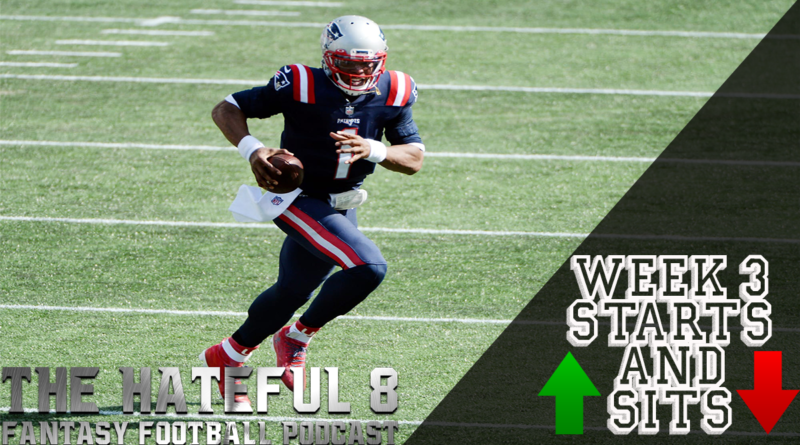 Week 3 is upon us, so of course, we need to know who to start and who to sit. Our start/sit article is not going to discuss the obvious players who should always be played. We examine matchups and usage from week to week, to give you the best chance at winning your weekly matchup. Good luck this week and don’t forget to not overthink it. Here are the Starts/ Sits for Week 3:

Newton has been nothing short of amazing this season. Compared to how he has looked over the last few seasons, Newton looks to be in as good of shape as possible. He has been able to do damage through the air and is still deadly with his running ability. This week he faces a Raiders defense that has shown vulnerability over the last two weeks. Cam is a low-end QB1 with upside in week 3.

Big Ben hasn’t been amazing so far this year, but he has been a solid fantasy quarterback. This week he has a great matchup against a below-average Texans defense. He should be able to move down the field with ease and has every opportunity to be a solid fantasy start this week. Ben is a low-end QB1 with upside.

Trubisky wasn’t all that amazing last week, but he also didn’t need to be against the Giants. This week is a different story, as the Falcons should be able to put up numbers on the Bears. Which should leave Trubisky slinging the ball all game long. The Falcons also have an overall bad defense, which makes playing streaming Trubisky this week even more appealing. Trubisky is a mid-tier QB2 with upside this week against Atlanta.

The Jets look rough. I mean I really don’t have to persuade you to not play Darnold. The Jets offense has been beaten up since week 1, and it does not look like it is going to get better anytime soon. Bell is out, Perriman and Crowder are both questionable, and the depth past that is not worth talking about. Don’t play Darnold unless you are desperate. He is set up for failure, and it is not going to be pretty against Indy.

Driskel looked great last week against Pittsburgh, at least from a fantasy perspective. This week may be a different story, as the Bucs are playing solidly from the defensive side of the ball and they will have a week to plan ahead. If you are in a tight spot, Driskel might get some garbage time points. Ultimately I would not rely upon that and would look for a better option in week 3.

Goff looked great last week against Philadelphia, but this week will be a different story. The Buffalo Bills are playing out of their mind, and they have a solid defensive unit. I expect this to be the greatest challenge defensively that Goff has faced so far this year, and Buffalo has the ability to limit his fantasy upside. Goff is a low-end QB2 with a limited upside this week in Buffalo.

Zach Moss is out. That is really all that needs to be said, but I will continue. It is now Devins time to shine, if he doesn’t do it this week then he never will. The Rams should prove to be the Bills toughest opponent and should put up solid numbers against the Bills. I expect Singletary to get a heavy dose of carries and targets in week 3. He is a mid-tier flex with upside in week 3.

Mckinnon is back! He played the long game that’s for sure, and now has the lead back role for the 49ers at least for 1 week. This week he has a decent matchup against the Giants and should be able to put up flex-worthy numbers at the very least. Mckinnon is a flex with a solid upside this week.

Antonio showed flashes of ability in games 1 and 2 and was able to get into the end zone in week 2. I would hope that Washington would see what they have in him and would continue to increase his workload as the weeks progress. Gibson has a positive matchup this week against Cleveland. The Browns have the ability to score, which should let Gibson receive a solid number of carries and targets. Gibson is a high-end flex with upside in week 3.

It has been a really rough season so far, and losing Saquon did not help the Giants one bit. Someone here should have a decent game, but we don’t really know who it will be. This is a wait and sees situation. Dion Lewis, Wayne Gallman, and Devonta Freeman all offer upside, but their floors are incredibly low until we see how the backfield unfolds. The Giants backfield should be left on your benches/ waivers in week 3.

Mike is now the lead back for the Panthers, but nobody knows what kind of usage he will have. There are reports Curtis Samuel might play from the running back position, but nobody will know for sure until the game. Davis is a risky start regardless, due to the situation and a decent Chargers run defense. Davis is a low-end flex this week. If you have a safer option with a higher ceiling, I would bench Davis in week 3.

Similar to what I wrote about Darnold above, this is not a situation that you want to be involved in. The Jets running back group is all over the place and there is no clear structure. Even with Gore being the “lead” back, he was not able to produce fantasy-wise last week. Keep all the Jets running backs on your bench/ waivers in week 3.

Desean is the last real starting wide receiver in Philly and has a solid matchup this week against Cincinnati. If he doesn’t produce this week, I don’t think he ever will. He should be one of Wentz’s main targets and should be able to produce flex numbers at the very least. If you need a decent floor with a high upside, Jackson is the perfect play this week. He is a mid-tier flex with a high upside.

The injury bug did not leave Atlanta unharmed as Julio Jones is currently dealing with a hamstring injury and his playing status for this week is currently in doubt. Regardless of whether Julio plays or not, Gage has been a solid fantasy asset through the first two games this year. Not only does he have a touchdown scoring upside, but he is getting a good amount of targets on a weekly basis. The Chicago Bears defense is not as tough as it has been in the past, and I believe the Falcons will have plenty of scoring opportunities in week 3. Gage is a mid-tier flex with upside in week 3.

If Tyrod was the quarterback, I would not be writing about Keenan. But that is not the case, so Allen is a solid start in week 3 against the Panthers. Justin Herbert was targeting Allen much more than Tyrod, and that should continue especially against a weak Panthers secondary. Allen is a high-end flex with upside ( especially in PPR).

Gallup just hasn’t been the late-round steal that we were hoping that he’d be this year. Ceedee Lamb has looked much more impressive through two games, and it is looking like he will continue as the Cowboys WR2 going forward. If you have better options this week, I would play them over Gallup. Gallup is flex with a solid floor but a potentially limited ceiling.

A week after looking like one of Tom Brady’s favorite targets, Miller looks to be the forgotten man in Tampa Bay. If he is not receiving the target share as he did in week 1, he is not serviceable to your fantasy roster. Chris Godwin and Mike Evans are back and healthy, which means Miller should be left on your bench/ waivers in week 3.

Fant has been amazing throughout his first two weeks and I don’t see that changing. Not only is he getting a solid target share, but he is also a red zone monster for the Broncos. Even with the change at quarterback, I still project Fant to have a solid fantasy day. Fant is a low end TE-1 with top upside at the position.

Schultz surprised everyone last week and was a total stud in week 2 for the Cowboys. This week he yet again has a decent matchup against the Seahawks, especially since the scenario of a high scoring game is a good possibility. If you need a streaming option this week, Schultz would be my go-to guy. He is a high-end TE-2 with an upside in week 3.

Mo was a solid streaming option in week 2 with Jack Doyle being out due to injury. If Doyle is out in week 3, I would be comfortable starting Mo once again as the matchup is juicy and his target share was enough to allow starting numbers. Mo is a mid-tier TE2 with upside in week 3.

Herdon is practically the last man standing in, but that doesn’t mean I want to start him. Even with him being the main option last week, Herdon was not able to produce a solid stat line. Herdon is a bench for me in week 3 against Indy.

Hooper has shown glimpses of what he had done in Atlanta last year over the last 2 weeks. But it has not been enough to make me want to consider playing him/ even stream him in week 3 against Washington. There are just too many options in Cleveland to feel comfortable using Hooper on a weekly basis. Keep Hooper on your bench this week.

Jimmy was good enough in week 1, but not so good in week 2. This week’s matchup warrants upside but it is a risky start overall. Unless he gets that touchdown, his yardage/ targets have not been enough to make me want to start him. If you have a more reliable option, I would leave Jimmy on the bench in week 3.