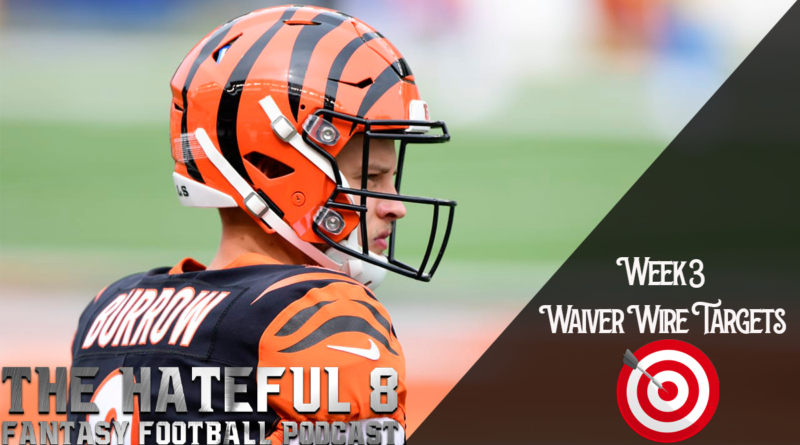 Gardner continues to impress, and outperform any expectations we had for him in the offseason. The past two weeks he has been a solid option for those who decided to play him. If you are currently unhappy with your current starter, Minshew would be my top choice on the waivers at the quarterback position. This week he has a great matchup against a beatable Miami Dolphins defense. Minshew is a high end QB2 with upside.

Ryan has been nothing short of great so far this season. He is continuing what he was doing last year, and I do not see that stopping anytime soon. The Tennessee Titans have been a solid force so far this season, and now they get to play a lackluster Minnesota Vikings defense. Ryan should continue his gameplay and is a solid streaming option. Ryan is a high end QB2 with upside depending on the matchup.

Burrow has been everything we expected and more. Simply put rookies don’t always produce in their first year, especially when you’re thrown into a less than stellar offense. Regardless, Burrow has been able to produce in his first two games. If you are looking for an upside play, Burrow has the ability to be exactly that. Burrow plays the Eagles this week, who have been susceptible to the pass. He is a streamable quarterback with a solid floor and a high ceiling. Burrow is a mid- QB2 with upside.

Last week we thought Brown was the running back to own in LA. Now it seems that Henderson is the one with the upside. Cam Akers is dealing with a rib injury but is said to be ok. Henderson for the moment looks to be the guy you would want in the Rams offense, and that is good enough for me. If you are running back needy, Henderson would be my top running back add this week. He does play a tough Buffalo Bills defense but should be able to put up solid production. Henderson is a mid-tier flex with upside.

It was injuries galore this week, and Mike was one of the top players to benefit. Now Christian McCaffrey isn’t out for the season, so Davis will only be relevant for around 6-8 weeks depending on Christians recovery. Davis does offer weekly flex value based solely on the amount of carries/ targets he should receive on a weekly basis. Davis is a low-end flex with upside this week in LA (Chargers).

We don’t know if Freeman is going to sign with the Giants or not, but it would make a lot of sense. Just be careful when using your FAAB or waiver priority on either of these running backs until we know how the situation plays out. But one of these guys is going to have solid value this season. The Giants are in rough shape, but even the worst teams can have fantasy-relevant players. If you are looking to roll the dice, the next lead running back for the New York Giants will have weekly flex appeal with upside( depending on the matchup).

Gage was on my honorable mention section last week, and this should be the last week he’s on the waiver wire article. The main thing you look for in a WR2/ flex is a solid number of targets and touchdown upside. Gage has both and has been consistent in both games this season. Julio Jones is also dealing with a hamstring injury which means Gage may be leaned upon more this upcoming week. Gage is a solid flex with upside going forward.

Very similar to Gage, Cole has been as solid as can be through two weeks for the Jaguars and fantasy players alike. He is receiving a decent target share and has touchdown scoring ability on any given week. This week the Jags face the Miami Dolphins on Thursday. If I were a betting man, I would put Cole into my lineup this week. Cole has weekly flex value, with a solid upside.

Someone outside of Edelman should have weekly value in New England, and so far it looks like Harry has the best chance to be that guy. He has received a solid target share over the last two weeks, and now we are just waiting on the touchdowns to come in. Harry is a solid bench stash or low-end flex with upside.

Boy was I wrong about Schultz. Schultz absolutely tore it up this past week against the Falcons, catching 9 passes for 88 yards and a touchdown. This was exactly the kind of break out we were expecting from Blake Jarwin. Schultz is risky as we have only seen him play in one full game this season, but at least we know what kind of ceiling he has. If your tight end isn’t producing, you could do worse than to stream Schultz this week against the Seahawks. He is a high end TE-2 with TE1 upside.

Jordan Reed seemed to be his old self this past Sunday against the Jets. With George Kittle being out, Reed became the TE1 for the Niners and one of the top targets for the team as well. With Jimmy G injured, we don’t know exactly what is in store for the 49ers pass catchers. But we also don’t know where Kittle is on his road to recovery. Regardless, Reed showed us what he is capable of doing when leaned upon. If you need an upside play at tight end this week, you could do worse than Reed. He is a high-end TE2 with upside( As long as Kittle is out).

Akins has been a true sleeper at the tight end position, but through two weeks he has been one of the more consistent options at the tight end. He would be practically free off of the waivers, so he does offer that appeal. He is receiving a larger target share and has a touchdown upside. Akins is a mid-tier TE2 with upside.