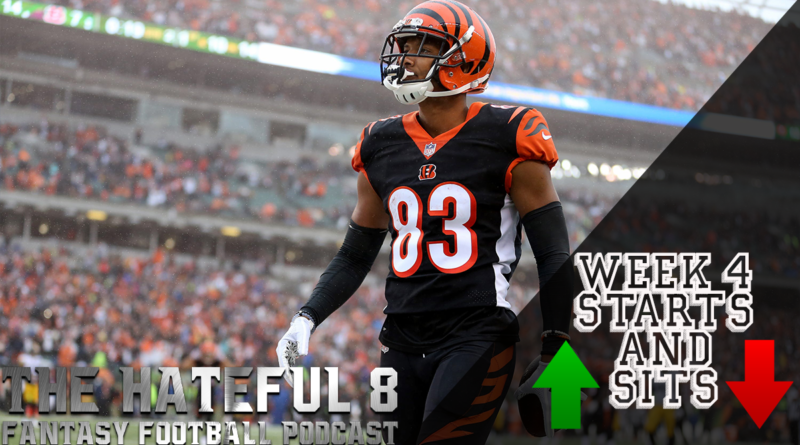 Week 4 is upon us, so of course, we need to know who to start and who to sit. Our start/sit article is not going to discuss the obvious players who should always be played. We examine matchups and usage from week to week, to give you the best chance at winning your weekly matchup. Good luck this week and don’t forget to not overthink it. Here are the Starts/ Sits for Week 4:

*** Players on the Steelers, and Titans will be out this week due to COVID. Please plan accordingly.***

Burrow has looked nothing short of amazing in his first three games this season. He is developing relationships with multiple targets on his team and should continue to improve as the season goes on. This week the Cincinnati Bengals face the Jacksonville Jaguars. Jacksonville has been giving up decent points to the Quarterback position. Joe is a low end QB-1 with upside.

Goff continues to impress in fantasy football. He is firing on all cylinders and has been able to score enough touchdowns to warrant starting him this week against a depleted Giants defense. Goff is a high-end QB- 2 with an upside in week 4.

Baker has been nothing special so far this year. He has all the talent surrounding him to succeed but has not delivered especially in Fantasy. This week they face the Dallas Cowboys and should be down for most of the game. Which should allow Baker to utilize his arm and have the highest chance at a solid fantasy day. Baker is a low-end QB2 with upside.

Wentz just isn’t the same player that we have learned to trust on a weekly basis in 2020. Something just seems off about Wentz, and now his offense is without two of his most trusted players in Desean Jackson and Dallas Goedert. The 49ers defense is no longer what they were last year, mainly due to injuries. But that does not mean that I would want to start Wentz regardless of this week. Wentz is a low end QB-2 with limited upside against  San Francisco.

Teddy has been solid through his first three games, but he hasn’t had the touchdowns to be considered a fantasy starter. Losing Christian McCaffrey did not help, but it does seem that the Panthers will still be a run-heavy team. The Arizona Cardinals also have been better than expected which does limit teddies upside this week. Bridgewater is a low end QB-2 with a limited ceiling in week four.

Foles is back in the spotlight, at least in Chicago. Foles is a better real-life Quarterback versus as a Fantasy Quarterback. Foles may very well be streamable in future matchups, but this week is not one of those games. The Indianapolis Colts have been a solid defense this year. I believe the Colts will limit Foles upside in week 4.  Foles is a low-end QB-2 in week 4.

Davis is the real deal. We weren’t sure how the distribution of carries was going to go for Carolina, but now we got a pretty good idea. Davis is the lead back until McCaffrey is back from injury. He is a weekly flex with a solid upside depending on the matchup. You can throw Davis into your RB2 spot with confidence in week 4.

If you had any doubt that Robinson was the workhorse for Jacksonville, you can put that doubt the rest. Robinson has all the characteristics you would look for in a starting running back. This week he has a juicy matchup against the Cincinnati Bengals. Robinson should continue to get the bulk of the carries and should be utilized in the passing game as well. He is a mid-tier RB2 with upside in week 4.

Henderson has proven that he can handle being the lead back for the Rams last week. Cam Akers is out for week 4, which means Henderson and Brown will be the two running backs left to handle the workload. I would assume that Henderson will get the majority of the work, which makes his matchup against the Giants even more appealing. Henderson is a low end RB2 with upside.

Through three weeks Gibson has been the most skilled running back for the Washington football team. As the weeks continue to progress, Gibson has continued to get better and better. The future is bright for Gibson, but I would hesitate to put him in my starting lineup this week against the Baltimore Ravens. Gibson is a low-end flex play with limited upside in week 4.

The Ravens backfield just isn’t what it was last year. It seems that they are perfectly happy spreading the ball between all three of their running backs. Which limits the upside any one running back can have on a weekly basis. Which is why I am sitting Ingram anywhere I have him. The Washington football team defense has also improved since last year. Ingram’s floor is low and his ceiling is low in week 4.

The New England Patriots running backs worked great last week, but it will be hard to rely on them week after week. James White is slated to play this week, which lowers the upside of all the other running back‘s. Unless you are extremely desperate, the Patriots running backs should be on your bench in week 4. ***At the time this article was published, Patriots at Chiefs are tentatively playing Monday or Tuesday***

Keenan Allen was once again a solid fantasy start last week with Justin Herbert as his quarterback. This week should be no different, especially since he will be facing a weak Buccaneer secondary (20th vs WRs). You should be able to start Allen with confidence. He is a high end WR2 with upside in week 4.

After initially thinking that AJ Green would be the leading wide receiver for the Bengals, we now see that Joe burrow trusts Boyd the most. Boyd should continue to lead the Bengals in targets going forward. Boyd is a mid-tier WR2 with upside against the Jaguars.

As long as he is healthy, Will Fuller is the kind of player you play on a weekly basis for his upside alone. The Minnesota Vikings are no longer an elite defense, which should only help Will succeed this week. Will has shown that he is capable of being the leading receiver on the Texans, and that should continue to be the case. Will is a high-end flex with upside in week 4.

Not only is he dealing with an injury, but the matchup against Baltimore is not appealing for Terry. Obviously, if you don’t have any better options, Terry is still a decent start as he is the leading receiver for the Washington football team. Just don’t expect a high for this week. Terry is a Flex play with a limited upside.

We had all thought that Jones was a value in drafts, but so far this year he has not had the type of success that we were hoping for. This week he faces the New Orleans Saints, who do have a solid pass defense. The chances of a high scoring matchup is the only upside Jones has entering week 4. If you have a more reliable option with a higher floor, I would recommend playing them on Jones this week. Jones is a low-end flex in week 4.

Similar to Jones , Hilton has been very disappointing so far this season. He may have some good games coming up, but it may be hard to know when or when not to play him. I’d rather take the upside of a player with a better matchup and chance of succeeding over Hilton this week against the Bears. Hilton is a low-end WR3/ Flex in week 4.

I was wrong about Jimmy last week, which is why I am fully on board with him going forward. Nick Foles loves to target his tight ends, and Jimmy still has enough gas left in the tank to be a solid starting option. The Atlanta Falcons have been one of the best matchups for tight ends, which only increases Jimmy’s chances of producing in week 4. Graham is a high-end TE2 with upside this week.

As I said last week, as long as Jack Doyle is out Mo is a decent fantasy start for the Colts. Rivers loves to target his tight ends, and it shows week after week. Mo is a mid-tier TE2 with upside in week 4 against the Bears.

Engram hasn’t lived up to his ability this season thus far, which makes starting him any given week very risky. The Giants run game is weak, which means they should rely upon the passing game. But that does not mean that the passing game will be productive, and we have seen that over the first three weeks. Engram is a risky play this week against the Rams. His floor is stable but his ceiling is limited due to the current situation the Giants are in.

Hooper just isn’t the same player that we know from a year ago. The Browns are a run-heavy team and passing comes second. They also have decent depth at Receiver which makes Hooper one of the last main options to receive targets. Hooper is a mid-tier TE2 with limited upside heading into week 4.

Gronkowski looked good last week, but the chances of that happening week after week is very low. The Bucs have too many options to risk putting Gronkowski in your starting lineup. Gronkowski is a low-end TE2 against the Chargers.