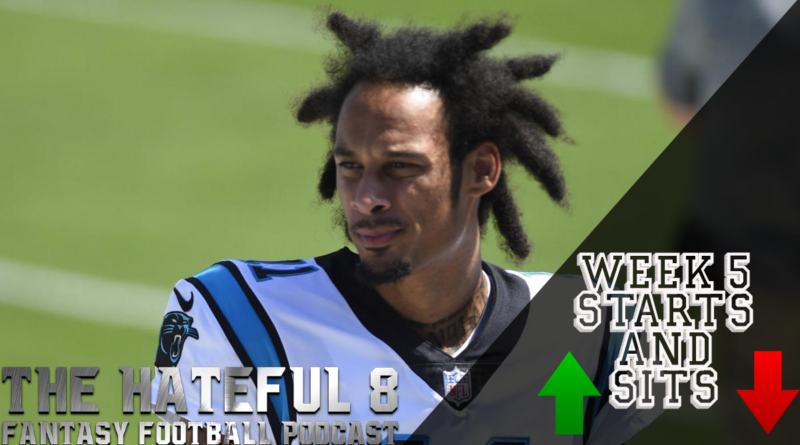 Week 5 is upon us, so of course, we need to know who to start and who to sit. Our start/sit article is not going to discuss the obvious players who should always be played. We examine matchups and usage from week to week, to give you the best chance at winning your weekly matchup. Good luck this week and don’t forget to not overthink it. Here are the Starts/ Sits for Week 5:

Gardner has been more reliable than not so far this year. The only week you wouldn’t have wanted to play him what is most likely the week most people played him and got burned. But I believe that the future is bright for him, and things should start connecting on a more consistent basis. This week he faces a Texans organization that is dealing with major issues within the team and management. The Texans no longer have a threatening defense, so Gardner should have a lot of success this week. He is a high-end QB2 with upside in week 5.

Teddy proved me wrong and was able to find the end zone multiple times last week. I like his chances to do the same this week against Atlanta. He is connecting well with multiple receivers and his run game has been strong even without Christian McCaffrey. Teddy is a mid-tier QB2 this week versus the Falcons.

Cousins has been hot and cold so far this season, but his new connection with Justin Jefferson offers a lot of promise going forward. This wiki face is a Seattle defense that is no longer the elite defense we knew from years past. Cousins has streaming ability and what should be a high scoring game against Seattle. Cousins is a mid-tier QB2 with upside.

Carson was surprisingly streamable last week against a tough 49ers defense. This week I believe will be different as the Pittsburgh Steelers just had a week off to refresh, and also are one of the top three defenses in the league. Carson may have some garbage time production which elevates his fantasy stats, but the risk involved is not worth it. Carson is a mid-tier QB2 with a limited upside this week.

Joe has been incredible so far this year, but this week’s matchup is unfavorable. The Baltimore Ravens will be Joe’s greatest test so far this season and we will see his true potential in this matchup. But the chances are that it could be a low scoring situation, at least on the Bengals side of the ball. Joe is a mid-tier QB2 with a limited upside. If you have a more stable option, I would play them over Joe this week.

Baker had a sweet match up last week and was not able to get the fantasy production that he should have. This week he faces a much improved Colts defense, which makes me hesitant to have him in my lineup. Baker is simply a low-end QB2 with a limited upside in week five.

This might be the last week we talk about Davis, as Christian McCaffrey is slated to come back from his injury next week. Regardless Davis has been exceptional since he took over the lead back role for the Carolina Panthers. This week they face the Atlanta Falcons defense that has been thrashed by teams week after week. Davis is a low-end RB1 this week with upside.

Similar to my Davis, James Robinson has been nothing short of amazing since being named the starting running back for the Jaguars. This week he faces a Houston defense that has been totally susceptible to the run game. He should have a lot of success this week against Houston. Robinson is a low-end RB1 with upside in week 5.

Johnson has been a little disappointing so far this year, overall has been a consistent flex option through 4 weeks. This week Johnson faces a Jacksonville defense that was just obliterated by Joe Mixon and the Cincinnati Bengals just one week ago. I like Johnson’s chances of outproducing his rankings this week against Jacksonville. Johnson is a mid-tier RB2 with a solid upside in week five.

Gaskins has been a great waiver addition so far this year, as he has had the very least flex value week after week. I understand that the running back position has been hit the hardest so far this year, so it may be hard to sit him this week. But if you can, I would. The 49ers defense has been solid against the run, and could really limit Gaskin’s ability in week 5. Gaskins is a high-end flex with a limited upside in week 5.

The Rams running back situation is as annoying as they come. One week you think it is Henderson and it turns out to be brown and vice versa. So there is no real telling who is the lead back for the rams going forward. This means playing either is risky even if the matchup is appealing. This week the matchup is not appealing which makes me want to bench them either way. If you have better options, I would lean playing them over these two in week 5.

It is pretty much the same story in New England, except now the offense is worse because Cam Newton is out due to COVID. Playing any of the Patriots running backs week to week is a boom/ bust kind of play, where they have no floor and no ceiling. Unless you are desperate, I wouldn’t start any of the Patriots backs this week against the Broncos.

Anderson has been the best wide receiver on the Carolina Panthers thus far and has the best relationship with Teddy Bridgewater. This week he has a great matchup against the Atlanta Falcons and should continue his positive production. Anderson is a low-end WR2 with upside this week.

Chark had been dealing with an injury over the first few weeks, but now looks to be fully healthy. In week four he was Gardner‘s favorite target and looks to be in last year‘s form. This week the Jaguars face a weak Texans defense, I like DJs chances of succeeding in week five. DJ is a low-end WR two with upside.

Lamb has been one of the most consistent receivers so far this year. It looks like he is the WR2 on the Dallas Cowboys, but has WR1 upside on any given week. This week the Cowboys have a great matchup against the New York Giants, Lamb should have plenty of success this week. He is a low-end WR2 with upside.

The New York Giants as a whole have not been impressive so far this season. They have had tough matchups, and have been hit with injuries throughout the weeks. This week they probably have their best matchup so far against a week Cowboys secondary. Even with the good matchup, I’m still hesitant to start Slayton until I see things become more consistent in New York. Slayton is a boom/ bust flex play in week 5.

Higgins has gradually taken over as the WR2 in Cincinnati over the last two weeks, and I believe that is going to continue going forward this season. But this week will be a tough matchup for him against the Baltimore Ravens. Higgins is a low-end flex with a limited upside in week five.

Harry hasn’t been the best, but he has been a flex play throughout the first four weeks. Without Cam Newton behind center, Harry’s upside has been capped. He is an extremely desperate flex play until Cam comes back.

It looks like you should play any and every Tight End that faces the New Orleans Saints this year, Hunter Henry is no different. He comes into a great matchup where the Chargers should be playing from behind most of the game. I like Henry’s chances of a solid target chair as well as touchdown upside this week in New Orleans. He is a low-end TE1 with upside.

Dalton has been as good as they come at the title and position since taking over for Blake Jarwin in Dallas. This week he faces a beautiful New York Giants defense, I expect there to be plenty of targets to go around. Which means Schultz should have a good day against the Giants. He is a high-end TE2 with upside in week 5.

If there is one position that the Philadelphia Eagles cannot cover, it is the tight end position. Eric Ebron comes into Philly with a great match up and a fresh set of legs after having a week off. If you are in need of a bye week fill, Ebron is the perfect player with a solid floor and a high upside this week in Philadelphia.

Hooper got into the Endzone last week, which made him a viable play position. This week he faces in Indianapolis Colts that are first against the tight end position. I expect this to be a very run-heavy game, with a limited upside for Hooper in week 5. I would aim to play a tight end with a higher ceiling than Hooper this week.