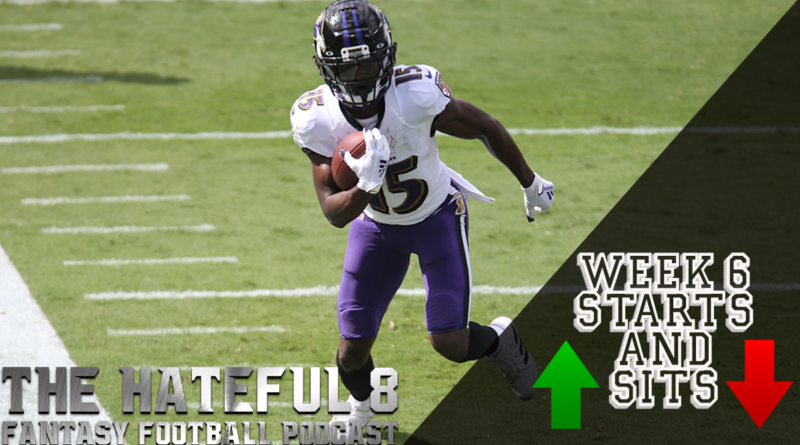 Week 6 is upon us, so of course, we need to know who to start and who to sit. Our start/sit article is not going to discuss the obvious players who should always be played. We examine matchups and usage from week to week, to give you the best chance at winning your weekly matchup. Good luck this week and don’t forget to not overthink it. Here are the Starts/ Sits for Week 6:

Gardner once again has a great matchup against a weak Detroit Lions defense in week 6. He should have all of his weapons healthy in this matchup, and I like his chances of having a successful fantasy day. Gardner is a high-end QB 2 with upside.

Fitzpatrick has been as solid as they come since week two, and this week he has a great matchup against a miserable New York Jets organization. Fitzpatrick should have no issue slicing and dicing the Jets defense and should find his way into the end zone multiple times. Fitzpatrick is a high-end QB 2 with an upside in week 6.

Cousins let down his fantasy managers last week, but I do not predict that will happen this week. He faces one of the worst defenses in the league and should feast on Sunday. Dalvin Cook is potentially out, but Alexander Mattison should slot in and fill that role decently. Cousins should have no problem moving down the field and utilizing all of his weapons. Cousins is a solid bye week fill-in, he is a mid-tier QB2 with upside.

Carson was able to put up a solid fantasy day last week against a stout Pittsburgh Steelers defense. But I do not believe that it’s going to be the same situation this week against a Baltimore Ravens defense that has been performing week in and week out at an elite level. For those managers that are dealing with by weeks, I would look elsewhere for a player with a safer floor and a higher ceiling in week six. Carson is a low-end QB2 with a low upside.

As I had assumed, Joe was not able to perform at his usual level against the Baltimore Ravens last week. This week he faces an Indianapolis Colts defense that is probably one of the most improved this year. He should be able to perform at a better level than last week, but the upside is capped overall. Joe is a low-end QB 2 with a low upside in week 6.

The New York Giants and Daniel Jones have looked miserable this year. It is just not their year, and the team can’t catch a break. They were able to perform at a higher rate last week against a bad Dallas Cowboys defense, but the Washington football team defense is nowhere as bad. His floor is low, and his upside is limited. He is the epitome of a boom/bust QB. Jones is a low-end QB 2 with a limited upside in week 6.

for what most fantasy managers paid for Gascon, Gascon has been a complete value so far this year. This week he has one of his best matchups yet and should perform decently. Gaskin is a mid-tier RB 2 with upside against the Jets.

Robinson did not perform as well as he could have last week, but that was mainly due to the game script. I believe that he is going to have one of his best weeks yet in week 6 against the Detroit Lions. He should receive plenty of carries and should have a decent amount of targets throughout the game. Robinson is a low-end RB1 with upside.

It is very clear now that Freeman is the guy in New York. He is receiving a solid number of carries and is doing damage in the passing game as well. This week he faces a Cardinals defense that can be beaten on the ground and through the air. Freeman is a high-end flex with upside in week 6.

You most likely weren’t starting Gore this week, unless you were very desperate. With the team cutting Le’Veon Bell, you will be led to believe that Frank was the lead back. You would be right, but that does not give him any more value than if that was still on the team. The New York Jets running back situation is a mess, one in which I would be avoiding at all costs. Even in a solid matchup, Gore is only a low-end flex with a limited upside in week 6.

The Rams back field is a mess. One week we think it’s brown, next week we think it’s Henderson. In reality I don’t know who the guy is going to be this week. It very well could be Akers. They all have upside, but when all three are healthy the upside is limited. Hopefully this week we will see who gets the majority of the reps. If you have an option with a clear workload, I would recommend starting them over all three of these running backs.

Similar to the Rams backfield, the New England Patriots backyard is healthy and packed. The chances that you’ll get the right guy in the backfield is difficult. So it is very risky starting one of the New England Patriots running backs until we see one of them continuously produce. I would prefer playing running back with a safer floor and a higher upside in week six.

Brown finally came through for his fantasy managers and had a solid game in week five. This week is looking pretty sweet for him, as he has a great matchup against the Philadelphia Eagles. Brown should continue to have success, he is a low end WR2 with upside.

Jefferson had a less than stellar week last week in Seattle. I don’t think that will be the same story this week against Atlanta. The Falcons is one of the worst defenses in the league and is giving up major points on a weekly basis. I like Jefferson’s chances at rebounding this week. Jefferson is a high-end flex with a great upside in week 6.

Terry was dealing with an injury as well as horrible QB play last week, so I will give him a pass. This week he faces a Giants defense that is letting up a lot of yardage against wide receivers. I like Terry’s upside this week. He is a low-end WR 2 with upside.

Travis has been a stud since taking over a starting job for the Philadelphia Eagles. He has received over 5 targets in each of his last two games, and there’s a good chance that he will do so once again. But there’s also the chance that the Ravens will shut down the Eagles offense this week. Travis is a risky flex heading into week 6.

Higgins once again was targeted a decent amount of times and had flex production against the Ravens. This week he faces another top tier defense, so his ceiling is once again capped. If you have a better option, I’d prefer to use them over Higgins this week. He is a flex with a limited upside in week 6.

MVS wasn’t able to have solid fantasy production when Adams was out. His chances at doing so this week against a good Tampa Bay defense is low. If you have an option with a higher floor and ceiling I would recommend using them this week. MVS is a low-end flex with a limited upside.

Mike has a great matchup this week against the Jets, and I like his upside at getting in the end zone. Gesicki has been one of Fitzpatrick’s favorite targets and that should continue into week 6. Gesicki is a low-end TE 1 with an upside in week 6.

Hockenson was off last week and comes into a juicy matchup against the Jaguars. He is one of Stafford’s top targets, and that should continue this week. Hockenson is a low-end TE1 with upside.

I was off of Hooper last week, and he ended up being a solid tight end starter for another week in a row. Hooper is not a streaming candidate, if he continues his success then he will be a weekly starter. Hooper is a high-end TE2 with upside.

The matchup is nice, but Knox has not had much success this season. The targets are going elsewhere, and Knox is decently down on the list. I would look for a tight end with more consistent production than rolling the dice on Knox in week 6.

Tyler just isn’t having the same kind of production that we saw at the end of last year. He is receiving the target share needed to succeed but ultimately has not been able to produce on a regular basis. If you have a more reliable option, I would have Higbee on my bench in week 6.

Smith had a good week last week, he does have a decent matchup against the Atlanta Falcons this week. But I believe that he is too risky to put into your starting lineup until we see him take over the lead tight end job in Minnesota. Smith is a low-end tight end 2 with a limited upside.