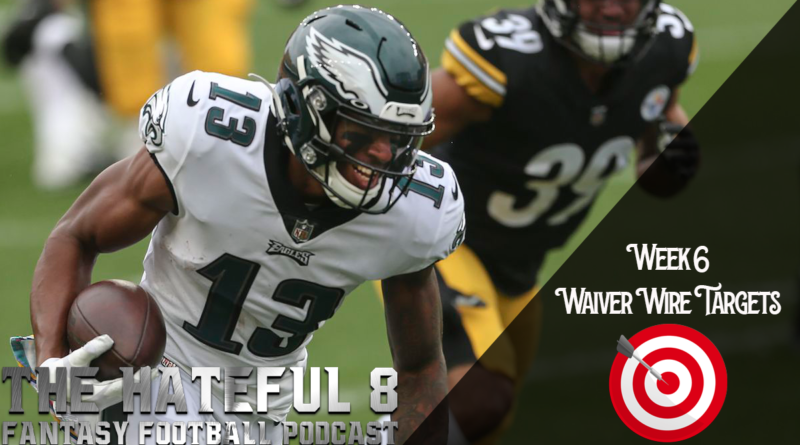 Herbert was lights out last night against the New Orleans Saints. He has been performing way above any expectation that we had before the season started. This week the Chargers have a buy, so Herbert would be a stash for the future. Herbert has the streaming ability, and the upside to be an every-week starter going forward. If you have a bench spot available, adding Herbert this week would be a smart move.

Fitzpatrick has been a QB-1 since week two, and he’s literally just sitting on your waiver wire. It is pretty impressive, but we see it every year with Ryan. This week he faces a Jets defense that is getting crushed week in and week out. If you are in need of a quarterback because yours is injured or is not performing well, Fitzpatrick would be my top option for this week. He is a high end QB-2 with upside.

Jared has been great over the last two weeks and he has all the talent surrounding him needed to succeed going forward. This week he faces a 49ers defense that was just wrecked by Ryan Fitzpatrick and the Miami Dolphins. I like Jared‘s chances of doing the same. If you need a bye week fill-in, Goff would be a solid choice in week 6.

Mattison is now the guy in Minnesota, at least for this week. Which makes him the top waiver add, especially for those who are running back needy( which means all of us). He should automatically fill in as a low-end RB1 with upside. This week he has a juicy matchup against the Atlanta Falcons. He is a top waiver priority add in week 6.

Chase has been solid when given opportunities, we saw an example of that this past week. Hopefully, at some point, the Cardinals will continue to use him more and more as the weeks go by. At the very least he is a top-tier handcuff, but can very well have standalone value. The running back waivers are getting very thin, if you need an upside to add Edmonds would be my selection. He is a low-end flex with upside on a weekly basis.

Honestly, I don’t wanna write about McKissic, but the waiver wires are really thin. For whatever reason, he received a lot of targets this past week and barely has had a floor throughout the season. If you are extremely desperate, then you can consider adding McKissic. He has a good matchup against a beatable Giants defense in week 6. He is a low-end flex with a limited upside.

The man, the myth, the legend. Chase was a complete stud this past week. Now we cannot count on this type of touchdown production, but I do believe that the future is bright for Claypool. He is the top add at the wide receiver position. Claypool can be looked at as a high upside boom/bust pick going forward.

Similar to Claypool, Travis looked amazing in week five. The Eagles wide receiver depth is extremely thin, I believe Travis will continue to have success in this offense on a weekly basis. If you need a bye week filling, Travis is a great addition to any roster. He is a low-end flex with plenty of upsides, especially in PPR.

Laviska has been the most consistent wide receiver on the Jaguars dating all the way back to week 1. He has a decent connection with Gardner and it looks like it is getting better and better week after week. This week Laviska has a great matchup against a week Detroit secondary. He should have flex value with upside going forward.

Robert had off last week, which might let some people forget about what he did two weeks ago. Before his bye week, Robert was the TE-1in fantasy football. If you are in need of a tight end, Robert should be your priority add this week. He has all the upside you could ask for at the tight end position.

I’ve been heavily against Hooper since he joined the Browns. But over the last two weeks, he has been a serviceable tight end and offers streaming ability on a weekly basis. He’s not totally relying upon touchdowns, as he has received a handful of targets in both of his last two matchups. Hooper is a high-end tight end 2 with upside going forward.