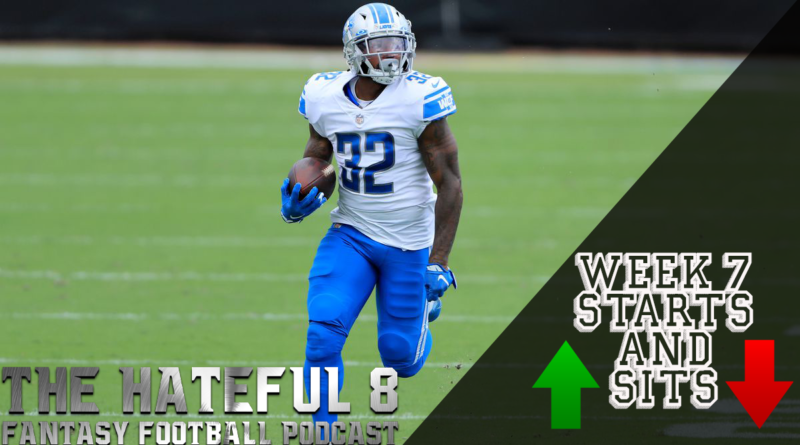 Week 7  is upon us, so of course, we need to know who to start and who to sit. Our start/sit article is not going to discuss the obvious players who should always be played. We examine matchups and usage from week to week, to give you the best chance at winning your weekly matchup. Good luck this week and don’t forget to not overthink it. Here are the Starts/ Sits for Week 7:

Carson has performed well in his last two match-ups against elite defenses, so this week should be a breeze for him. Your face is a New York Giants defense that is ranked as one of the worst in 2020. I like Carson’s chances of performing at a high rate Thursday night. Carson is a low-end QB1 with upside.

Herbert has been the best rookie quarterback at least fantasy-wise so far this season. After a nice week off, Josh should continue his great performance against a weak Jacksonville Jaguars defense. With plenty of weapons and a weak opponent, Herbert should be in your starting lineup in week 7. He is a high-end QB2 with upside.

Ryan was once again a solid start last week, mainly because his WR1 Julio Jones was healthy and back in the lineup. With a healthy offense and a subpar defense, I like Ryan heading into week 7. The Detroit Lions offense should keep them in the game, and their defense is weak enough to let the Falcons have great success. Ryan is a high end QB2 with upside in week 7.

Goff is simply unreliable. He has great weeks and then he has terrible weeks. This week he faces a Chicago Bears defense that is still able to control offenses and limit the QB position. If you are desperate, you could start Jared. But you have to know that he is a low floor/ low ceiling play this week against the Bears. He is a low-end QB2 with a limited upside.

Derek was solid for most of his matchups this year before his bye week. I believe this week will be one of his toughest matchups, as the Tampa Bay Buccaneers have been a great defense in 2020. Derek is still worth rostering as he is a streamable quarterback depending on the matchups. But this week he is a low-end QB2 with limited upside.

Jimmy looked great last week, but I don’t see the same outcome coming against the Patriots. The Patriots still have a good enough defense to limit the quarterback position. He should be left on your bench/ waivers in week 7. He is a low-end QB2 in week 7.

Swift finally showed up for the Lions In week six, and hopefully, he will continue that production in week seven. The matchup is fantastic, which only helps me feel positive about what Swift can do this week. He is a high-end flex with upside in week 7.

Antonio hasn’t necessarily had the production that we had wanted so far, but he has been a flex value in most weeks. This week he faces terrible Cowboys defense, which gives him upside especially in the passing game. Gibson is a flex value with upside in week 7.

Joshua let a lot of people down in the game before his bye week. The Chargers have a two-headed monster at the running back position, which might lead things to be murky in the future. But I still believe Joshua is the better of the two running backs and faces a great matchup against the Jaguars. Joshua is low-end flex with upside in week 7.

If there is one position that the Eagles are able to defend, it’s the running back position. Freeman is undoubtedly the lead back for the Giants, but as we saw last week that does not mean he will be able to put up great numbers. This week should be one of his more difficult matchups, which leads me to want to sit Freeman due to his limited ceiling. Freeman is a flex this week with a limited upside.

Gore was able to put up flex numbers last week, but the running back situation in New York is disgusting. The production can go to any number of the running backs on the depth chart, which makes me want to sit all of the New York Jets running backs. Gore is a low-end flex in week 7.

Edmonds is the superior talent in the Arizona backfield, but I don’t think Arizona sees it that way. Until he is given a more consistent workload, Edmonds is nothing more than a low-end flex on a weekly basis.

Fulgham has looked simply amazing over the last three weeks, and his production should continue. The Eagles Offense is completely depleted which should allow Travis to receive a ton of targets on a weekly basis. The matchup is also pretty sweet, as the Giants are giving up tons of points. Travis is a high-end flex with a great upside in week 7.

Higgins has been solidly consistent over the last 3 weeks, and it should continue going forward. Even in tough matchups, Higgins was able to succeed and have great production. The matchup against the browns is nothing to worry about, Higgins should once again be slotted into your WR2/ flex. He is a high-end flex with upside in week 7.

Like the other two receivers on this list, Claypool has shown great promise over the last two games. He not only scores through the air but has been used in the run game as well. It no longer matters if Diontae Johnson is healthy or not, Claypool should be started on a weekly basis. He is a high-end flex with upside in week 7.

Davis should be playing this week, but that does not mean that you should be starting him. Davis was playing well, but I believe that was because of the other injuries on the Titans. With AJ Brown being healthy, it is likely that Davis will not be targeted like he was in weeks past. He is a risky play, especially against a stout Pittsburgh Steelers defense. Davis is a low-end flex with a limited upside in week 7.

The Dallas Cowboys offense is a wreck. With the injury to Prescott, the team is no longer elite on the offensive side of the ball. Gallup was a boom/ bust play before the Prescott injury but is now simply a bench/drop. Gallup is a desperate low-end flex play in week 7.

Harry just isn’t what we were hoping he’d be, at least not yet in his early career. He has shown glimpses of ability, but it has not been consistent enough to warrant starting him. Harry should be benched this week against the 49ers. His floor is literally zero, and his ceiling is capped due to his usage.

Hockenson has sneakily been one of the most reliable tight ends so far this year. He has not had a huge game but has been exactly what you would want from your starting tight end. This week he has a great matchup against the Atlanta Falcons and should have success in week 7. Hockenson is a low-end TE1 with upside.

Henry has been hot and cold so far this year but comes into week 7 with a great matchup against the Jaguars. The Jaguars are one of the worst teams when defending the Tight end position, and I like Henry’s chances at scoring in week 7. Henry is a low-end TE1 against Jacksonville.

Over the last three weeks, Austin has been a streamable tight end. He should now be entering the weekly starter conversation as he is receiving a healthy dose of targets on a weekly basis. Hooper is a high-end TE2 with upside in week 7.

The situation in Dallas is not good, and that doesn’t change for the tight end position either. Schultz was having hot and cold production with Dak, and now has Andy Dalton throwing him the ball. I would aim to play a TE with a higher floor and ceiling than Schultz this week against Washington. Schultz is a low-end TE2 in week 7.

Higbee has been a disappointment outside of that one massive game that he had earlier in the season. He is not the consistent player that we knew from the end of last season. Higbee should be started only if there are no better options left on your waivers. But don’t expect a high upside play. His floor is low and so is his ceiling.

Ebron has been a disappointment as well, as he has only had one game in which you would have been happy if you’d played him. The Pittsburgh Steelers just aren’t targeting their tight ends as they have in years past. They have a very talented receivers group, that is taking the majority of the targets. Ebron is a low-end TE 2 in week 7.