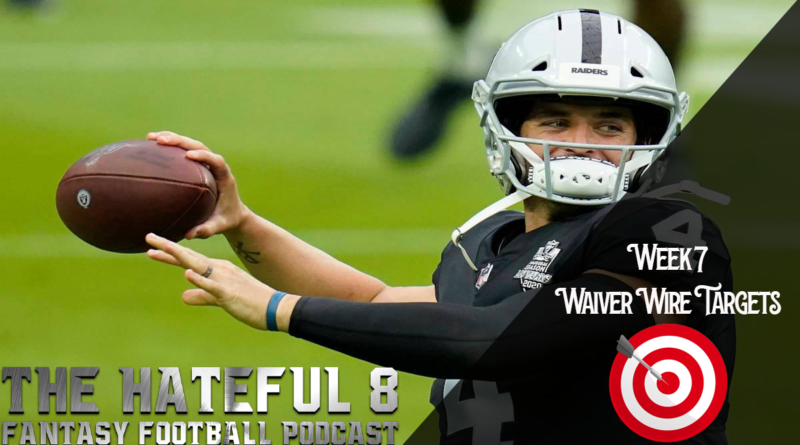 Before his bye week, Derek was a solid streaming option for most weeks. This week he faces a tough matchup but considering how shallow the waivers might be at the quarterback position Derek is worth a roll of the dice. Going forward if you need an option that can have a solid floor/ QB1 ceiling, Derek should be able to perform at a streaming/ starting caliber.

Jimmy is finally back from injury, and he looked good this past week. This week he faces a good Patriots defense, but they are not the Patriots defense that we have known in the past. Jimmy has the ability to be a streaming option this week. If you need a bye week fill in, Jimmy should offer you a floor that you’d be comfortable with.

Those who are extremely desperate could work at Kyle Allen this week against the Dallas Cowboys. The Cowboys defense is playing horrible, which means that if Allen plays the whole game he should have a decent fantasy day. Allen is only for those that have no better option in week 7.

The Eagles backfield is a mess, and there’s a good chance that Miles Sanders will miss the Eagles matchup against the New York Giants on Thursday. That being said, the Eagles will most likely use a combination of running back’s on Thursday. Boston Scott should be at the top of that list, and the matchup is very nice against the Giants. Scott should be a serviceable flex/ bye week fill-in in week 7.

McKissic was once again targeted heavily in last week’s matchup. He should continue to have value as long as he is receiving the current target share that he is. McKissic is a flex with upside(especially in PPR).

Gore put up flex numbers in week 6, which makes him a low-end flex against a beatable Bills defense in week 7. If you are desperate for a running back, Gore would be a serviceable add in week 7.

Cole has been hot and cold during this season, but I believe that he has the ability to continue the production that we saw this past week depending on the matchup. Cole is a good addition for those who need wide receiver depth and should be a serviceable flex option going forward. He is a low-end flex with upside this week against the Chargers.

It seemed that Robinson was the replacement for Sammy Watkins this past week. As long as Watkins is out, I would assume Robinson would be the number 2 receiver behind Hill in Kansas City. Robinson is a low-end flex with a high ceiling going forward.

Patrick has surprisingly been one of the most consistent wide receivers over the last four weeks. This week the Broncos face the Kansas City Chiefs and should be down for most of the game. If you need a high upside playing, I would add Tim Patrick this week.

Rodgers is the next man up for the Eagles and should have immediate fantasy value this week against the Giants. For those who lost Ertz or need upside at the tight end position, managers can add Rodgers. He is a mid-tier TE 2 with a good upside.

Anthony came in and played for the injured Jonnu Smith this past week. He did a great job and received a solid amount of targets in Smith’s absence. If Smith were to be out this week, Anthony would be a sneaky play against the Pittsburgh Steelers.

Similar to Anthony, Darren filled in as the starter for the Houston Texans this past week. He was targeted heavily and had success in the red zone. If he once again started this week, Darren would be a solid start against the Green Bay Packers.