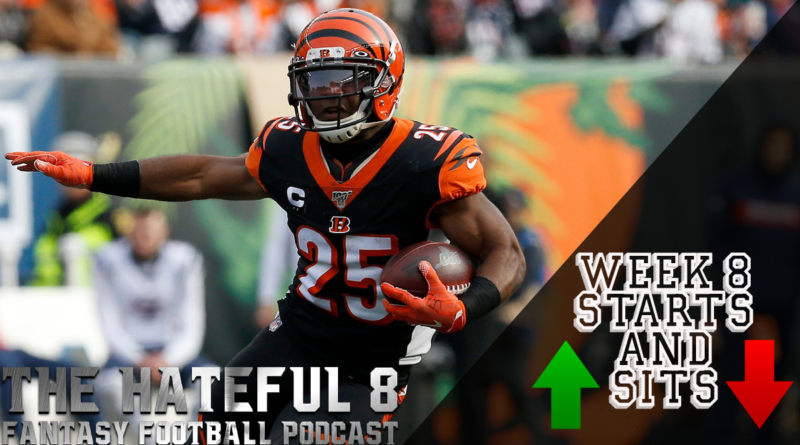 Week 8  is upon us, so of course, we need to know who to start and who to sit. Our start/sit article is not going to discuss the obvious players who should always be played. We examine matchups and usage from week to week, to give you the best chance at winning your weekly matchup. Good luck this week and don’t forget to not overthink it. Here are the Starts/ Sits for Week 8:

After a disappointing start to the season, Carson has been one of the most consistent quarterbacks for the past few weeks. This week he faces a depleted Dallas Cowboys defense. Carson should have no problem putting up great numbers. Carson is a low-end QB 1 with an upside in week 8.

Ryan has been consistent throughout most of the season thus far. This week he faces a below average Cincinnati Bengals defense. With a strong run game and all of his passing targets healthy, Ryan should be a streamable option this week. He is a high-end QB2 with upside.

Derek has surprisingly been a streamable QB throughout most of his matchups this year. This week is no different, the Cleveland Browns have been highly susceptible to the quarterback position. Derek has the weapons to succeed and has the matchup to put up good production once again. Derek is a mid-tier QB2 with upside.

Big Ben has had good games and then has also had average games this season. I am betting that this will be one of the more average / below average production kind of weeks. We all know Baltimore’s Defense is on the elite side and should be able to limit Pittsburgh’s upside on the offensive side of the ball. Ben is a mid-tier QB2 with a limited upside in week 8.

Jones has only been a streamable QB twice out of seven matchups this year. This week he faces a Tampa Bay Bucs defense which has been able to restrict the upside of opposing fantasy players. Jones just does not have the offensive weapons/ upside to warrant starting him this week against Tampa Bay. He is a low-end QB2 with a limited upside.

Stafford has been average so far this year but really hasn’t had any top 5 caliber games so far this season. This week’s matchup against the Colts should be his toughest yet. The Colts defense has been one of the best so far in 2020 and I could see them controlling the Lions offense throughout the game. Stafford is a mid-tier QB2 with a low upside in week 8.

As of writing this, Joe Mixon has not practiced yet this week. Which means Bernard should have the lead back duties in week 8. Bernard looked amazing last week while filling in for Mixon. I expect him to do the same this week if called upon against the Titans. Bernard is a low-end RB1 with upside.

Gordon has shown glimpses of being a lead back this year but hasn’t had the consistency that we had hoped he would. Phillip Lindsay is most likely going to be out this week due to injury. Which means that Gordon should be the main running back option. You can also say that this is a revenge match if you’d want. I like Gordon’s chances of having a solid day in the run and passing game. Gordon is a low end RB2 with upside.

Henderson isn’t the lead back for the Rams, that is clear. But in the two-headed monster that the Rams use, Henderson still has weekly value. This week he has a soft matchup against the Miami Dolphins. I like his chances of putting up good enough yardage to warrant starting him. Henderson is a flex with upside in week 8.

The Baltimore Ravens backfield is no longer the stronghold it was last year. It seems that they are perfectly content on using at least three bags every game. Unless there were injuries or one running back showed consistency, I would avoid starting any of the Ravens backs this week. They are all low-end flexes with limited upside.

We had hoped Devonta Freeman would have been the answer for the Giants, but it seems he can not stay healthy. It leaves Dion Lewis and Wayne Gallman as the remaining running backs. The matchup is not sublime and the players left at the top of the depth chart are lackluster. I would sit all of the Giants running backs in week 8.

Boyd has been great this season, a total value for anyone who took him in the late middle rounds of your drafts. He is the clear WR1 for the Bengals, and that does not look like it will be changing anytime soon. Boyd also has a great matchup this week against the Tennessee Titans. I like his chances of continuing his successful season this week. He is a mid-tier WR2 with upside in week 8.

Fulgham didn’t have the same success last week that he had in the weeks prior, but he once again received a heavy target share and was flex worthy. This week he faces an even better opponent in the Dallas Cowboys. Travis should have no problem being one of the top receivers again for the Eagles. He is a low-end WR2 with upside in week 8.

Nelson has sneakily been a consistent flex with touchdown upside over his last 3 matchups. Derek Carr seems to have trust in him, and I believe that will continue into week 8’s matchup against the Browns. Agholor is a high-end flex with upside.

Allen Robinson has a concussion, so he may very well be out for the Bears in week 8. Anthony Miller would then come in as the top receiver for the Bears but that might not matter for fantasy. The Bears/ Saints matchup is supposed to have terrible weather and extremely high winds. So aside from major starters in the matchup, I am leaning towards sitting most players. It should be a run-heavy game. Miller is a low-end flex with a limited upside.

It is pretty impressive how the Cowboys offense has imploded over the last few weeks due to injury. They are now on their 3rd string QB, which does not give confidence to the upside of their receivers. Gallup has been fading for weeks now. The matchup is the only positive that Gallup has going for him, as the Eagles haven’t had the strongest secondary this year. Regardless, Gallup is a sit this week for me. He is a low-end flex.

The Patriots current situation is a mess. Their QB play has been sub-par, and they have not had a stand out receiver for weeks. Julian Edelman is also injured which does not help their case. There are plenty of other options with better floors and higher upside than the Patriots receivers in week 8.

After having barely any upside in his first 5 weeks, Gronkowski has once again entered into the TE1 conversation. In his last two weeks, Gronk has had a touchdown and at least 5 targets in each game. This week Chris Godwin is out, which makes me like Gronk all that much more in week 8. He is a low-end TE1 with upside.

Henry disappointed those who started him last week against the Jaguars. This week he has a positive matchup against the Broncos. He should receive a decent enough target share to warrant starting him this week. Henry is a low-end TE1 in week 8.

Smith has been riddled with injuries and therefore hasn’t produced in fantasy as of late. I think that turns around with a great matchup against the Bengals in week 8. Jonnu is a solid TE1 in week 8.

Engram has disappointed all year and I don’t see that changing in week 8. He faces a good Bucs defense and is not receiving the target share to succeed. Engram is a low-end TE2 in week 8.

Cook is a touchdown-dependent tight end. So if he doesn’t get one, you’re most likely going to be disappointed that you played him. That being said, the weather for this matchup is going to be gross. I would bet on Cook not having enough success to be started this week. He is a mid-tier TE2 in week 8.

Ebron just isn’t receiving the kind of targets that you’d want him to this year. The Steelers focus more on the run game and wide receiver options over the tight end position in 2020. I would prefer to start a tight end with a better floor over Ebron this week against the Ravens.